Nick Walser explains how he sees and attempts to “do” the Four Noble Truths. 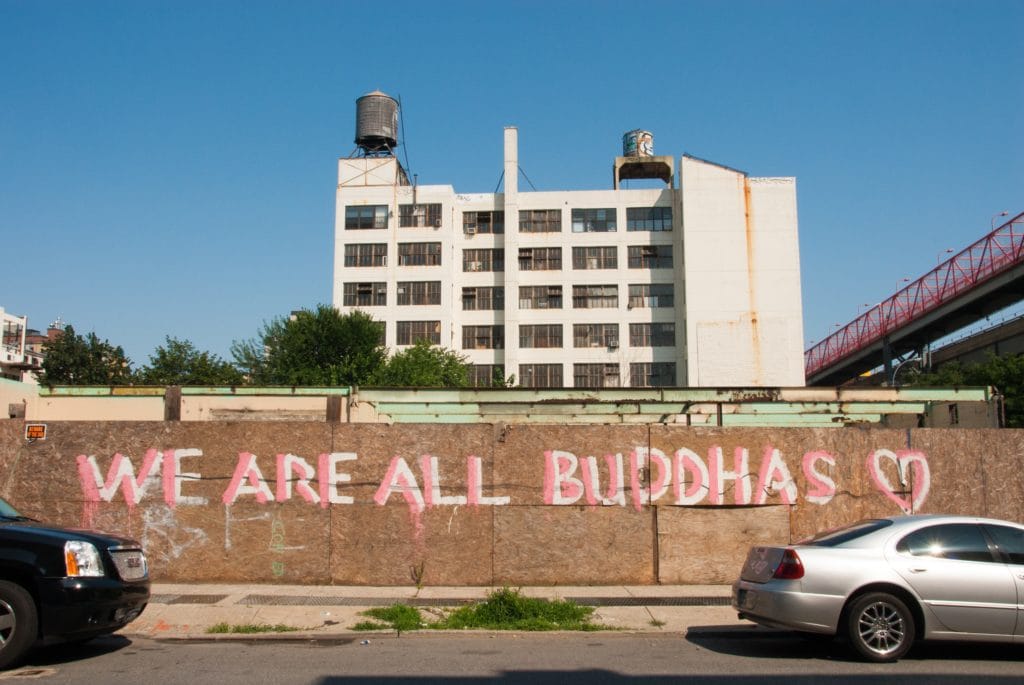 Some say they are to be practiced, that they beg to be investigated; some that they can’t be denied by dint of being Noble and being Truths. In any spiritual tradition the main concern is how to get with the teachings or the teacher. In the Buddhist scheme, it’s these four teachings that we are required to plug in to, but exactly how does that happen? I’d like to tell you how it happened, and happens, for me.

The first Noble Truth is one that is the most off-putting for many people: life is suffering, or contains suffering to some degree. I had always felt myself to be a happy, well-adjusted, positive person. Perhaps that was warning enough in itself. But it seemed somehow wrong of me, with my relatively affluent and privileged white male situation, to be entertaining any notion of suffering.  Suffering seemed like moaning, so I wasn’t ready to hit the First Noble Truth until it became clear that no, no, I really was suffering and that my life felt empty and devoid of meaning (things that, later on, are ripe fodder for your average Buddhist) which I experienced at a general, existential level. I felt lacking, even though I had a nice life. It was like a hole in the middle of things, and into it poured the contents of my life that I had held so dear: my relationships, my aspirations, my grand vision of life with me at the center.

I imagine that people come to Buddhism mainly because of their suffering, which takes care of the First Noble Truth. It would be astonishing to meet someone who felt so fulfilled, content and at peace that they decided to check out Buddha’s way just for the sheer pleasure of it, but I haven’t yet.

Our suffering then, however it’s experienced, hooks us into the Noble Truths almost without us noticing. It might be suggested that to be suffering is one thing; but to then investigate that suffering, and really see its troubling shape, is quite another.

Now that we have found out that we are suffering (and that it’s allowed even if you have “a nice life”) we can start to look for it everywhere, and most likely, it is everywhere that we will see it. It’s a bit like being a bird-spotter, but a really bad one who doesn’t even know what a sparrow* is: they’re all just birds to you, but then someone gives you one of those spotter books with the pictures and you realize “Geez! There are goddamned sparrows all over the place!”

I see the various Buddhist practices as a barometer or tally which we can hold up next to our lives and confirm the presence of suffering. Then we start to fill out details, and realize that the nature of the suffering has a particular quality. In zazen, I found that I was in pain, because I wasn’t really moving, ergo many of the movements and energy I had expended hitherto were an effort to avoid this pain and discomfort. I had been running away from the essential contents of my life because I was afraid of them, and I had told myself that to avoid was better than to experience. So, then, the Second of our Four sails into view, that suffering is compounded by grasping, whether with desire or aversion. When I did metta for the infuriating union guy with whom I’d had a furious row at work, I could feel my resistance to wishing him well. I’d cast him as the enemy, and the friction of that view rubbed away in my practice, until I was forced to wish happiness and ease upon the intractable dolt and saw how silly my rigid ideas were.

Would it have been possible to discover other things about suffering that aren’t in line with the Four Noble Truths?  For instance, I could have decided that suffering is caused by other people, and become a hermit, which I should add isn’t too easy in south-east England, but it could have happened. As long as I kept up my vigil for suffering (the First Noble Truth), alone in my cave (again not common in Sussex) even without anyone else around I suspect that I’d have encountered suffering, and realized that eremitism wasn’t the answer. This is the process Buddha went through with the yogis and hermits he visited and studied with. His story tells us what happens if you don’t happen to discover the Noble Truths right away.

Anyway, I didn’t become a hermit, and the Second Truth did seem to make sense. In seeing that, I could see that the habits of my mind were a strong influence in the texture and flavor of my life which sounds obvious to me now, but six or so years ago, it was a thrilling discovery. I had after all been lost in a life of fixated thought since I could remember, and yet here was the discovery of clear sky amidst the cloud cover. For Buddha, this was represented by the appearance of Mara. Until he saw Mara, Buddha was mired in the tangles of his mind, but once he saw the possibility for deception in the mind, there was his escape.

I often go into work with the thought “I’m just going to a have a nice, quiet day,” which is shorthand for not wanting to be bothered, and not having to make too much effort. As a thought, it’s fine: it comes and goes, and has no particular weight. But if I keep it hanging around, and try to live my day through it, everything that I deem a disturbance becomes difficult for me, a source of pain and dissatisfaction. The phone goes: it’s not someone who needs something, it’s an intrusion. I receive an email: it’s not the means whereby I complete tasks and therefore earn my daily bread, but the disturbance of my pristine peace. Mara isn’t the email or the phone-call; he’s the blueprint I’ve etched into my being with its demand that I “have a nice day.” As soon as I see or remember that, I can drop it. And so work becomes a pleasure-garden of ease and joy. Well, not quite. But it is easier. There appears the Third Noble Truth, that there can be a release from suffering, and that it’s real and everything.

Thus we come to the Fourth and last Noble Truth, which is where things get technical and Eightfold, and Buddhism starts to resemble a cosmic shopping list. Basically, the Fourth Noble Truth suggests that we do everything Right, which doesn’t seem like much of a revelation. But for me it means that we do what we can to support the vision of the first three Noble Truths. We get to find which actions, words, practice and so on encourage us to drop our cravings and aversions. I know that gossiping in the office about what such-and-such said to me will trigger feelings of righteousness, and next time I see them, I will paint them with that brush: that person said this stupid thing so I will treat them accordingly. And so the whole cycle sets off again. I know that although that first beer might be fine, the next one and the one after that may cause me to be less careful of the Eightfold Right things, and cause me and others needless suffering, and so again I have a perspective from which to act.

All the Buddhisms have their ways of doing what Buddha did, understanding what Buddha understood. We each have to discover again just what was going on there in India two and a half thousand years ago, and then somehow do it in Brighton, England or Scranton, Pennsylvania, or wherever. In my experience, the Four Noble Truths give us the knack for doing just this.

*Feel free to substitute your own local, common bird.