Like leaves in the autumn or wood in the fire, all things pass. But, there is a moment in which we can see things as they are. 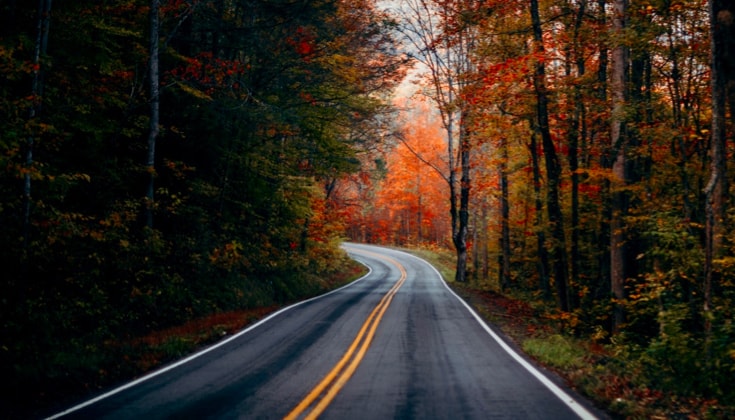 I discovered a mantra by a lake in the woods. We were on our way to the family cabin but, as someone who regularly copes with a panic disorder, I was paralyzed, as usual, by compulsive negative thoughts and anxiety. My mind went from shaming me for not keeping in touch with friends, to giving me a guilt trip for not seeing my mother that weekend, to blaming me for taking a vacation instead of working. It just wouldn’t stop.

When you’re thinking, you barely notice thoughts. A sentence plays out in your head, but it’s not spoken like the internal monologue of a cartoon character. It just is. And it’s indiscernible from reality. I was watching beautiful red and orange leaves falling in the autumn air along the road; but, as my migraine grew in intensity, I felt like I was driving straight to hell.

When we got there, we unpacked and built a fire. At the cabin, my partner found some firewood and started chopping it up. One of the logs was birch. He peeled off the paper-like bark and said, “In some cultures, they write their regrets on birch bark and burn it in rituals.” He gave me the bark, and I wrote down all my worst, most repetitive thoughts. The ones that never stop.

After I’d filled the front and back sides of the birch bark with what I soon realized were personal mantras — some written in neat sentences and some angrily scratched into the wood, some repeated several times and some shouting in capital letters — I took a break and set it on the coffee table. They screamed at me from there, but, once out in plain view, they were small. Barely even real.

That’s when I remembered another mantra. At the time I didn’t know what it meant, but I suddenly wanted to find out.

It’s a tough one to translate. In Vedic Sanskrit, svaha is a bit like saying “amen,” while bodhi means awakening. Literally, the mantra means “Gone, gone, everyone gone to the other shore, awakening, svaha.”

But “bodhi” and “svaha” together also mean something symbolically. In the vedic tradition, it’s a reference to the fire God Agni and his wife, Svaha. Her name, and this mantra, are sometimes invoked during fire rituals.

The sutra also appears in the Heart Sutra, one of  the most frequently used and recited texts in the Mahayana tradition. It is also one of the most perplexing. It’s original Sanskrit title is Prajnaparamita, the heart of perfect wisdom. In it, Avalokiteshavara, the Bodhisattva of compassion famously says to the student Shariputra, “form is emptiness, emptiness is form.” There is no knowledge, no student, no teacher. No eyes, no nose, no ears. No good, no bad. Nothing purely sacred, nothing really profane.

At the time of the vedics, it was commonly thought that gods could open the doors to nirvana on their own, but humans could not. This mantra says, “No! Enlightenment is not a privilege of the gods, or even priests. It is a natural human trait.”

Despite its great renown, Buddhist author and scholar Karl Brunnholzl wrote in his book, The Heart Attack Sutra, “One thing we can safely say about the Heart Sutra is that it is completely crazy. If we read it, it does not make any sense” – that’s coming from someone who loves it so much they wrote a book about it. And that’s fair, because this text “negates everything that we have learned and try to cultivate.” That’s exactly what I was hoping to do with my habitual thoughts.

The Heart Sutra says the final mantra is the ultimate, the “supreme mantra” which removes all suffering. How does it do that?

Zen teacher Norman Fischer says emptiness is also the key to the boundless compassion of Avalokiteshvara. In a Lion’s Roar, article Fischer wrote, “if I see the boundarylessness of me and you, and recognize that my suffering and your suffering are one suffering, and that that suffering is empty of any separation, weightiness, or ultimate tragedy, then I can do it. I can be boundlessly compassionate and loving, without limit.”

In the cabin, I slipped the birch bark under my pillow for the night, and in the morning I was ready.

We walked to the lake and fashioned a little wooden boat out of scraps along the shore. I placed the piece of bark in the boat, lit it and pushed it out onto the water. The air was cool, the water was still, the smoke was heavy.

As I chanted at the smouldering pile, I sent my negative thoughts away across the lake, to the other side.

Brunnholzl wrote that prajnaparamita can also be understood as “having gone beyond,” to the other shore. But going beyond does not mean “to go” anywhere. “We remain in the same ‘place’, if there is any, but we altogether change our outlook of what happens in that place and also of that place itself.”

Like so many of life’s problems, my smouldering thoughts didn’t float far. But on our way home, I found it in me just to watch the leaves fall.