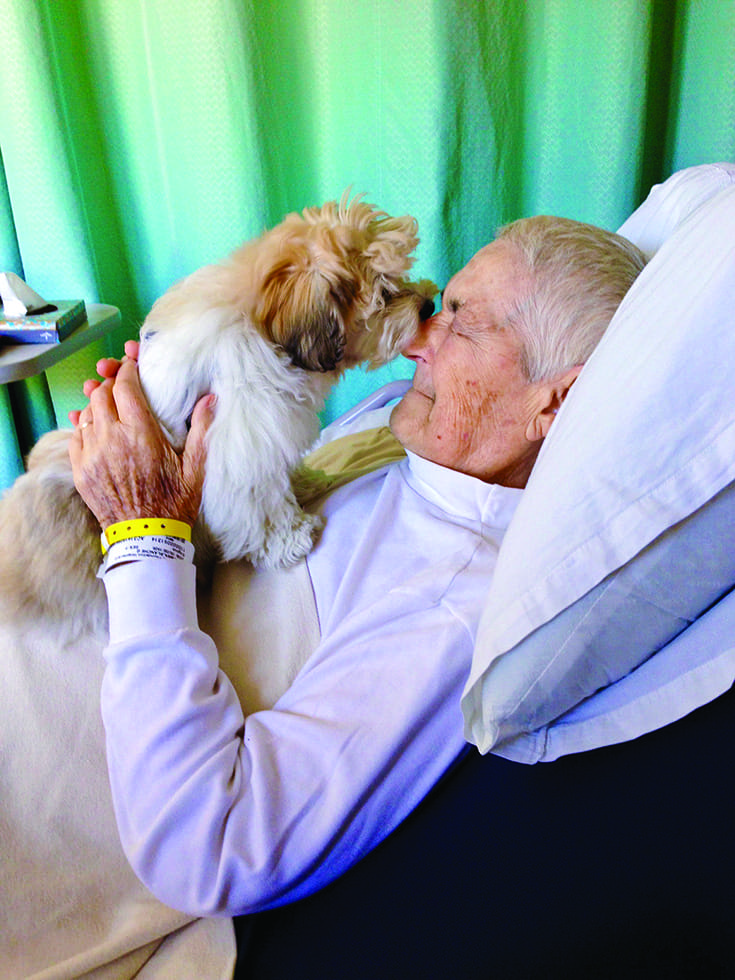 She was a force in American Buddhism—as a pioneering practitioner, a dharma teacher, and the first female abbot of San Francisco Zen Center. In this excerpt from her book, Seeds from a Boundless Life, the late Zenkei Blanche Hartman reflected on “The Great Matter” that drove and sustained her.

Just Being Alive Is Enough

In 1989 I had a heart attack. As I was leaving the hospital, I stepped out into the sunshine, and I had this sudden realization. “Wow! I’m alive. I could be dead. Wow, the rest of my life is just a gift.” And then I thought, “Oh, it always has been, from the very beginning. Nobody owed me this life. It was just given to me. Wow!” And in that moment of waking up, I found what a wonderful, rich feeling it is to be grateful to be alive. Just right now, right here, all the time. I don’t have to have anything more special than knowing that just to be alive is enough.

The great poet Emily Dickinson said, “To live is so startling it leaves little time for anything else.” And Brother David Steindl-Rast says, “The greatest surprise is that there is anything at all, that we are here.” And from Omraam Mikhäel Aïvanhov, “The day I acquired the habit of consciously pronouncing the words thank you, I felt I had gained possession of a magic wand capable of transforming everything.” So living this life of gratitude has really changed my life. I used to be both quite opinionated and quite ready to criticize anyone who didn’t agree with me. Now I recognize that my life depends on all the lives around me. We all support each other. None of us could take care of ourselves in a world all alone. We’re so completely interwoven and interdependent.

Our life depends on one another. And as you begin to realize that, you can’t help but be grateful.

Responsibility for the Gift of Life

Along with this gift of life comes some responsibility for supporting life, participating in taking care of this fabulous gift of life on this earth that we’ve been given. And this is a particularly important point now in our history, as we find that the way we are living is endangering the continuity of life. We see that we have to make some changes in the way we use fossil fuels, because we are in danger of poisoning ourselves and changing the climate of this earth sufficiently to make it uninhabitable, at least by creatures such as we are. There is a responsibility to having received this gift of life, and that is to take care of it in whatever way we can. I heard this quote some time ago: “Ours is not the task of fixing the entire world at once but of stretching out to mend the part of the world that is within our reach.” So we find out where we can make whatever contribution we can to the care of the earth and the other beings with whom we share it.

The Dalai Lama’s bodhisattva vow is “Every day, think as you wake up: Today I am fortunate to have woken up. I am alive. I have a precious human life. I am not going to waste it. I’m going to use my energies to develop myself, to expand my heart out to others, to achieve enlightenment for the benefit of all beings. I am going to have kind thoughts toward others. I am not going to get angry or think badly about others. I am going to benefit others as much as I can.” This is our essential vow as bodhisattvas. And of course, you are all bodhisattvas. Suzuki Roshi always used to begin his talks with “Good evening, bodhisattvas.” That’s what we’re here for, to be awake beings. And awake beings are awake to the deep connection we have with everything, with all living beings. We are all of one life, and we need to take care of that life so that it continues generation after generation.

It’s All about Love and Joy

I got a call that a dear friend of mine, who received precepts from me years ago when I lived at Green Gulch, was dying. I arranged with her husband to go and see her and give her the precepts again. One of the things that have been very helpful to me around this matter of birth and death—around this matter of my death, anyhow—is meeting death with great curiosity. What is it? We don’t know. We can’t know ahead of time. Can we be there for it and find out what this great mystery of birth and death is? When I went to visit my friend Jenny, I said to her, “Well, Jenny, it looks like you’re going to find out about the great mystery before Pete and I do.” She was on a hospital bed in her room, but she jumped up and threw her arms around my neck and said, “Blanche! It’s all about love and joy!” This was less than a week before she died. And so I thank you, Jenny, for that teaching. It’s all about love and joy. Can we allow that as a possibility in our heart as we study this great mystery? I know that I find myself, the older I get, imagining whether I could say such a thing on my own deathbed, but it certainly is what I’ve been talking about as I’m approaching my deathbed. That love and joy are really right here and available for us if we will open up to them. And I think familiarizing ourselves with the Buddhist teachings and especially the teaching on loving-kindness will help.

I received an e-mail letter from Jenny’s husband when she died. When they said good night, she said, “I’m going to meet the mystery.” Those were her last words to him. So, I offer you this line, “I want to be full of curiosity,” because it’s been a great sustainer to me over the years.

How to Live If You’re Going to Die

I came to practice because I discovered that I was going to die—me, personally. I just had never considered it before, but then my best friend, who was my age and had kids the age of my kids, had a headache one night when we were together. It was such a bad headache that she went to the doctor the next morning. She was diagnosed with an inoperable brain tumor, went into a coma, and died. Whoosh! Maybe a month altogether from the first headache.

Well, that could have been me as readily as Pat. Oh, my god! I’m going to die! But the next thought was, “How do you live if you know you’re going to die?” It has been such a gift to me that that question came up. And so I started looking for who could tell me how to live if I know I’m going to die. And I do know I’m going to die. So I’ll just share with you these Five Daily Recollections from the Upajjhatthana Sutra of the Buddha:

I chant every morning a sutra to the bodhisattva of compassion for the well-being of people in the sangha who are sick or people I know who are sick, and also for, as I say, the calm crossing over and peaceful repose of those who have recently died. Yet I found that when I was chanting just for Lou, my late husband, I was torn about calm crossing over and peaceful repose or many rebirths in which to continue your life, your bodhisattva vow. I wasn’t sure of such things. But his death caused me to pay more attention to those words.

Lou and I once rode together with a Tibetan teacher who was giving a workshop on dreams. Lou was very aware of his dreams and felt there was great significance in them. And in the course of driving down to the workshop and back, somewhere in the conversation Lou said something about himself, and Tarab Tulku Rinpoche said, “Oh, well, that’s because you were a monk in a previous life.” Now, Lou was so focused on being a monk—not a teacher, not a scholar, not a priest—just a monk. Perhaps he wanted to go on having many lives being a monk until the bodhisattva vow, of ending the suffering of all beings, was no longer necessary. Anyhow, I really appreciate Shohaku Okumura’s comments on death in his book Realizing Genjokoan:

Firewood becomes ash. Ash cannot become firewood again. However, we should not view ash as after and firewood as before. We should know that firewood dwells in the dharma position of firewood and has its own before and after. Although before and after exist, past and future are cut off. Ash stays in the position of ash with its own before and after. As firewood never becomes firewood again after it has burned to ash, there is no return to living after a person dies. However, in buddha dharma, it is an unchanged tradition not to say that life becomes death. Therefore, we call it “no arising.” It is the established way of Buddha’s turning the dharma wheel not to say that death becomes life. Therefore, we call it “no perishing.” Life is a position in time. Death is also a position in time. This is like winter and spring. We don’t think that winter becomes spring. And we don’t say that spring becomes summer.

The Great Matter of Life and Death

Throughout Dogen Zenji’s teachings, the question of birth and death, or life and death, is called “the great matter.” On the han [a wooden board struck with a mallet] that calls us to the zendo, we have this quotation that’s often chanted every night in a monastery in Japan: “Great is the matter of birth and death. All is impermanent, quickly passing. Wake up! Wake up, each one! Don’t waste this life.” There’s a sense of urgency to understand about life and death, and that’s what Dogen Zenji is speaking to. Common parting words to someone who’s leaving is to say, “Odaiji ni”—please take care of the great matter. It’s very central in Buddhist teachings.

“Life and death” is an English translation of the Japanese expression shoji. As a verb, the Japanese word sho (that is, the character that’s pronounced “sho”) means “to live” or “to be born.” And the second character, ji, is “to die” or “to be dead.” Thus, the expression can be translated into English as “birth and death” or “life and death.” Shoji is the process of life in which we are born, live, and die. It is equivalent to the Sanskrit word samsara.

Practice is a matter of life and death. This life is our practice. This practice is our life—because it’s all about birth and death. And we’ve all been born, and we’re all going to die.

Reprinted with permission of Shambhala Publications.