We want the sun; we get the rain. But where does the doorway of disappointment lead? Elizabeth Brownrigg on disappointment as a painful but necessary treasure. 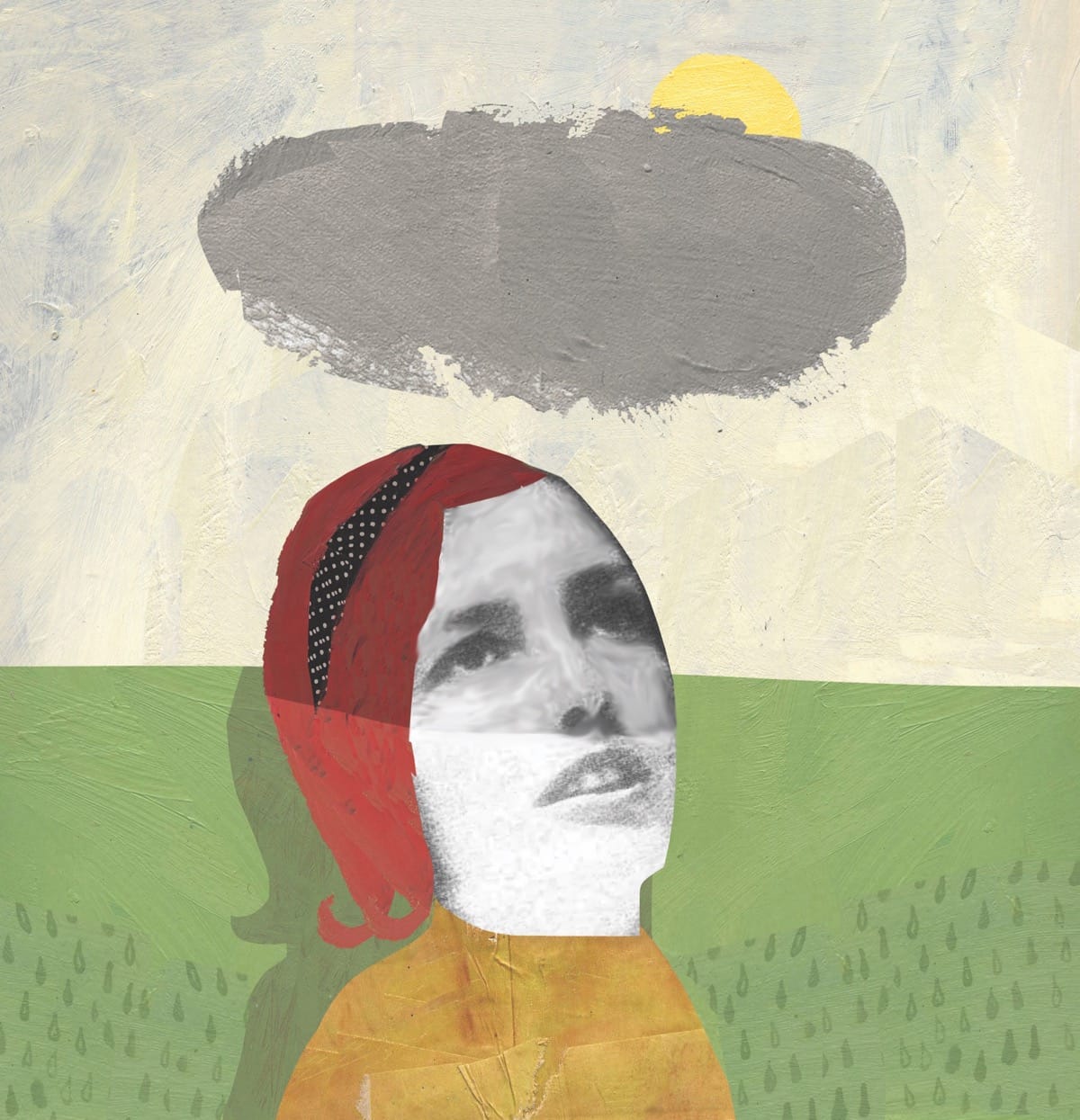 I’ve been disappointed by pretty much everything at one time or another: work, school, vacations, lunch, Desperate Housewives after the third season, marriage, friendship. The list goes on.

What are our disappointments trying to tell us?

We were staying at a resort on the Big Island of Hawaii. From the lanai that served as our kitchen, we could hear the rustle of palm fronds in the trade winds. The electricity depended on a generator, and when they said lights out at 10 p.m., they meant it; ready or not, we were plunged into the velvety darkness of the tropical night.

We drove to a black sand beach along a road lined by guavas ripe for the picking. Turquoise waves curved and exploded into white foam. Nude sunbathers, their bodies gorgeously tanned, dove into the sea. Children ran along the water’s edge and built obsidian castles from the shining sands.

A man rolled a joint and was suddenly surrounded by five new friends, all desperate for a hit. A little boy howled. His mother told him to shut up. She crouched next to the man with the marijuana, waiting her turn. The boy’s back was half-covered with an oozing, sand encrusted gash. The breakers were so rough we had to fight our way in, tossed about and gasping, before we could reach the deep swells beyond the surf.

Back at the resort, I opened the kitchen cupboard. A very large rat stared back at me. I hurriedly shut the door in its face.

On a bright winter’s day in Williamsburg, Virginia, I walked down a cobblestone street that stretched exactly one mile from the edge of the college campus to the end of the Colonial Williamsburg historic district. I was walking away from the school, down a road that led nowhere but the past. I had just flunked out.

Colonial Williamsburg was an empty, beautiful place with each building freshly painted, each boxwood trimmed to a perfect shape. There were no chickens wandering the streets, no sewage, no arguments, no signs of the lives that were lived there in the eighteenth century. It was a town historically accurate in its physical details, and much farther removed from reality than three hundred years.

I reached the end of the street and turned around to walk back to the school that no longer had a place for me. How could this have happened? I was cast adrift in this empty town of artifice.
I had been majoring in biology. I hated the stench of formaldehyde, zoned out during the lectures, was bored by the reading, dreaded chemistry lab, and yet was absolutely convinced that I should be a biologist because I loved nature so much. I had been punishing myself with positive thinking, ignoring the signs of my own discontent.

After my failure, I stayed on in Williamsburg and waited tables on the low-paying breakfast and lunch shift. I struggled to find what it was that I really loved. I tried writing poems and stories. There was one beautiful thing that I managed to notice through the fog of my misery. Every morning, as I walked past Bruton Parish Church on the way to my dead-end job, peals of organ music floated through the early spring air.

That hard time was an opportunity for gratitude. My college roommate kept me hidden in the dorm room, and spirited food from the cafeteria until I could find an off-campus apartment. After I’d been floating in a lost world for a few months, my parents took me back home and paid for a creative writing class.

I reapplied to college, and returned as an English major. I plunged happily into all the courses I had missed while I was pretending to be a biologist: “Tragedies of Shakespeare,” “Art of China,” “History of Film,” “Modern British Literature,” “Burmese Supernaturalism.”

Sometimes disappointment is the only thing that can slap you hard enough to wake you up. It turned out that the path of the writer was my way into the natural world. Now I write articles about bat surveys, birding festivals, sea turtles hatching.

When I was eighteen, I spent a summer as a nurse’s aide in the hospital where I was born, in the small town where I grew up. I worked the night shift.

It was a county hospital that served everyone, from the extremely wealthy to the most impoverished. I sat up with old farm women whose unbound hair flowed to their waists. I lit a cigarette for an ancient man who was as thin and dry as a stick. He suckled the cigarette in a single drawn-out breath until it was one long red ember.

In the nursery, a baby screamed. When I went to investigate, I saw a tapeworm six inches long writhing next to the baby’s head. The nurses told me that the anti-parasite medication had driven the worm out through the baby’s nose.

Edith was the other nurse’s aide. She was black and in her thirties, a generously proportioned woman who liked to make me blush by saying, “There’s nothing like a good, old-fashioned orgasm. Don’t you agree?” I nodded as though I had any clue what she was talking about.

We worked together on our rounds, changing sheets, taking temperatures, emptying urine from bloated Foley catheter bags. Edith wrote me little notes: “Dear Elizabeth, you are cordially invited to a Foley Cocktail Party!” Blanche was a patient who had come in for a gallbladder operation months ago and been braindamaged by the anesthesia. We changed her sheets and turned her so she wouldn’t get bedsores. She spent her waking hours wordlessly howling, except for when Edith said, “Blanche, Blanche, what’s the matter, baby?” Blanche grew silent and turned her unseeing eyes in the direction of Edith’s voice.

A young black man was admitted with a gunshot wound. He had to use a bed- pan. Edith tended to him with the gentleness of an angel. “He likes to keep himself clean. He doesn’t like to be dirty.”

Mrs. Clarke was the nursing supervisor. She had risen through the ranks and was a blend of skill and compassion. Every night she stopped in at the nurse’s station to shoot the breeze with the other RNs. She guided me through my menial tasks. She didn’t hesitate to call me on the carpet if I hadn’t been working hard enough or to compliment me when I’d done well. She set a standard that I tried to reach.

She wanted my help with a man who had had a colostomy, but first she asked me, “Are you sure you can handle this? It’s a pretty rough sight.” After we had emptied the colostomy bag and resealed the opening into his abdomen, she shook her head. “That man is riddled with cancer, and he never complains.”

Her nurse’s uniform was spotless and starched, her cap always pinned in place. We didn’t see doctors on the night shift. Instead, Mrs. Clarke ran a universe of patients in intensive care, newborn babies and their mothers, starving children, accident victims, and every possible condition, from the dying to the merely malingering.

At the end of the summer, Mrs. Clarke invited the staff to a cookout at her house. I asked Edith if she was going. She didn’t look at me when she said, “No, I’m busy that day.”

Mrs. Clarke’s house was a small brick ranch on the outskirts of a neighboring town. In the kitchen, the nurses were already drinking and laughing. Mrs. Clarke kept a sharp eye on me and wouldn’t let me near the alcoholic punch. The rest of the women were married with children of their own, and even a few grandchildren. I carried my potato salad to the picnic table outside and came back into the kitchen. Mrs. Clarke was in the middle of a story, “I don’t know what that nigger was doing, meeting her boyfriend out in the parking lot most likely.” She was laughing so hard she was almost crying. “Every single damn night. And you know she was all over that boy with the gunshot wound.” It took me a minute to realize who she was talking about. The wide grimace of racism was revealed like a skull’s grin beneath the skin. Edith had never been invited to this party.

I can tell you two things about Mrs. Clarke: She was an excellent nurse, and she was a bigot. Both are true. Each observation is like peeking through a keyhole and seeing only a tiny facet of the complicated person she was. As the privileged white resident of a southern town, I rarely noticed the racism that Edith encountered every day; the crack of disappointment exposed that truth.

When I left to go back to college in the fall, Edith’s farewell gift was a tiny red plastic pocketbook with a folded note inside: “Dear Elizabeth, I hope you will remember me.”

Where does the doorway of disappointment lead? If we’re willing to walk through it, we can see all possibilities: the caring nurse and the racist; the rat in the garden of Eden. We can discover the assumptions that we’ve been making all along. Disappointment is a necessary, painful treasure that reveals ourselves to ourselves.

Wouldn’t it be terrible if you were never disappointed again?

Elizabeth Brownrigg is the author of the novels Falling to Earth and The Woman Who Loved War.