When NeuroTribes author Steve Silberman got married in 2009, he and his husband found themselves in the middle of an American culture war. For them, embracing the word “marriage” was like opening the door to a secret garden. 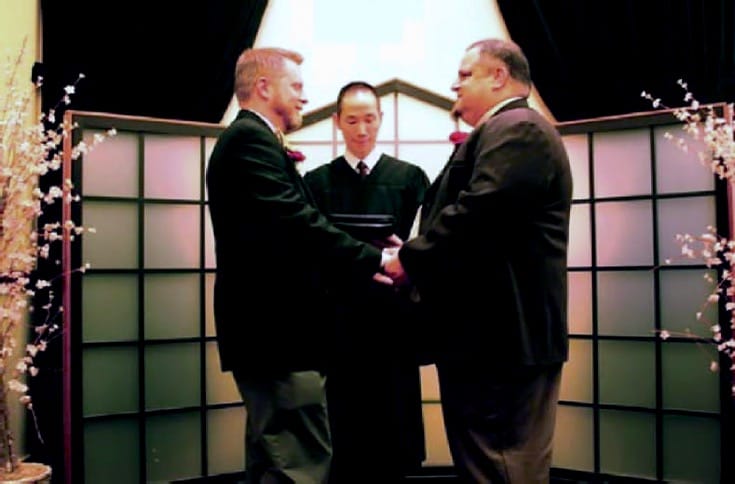 On a hazy August afternoon in 2001, I knelt on one knee and asked my beloved, “Will you marry me?” We were standing on a breakwater in front of a weathered house on Cape Cod that my family had been renting for nearly forty years. Keith looked tenderly at me with his big blue eyes. “Of course I will,” he said, and we both burst into tears.

Though we didn’t know it, my mother, father, and sister were watching this drama unfold with their faces pressed against the window. After being my best friend for seven years, Keith—a blond, soft-spoken young science teacher from the Midwest—was already treasured as a welcome addition to my hyperverbal East Coast Jewish family. The next morning, my mother filled a flowery hatbox lid with sand from “our” beach and spelled out Happiness is Steve and Keith! on top in plastic letters, like a pre-wedding cake.

We figured we would host a ceremony for our friends and families in San Francisco, where we live, the following summer. We knew we wouldn’t have any of the rights and benefits of other wedded couples, because marriage between same-sex partners wasn’t yet legal. But we wanted to celebrate the truth of what we had found together in the presence of everyone we knew.

Keith and I weren’t planning on starting a gay marriage revolution, outraging the religious right, or even committing a noble act of civil disobedience. We just loved each other a lot. We grew up in the same culture as everyone else, in which the fairy tales of childhood end with the phrase “and they lived happily ever after.” Trying to live happily ever after just seemed like the next step of our deepening commitment to one another.

Even my future father-in-law Kent, who was a church-going Republican mayor of a small town in Illinois, seemed to understand. The first time I met him, he took me aside and said, “I know you are very special to Keith, so that means you are very special to us.” There was such simple, human, Midwestern forthrightness in that statement. No banner-waving, no Biblical injunctions, no soap-boxing. Just a clear and compassionate message: We love our son, and we trust his ability to make the most personal decision of all.

A month after our engagement, our plans changed unexpectedly when my mother looked across the Hudson River one morning and saw an airplane explode into the World Trade Center. Suddenly asking all our friends to fly out to the West Coast didn’t seem like a good idea. We decided to wait another year.

Keith and I had our ceremony in 2003 at Greens restaurant, where I had waited tables as a Zen student in the ’80s. Our officiant was a gnostic Jewish Buddhist cancer survivor named Judith, and our recessional music was Frank Zappa’s “Peaches en Regalia.” We vowed to love, honor, and cherish one another, and exchanged rings inscribed with a line by Walt Whitman: “Every atom that belongs to me as good belongs to you.” Then we threw a big party.

The only person to talk politics that day was my father Donald, a college professor and lifelong advocate for social justice. My coming out in high school had been tough for him to accept, but he went on to become a champion for equality in the American Federation of Teachers. He gave the fight to legalize gay marriage a rousing toast, and even my new contingent of blue-eyed relatives cheered.

A few months later, our mayor, Gavin Newsom, began granting marriage licenses to same-sex couples. The first to wed were Del Martin and Phyllis Lyon, pioneering gay activists and advocates for women’s health, who had been waiting fifty years for that day. Newsom’s bold decision launched a firestorm of angry words about defending the sanctity of marriage from “activist judges” and brazen interlopers like Del and Phyllis. Gay people were accused of mocking the sacred institution of marriage with their flamboyant tuxedos and gowns. After a Texas court overturned a law against sodomy, U.S. Supreme Court Justice Antonin Scalia unleashed a torrent of disdain from the bench. He equated homosexuality with “fornication, bigamy, adultery, adult incest, bestiality and obscenity.”

Suddenly Keith and I found ourselves at the flash point of a raging culture war. Did we have to call it marriage? Wasn’t that an unnecessary provocation for those who take that word to mean getting to the church on time? What about framing our commitment with a less confrontational term like “civil union?”

Certain words, however, have alchemical power. A humble noun or verb can become a transformative mantra. Embracing the word “marriage” had a subtle but profound effect on our relationship, like unlocking a door to a secret garden that only other married people know about. Now our job was to care for that garden together—to nourish it, weed it when necessary, and give it the compassion and space it needs to grow and flourish.

Knowing the way to that garden proved to be a great comfort shortly after that, when my seemingly healthy, vibrant father suffered a heart attack at a union meeting and died a few days later. My heartbroken mother moved to San Francisco to live near us. And that same winter, our beloved house in Provincetown was torn down by the guys we had rented it from for years.

We had planned to make our marriage legal, but we didn’t get the chance. In the months after dozens of couples like Del and Phyllis were wed, further court decisions put a stop to the celebration at City Hall, and retroactively stripped these couples of their marriage licenses. State after state began passing bans on same-sex marriage, and President Bush announced his support for inscribing such a ban in the U.S. Constitution.

My mother, my beloved, and I returned to our beach one more time. My mother leaned on Keith’s arm as the ashes and bones of her best friend for fifty-four years tumbled into the water.

Keith and I were finally able to get legally married a year ago, following yet another court decision. My mother was one of our witnesses, with a box of Kleenex in her lap. We already felt married, but it felt good to take those humble vows again in front of a county clerk. The corridors of City Hall were full of beaming gay couples who had been together for decades. My father would have been happy that day too.

The election season was upon us, and I was doing full-time volunteer work to help put Barack Obama in the White House. One day, we received a glossy brochure in the mail featuring smiling portraits of Barack and his wife Michelle, urging us to vote for Proposition 8, an amendment to the California constitution to ban marriages like ours. I knew that Obama was on record as being against the amendment. But his statement, “I believe that marriage is between a man and a woman,” was emblazoned at the top of the brochure.

At the same time, the ads opposing Proposition 8 seemed to convey an extreme wariness of offending anyone. “No matter how you feel about marriage….” they began. And there were no glowing couples in the ads, which struck me like running a campaign against school segregation while being afraid to show any minority kids with textbooks in their hands. But the pro-8 ads went straight for the gut, linking marriages like ours with the rape of children and compulsory sex ed for kindergarteners.

Post-election morning was bittersweet. Like most of our friends, we were overjoyed that change would finally come to Washington. But the narrow passage of Proposition 8 tasted like sand in our slice of victory cake.

As a Buddhist, I vow to cultivate compassion for every sentient being, even those who are trying to legislate our love out of existence. I try to understand their fears about tinkering with an institution so fundamental to human happiness. I imagine that some of their sons and daughters are waiting patiently for the day they can finally be honest with their parents about who they really are.

The extraordinary truth about gay marriage is that it’s completely ordinary. Keith and I wake up at dawn, and I make him a sandwich to take to school. He gets kids excited about the wonders of the universe for a living, and I try to do the same thing for adults in my science writing. In a universe in which loved ones and tall buildings can turn into ashes overnight, it’s good to know where your garden is—whether it’s a committed relationship, a daily sitting practice, or a handful of earth and seeds. And it’s important to remember that happily ever after is getting shorter all the time.