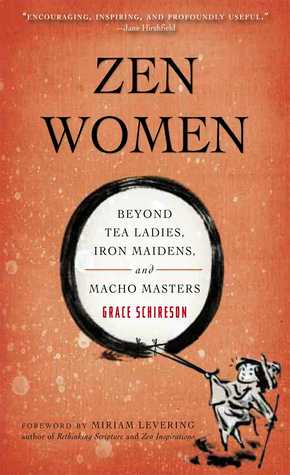 So here’s the thumbnail review: Read this book. What we know of Zen has been incomplete, because the part about women—their stories and their teachings through the ages—has mostly remained hidden from ordinary sight. Grace Schireson’s book is an important contribution toward making our understanding of Zen whole.

The heart of Zen Women is a survey of women practicing and teaching in China, Korea, and Japan from the earliest times to the present. The author connects this history to the Indian Buddhism that preceded it and to how things are evolving in the West, particularly in North America. It’s a lot of ground to cover, but much of this material has been available only in scholarly publications, and making it easily accessible, even in survey form, is a great gift.

Part 1 is called “Zen’s Women” and touches on the way women were portrayed in classical Buddhist and Zen literature. The arrangement of part 2, “Women’s Zen,” is especially engaging: the stories cluster around themes like nuns and family practice, and nuns and sexuality, showing how women in different cultures and eras have dealt with the same challenges—over and over again. Part 3, “Women and Zen in Western Practice,” consists largely of the author’s analysis of our current situation and her proposals for the future. It’s written from a particular point of view rather than surveying a variety of views, and so it will probably speak best to readers who essentially agree with the author.

This is a book filled with women ancestors and there’s enough material about some of them to get a real feeling for their lives and teachings. Previously unknown women, such as Zhiyuan Xinggang, a seventeenth-century Chinese dharma heir in the Linji (Rinzai) line, come to life. We read some of her poems, her practice instructions to students, and an excerpt from a memoir of her own training. The tenderness and genuine emotion with which the members of her community treated each other is palpable, as is their care for those they came in contact with. Discovering that the monks at the temple where she’d trained were suffering terribly from the cold, Xinggang and her nuns spent several months sewing leggings for them. By the time we read this verse, we believe her when she says:

In the gates and hall of the elders, the work of the lineage flourishes.
Knowing my own lazy ignorance, I’ve hidden away in order to be still.
Esoteric methods, blows and shouts—
I’m giving them all a rest.

We trust in Xinggang’s ability to find her own way in a school known for its severe methods, and we delight in her sly reference to the differences in her style: Too lazy to whack her students and yell at them? Too ignorant to be interested in esoterica? Among this book’s most important revelations is how some women were able to (re)discover the essential spirit of their lineage, and then create their own unorthodox ways of expressing that spirit. North American Zen has a bit of a problem with mistaking the customs of particular times and places for essential truth, and the stories about Xinggang and others are a refreshing antidote.

In addition to the stories of individual women, there are descriptions of several communities similar to the one Xinggang lived in. Perhaps the most famous is Tokeiji, a medieval Japanese convent where women found sanctuary from bad marriages and could eventually obtain divorces. Turns out that women walking the Way together developed unique practices like Tokeiji’s mirror Zen, in which people meditated in front of a large mirror. If the enlightenment poems that came out of this practice are any indication, it was effective for many women over many generations.

The book’s inclusion of modern voices, particularly from Korea, gives a sense of what has been continuous in the tradition and what has evolved. We see the shared concerns of some contemporary Asians and North Americans in the work of someone like Kim Ilyop, who advocated for women’s sexual freedom both before and after she became a nun. And we hear the living dharma, expressed with power and beauty. Here is a poem by twentieth-century Korean nun Song’yong Sunim:

These examples of confidence and clarity are all the more moving considering what the book reveals regarding the pernicious ideas about women and the dharma, and the rejection, threats, and physical violence, that many of our ancestors faced. Some of the most painful stories are of women who resorted to self-mutilation to gain admission to the monasteries of male teachers. Men sometimes went to similar extremes to demonstrate their sincerity, but it’s hard to miss that women disfigured themselves in a particular way: they “ruined” their faces so that they’d no longer be seen as disruptive objects of desire. There’s so much wrong with this picture that it’s hard to know where to begin.

We owe a monumental debt of gratitude to these ancestors for their courage and perseverance. It’s good to remember that some of us have always had to undergo trials in order to steal the dharma, either to participate in the schools from which we stole it or to create new ones. These stories poignantly suggest what has been lost and what never had the chance to develop. They also can provoke us to consider what has been gained: some very important things in this human life can only be discovered through struggle, won by courage, and made truly our own through acceptance.

As Schireson navigates this material, she is a conscientious and thoughtful guide through Zen’s philosophical ideas and terms of art, which means the book is accessible to Zen beginners and old-timers alike, as well as to readers from outside the tradition. I confess to longing occasionally for interpretations that are more sympathetic to the vividness and nuance of some of these stories, as in the one about Pang Lingzhao and her father Layman Pang, who were out and about one day when he tripped and fell. Lingzhao immediately threw herself down next to him, and he asked her what she was doing. “I saw you fall so I’m helping,” she replied. “Luckily no one was looking,” he said. The author sees Lingzhao as playfully acting out “the helpless tactics” of those who “see our loved one’s suffering, and we quickly react by throwing ourselves into their situation at the same emotional level, … trying to comfort them from the same perspective that is causing the problem.” Layman Pang hopes that “no one has seen how far she has moved from conventional behavior.”

When you take this story up as a koan and bring it into your meditation, quite different meanings emerge. Lingzhao’s throwing herself down obliterates the idea that there is a helper and a helped, suggesting that we are all falling together. It acknowledges that in some cases the most profound response to another’s difficulty is the willingness not to flee—by either abandoning the situation or escaping into “helping”—but rather to be willing to stay and accompany. Her father’s final remark becomes a comment on what it’s like when we relate to each other without self-consciousness. Instead of some third person judging the event, the one who fortunately isn’t looking is us—that is, our own inner tendency to monitor and pass judgment, distancing us from our interactions even as they’re happening. How free it is when we aren’t keeping score!

Zen Women focuses on the present-day in part 3 and aims to show how we can learn from the ancestors about “practicing with loved ones, practicing while working in the world, and adapting our training institutions to fit our actual lives”—developments which Schireson and many others see as essential to Zen’s survival in the West. This is extremely helpful in some cases, as when the author points out that women denied monastic life had to develop their own home-centered practices, and since home practice is what most Westerners choose for themselves, our ancestors’ adaptations and solutions could teach us a great deal. The discussion of relationship and sexuality feels less helpful, perhaps because it’s hard to do justice to these subjects in a few pages. Generalizations about male and female psychology are presented as self-evident, and a lot is left out. For one thing, there’s no explicit mention of lesbians or homosexuality, which is understandable when looking at ancient records but not so much when we’re talking about the present. The reader can only hope that phrases like “family and marital relationships” are intended to include arrangements other than the nuclear heterosexual one. For a book in which the costs of exclusion and erasure are so powerfully described, it’s a puzzling omission.

The author’s problem-centered psychological approach does begin to feel limiting. While it’s certainly possible that the emphasis on the difficulties of women involved in mainstream, institutional Zen is justified, it’s not the full picture. There is post-patriarchal Zen, in which the problems the author lays out are no longer central, or in some cases even relevant, to the experience of practice and community.

In the end, readers will find their own relationship to the material, and I can imagine rich discussions among friends and in practice centers coming out of reading the book together. Because of Grace Schireson’s work, our understanding of Zen is more whole. Now we have these ancestors to accompany, teach, and inspire us.

Joan Sutherland, Roshi, is a founder of the Pacific Zen School (a contemporary koan school), as well as the founding teacher of The Open Source, a network that includes sanghas in Colorado, Arizona, and the Bay Area. Now retired from working directly with students, her teachings continue through Cloud Dragon, an online source for her writings and talks. She is the author of Vimalakirti & the Awakened Heart and Acequias and Gates: Miscellaneous Writings on Miscellaneous Koans.