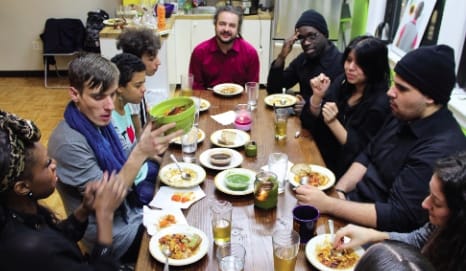 Living in New York City, there is no shortage of joy or suffering. They’re all around you, on a daily basis. As a practicing Buddhist, I strive to see it all clearly, but when I arrive at work, that can get very difficult.

I cofounded a nonprofit called the Reciprocity Foundation, which operates a holistic center for homeless teenagers on the West Side. Some days, the problems that appear in front of us loom so large that it’s hard to really take them in.

Thankfully, homeless youth are generally open to change. Some of our students reconnect with their will to live through yoga classes and meditation retreats. Others awaken their hearts while making a film, listening to a guest speaker, or simply talking quietly with a caring adult. Homeless youth are a wonderful population. They shoulder the consequences of our worst social problems—poverty, drug addiction, bullying, sexual abuse—and are still willing to open their hearts after as little as one profound interaction with a loving adult.

For the past seven years we have offered services—both conventional and contemplative—to help homeless youth realize their potential. Because before they can put effort into selecting a vocation, a college program, or a career path, they must first wake up to their own potential. Too many are pushed into school or work before they feel ready, and that’s risky. When disconnected youth are pushed too far, they can disengage further, setting off a vicious cycle of isolation.

But for a long time there was one service we did not offer: meals. Our reasoning was that youth shelters had it covered, providing three meals a day for residents, and soup kitchens distributed brown-bag lunches. We can’t do everything, we told ourselves. We’ll focus on personal transformation and let other agencies focus on food.

But in 2012, it seemed that more students than ever were complaining of hunger. How can that be? We asked them, and the answers were hard to swallow. The food served at shelters was heavily processed and meager in nutritional value. Sometimes the food didn’t arrive at all, and when it did, it was often cold or late. Some of our students developed rashes or digestive problems after a few months on the “shelter diet.” Others complained of headaches, dizziness, and low energy. Still, I didn’t think Reciprocity should create a meal program—until I met a homeless young girl named Jada.

Jada always wore a scarf around her neck and refused to take off her coat. One day, she told me she had read Eat, Pray, Love by Elizabeth Gilbert three times, and wished she could eat what the author ate in Italy because the food would make her happy. “When I eat,” she explained, “I usually feel sick or break out in a rash.” She unwrapped her scarf and showed me the large swath of red pimples that covered her neck. “I have these all over my body, and now I’m scared to eat at the shelter.”

I needed no further convincing: it was time to start a healthy vegetarian meal program. We bought a large slow cooker and began serving homemade vegetarian chilis, soups, and curries to our homeless students. The meals coincided with our evening programs, so students were offered sustenance for body and mind alike.

Jada was a bit suspicious of our vegan concoctions at first. She would ask for a small portion, take one bite, and then find a reason to rush off to check email. “This food won’t hurt your body. I promise,” I’d tell her. It was a few weeks before she would eat a full dinner. “This is good,” she teased, “but I bet the food is even better in Italy.”

As our vegetarian meal program began to pick up steam, our students began to “wake up” during mealtimes. Those who were prone to drift off or send texts during workshops began to gather around the slow cooker to find out what was in it and how it was being prepared. Students asked questions about vegetarianism, cooking techniques, and the varieties of vegetables and spices in the pot.

We invited students to contemplate their relationship with food. We asked them, How does your body feel when you eat at the shelter? What do you wish for most at mealtimes? “A home-cooked meal” was the answer we expected, but what they actually said was much more powerful. Some students admitted that mealtimes at the shelter provoked “intense loneliness.” One student said she longed “to eat slowly, rather than wolf down my food and run into my room.” A group of youths said they wanted to “talk—you know, really talk” to someone during mealtimes. Jada suggested that we recreate the Thanksgiving meal in Eat, Pray, Love by giving thanks in turn—even when it wasn’t a holiday. Homeless youth, we learned, are starved for both meaning and nutrition.

This fall, we expanded our food program. Reciprocity now offers the largest vegetarian meal program for homeless teenagers and young adults in the country. We are determined to serve food and inspiration, in equal parts, to youth in crisis. To address the inner hunger our students feel, we designed a ritual inspired by Jada’s obsession with Elizabeth Gilbert’s memoir: After taking a seat at the Reciprocity farmhouse table, our students reflect on something for which they are grateful. That might mean giving thanks for a cot at an emergency shelter, or even expressing gratitude for the profound experience of being homeless.

In my line of work, compassion can feel like a strong ache. I hear about a homeless youth’s pain and I want to do something to make it better, so the ache will go away. But the Buddha taught that compassion should be more than a fleeting impulse. We have to keep returning to the well of suffering and drink deeply from it. A year ago, my work at Reciprocity was about trying to fix tiny bits of suffering. Now I am learning to uncover suffering layer by layer and remain open-hearted, even as I see that suffering has no end. Sitting with my students’ hunger, I have learned that it was more vast and complex than I had imagined. But instead of feeling depressed and overwhelmed, I tried to use this view to inspire a more expansive solution.

Now mealtimes at the Reciprocity Foundation have become opportunities to nourish and rejuvenate homeless youths’ distracted minds and broken hearts. Last week, I listened to Jada giving thanks—not because she’d accomplished her dream of gorging herself in Italy but for her life right here, in a New York City shelter. After giving thanks, she turned to another student, and they began to talk openly and honestly about their lives. Their eyes glistened with hope. At that point, even if the food were to run out, I knew that it would be okay. Our students would still leave our center feeling full.

Taz Tagore is cofounder of the Reciprocity Foundation and has spent nearly twenty years volunteering at youth shelters and working with homeless youth in the U.S., Canada, and India. She lives in New York City, where she tries hard to practice meditation amid the sound of jackhammers, her homeless students’ phones ringing, and her five-year-old daughter’s endless stream of knock-knock jokes.