It’s your special day, so why not bring some dharma to the proceedings? James Ishmael Ford shares tips on how to do it—while not weirding anyone out. 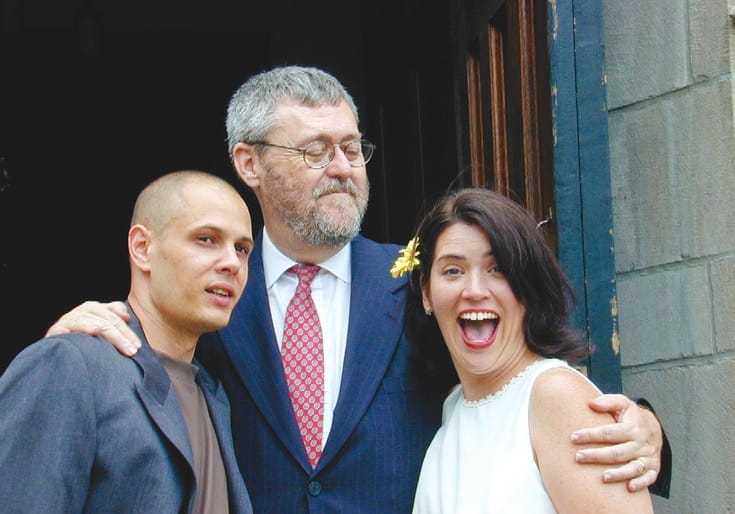 As a Zen priest and Unitarian Universalist minister, James Ishmael Ford has officiated weddings for all kinds of folks, including Lion’s Roar digital editorial director Rod Meade Sperry and his wife, Maura, in 2002.

What does it mean to have a Buddhist wedding? It’s hard to say. As far as we know, the Buddha didn’t take a position on marriage. The most we have from him are a few comments about some of the difficulties of marriage, and his reminders to be kind and generous. As to same-gender marriage, since you ask, the Buddha had nothing to say about that at all. He also didn’t have anything to say about monogamy, polygamy, or polyandry. (Some find references to a “third sex” interesting, but these were always made in regard to monastic life, not marriage.)

Back then, Buddhists hoped that more and more people would turn from the householder life, embrace celibacy, and follow the great quest for liberation. This has continued to be a strong current within many forms of Buddhism today. A consequence is that, unlike the other great religions, Buddhism does not have traditional religious marriage ceremonies.

Each culture within which Buddhism has found a home deals with marriage in its own way. For the most part, Buddhist clerics have not traditionally officiated at weddings; although monks or nuns might attend a wedding, their presence is seen as a blessing. Or the couple might visit their home temple after the wedding for a brief formal blessing.

Today in the West, many convert Buddhists, as well as immigrant and birthright Buddhists, want marriage vows that both express their Buddhist values and respect of Western cultural norms. Often, they are concerned about the expectations of non-Buddhist family members who will attend the wedding. This means, more often than not, creating a custom wedding service.

The single most important thing to remember is that the heart of the wedding service are promises made between the couple. Without these there is no wedding, and no marriage. With that clearly understood, the rest can be worked out.

Whether your wedding has Buddhist elements or not, there are some common ways to frame these promises in a wedding in the Western tradition. These include:

Near the conclusion there’s an exchange of rings, a pronouncement, a kiss.

Without these elements present, people will likely come away from the ceremony with the sense that something was missing, probably without being able to say exactly what. So I always recommend that this broad structure be retained. It will make the service recognizable to everyone present, and can easily be enriched and personalized.

Within that framework, here are some simple ways you can bring dharma into your wedding:

Of course, as meaningful as any of these gestures might be, don’t be discouraged if you can’t make them fit into your special day. Ultimately, in a wedding — just as in a marriage — kindness, compassion, and the promises made between two people for a life together are the secret elixir. Live up to the promises you make to each other on your wedding day and your marriage will be a blessing in this world.