Friday night, in celebration of his new book of collected poems “How to Live on Planet Earth,” the San Francisco Poetry Center and Green Arcade Books hosted a tribute to Nanao Sakaki in a mattress factory. 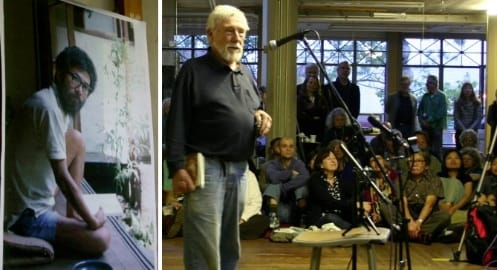 A young Nanao Sakaki oversaw the procedings in this blown-up photo; Gary Snyder addresses the gathering. Photos and text by Steve Silberman.

Nanao was a wonderful Japanese poet, ecological activist, and Zen rascal. When he was growing up in Japan during World War 2, he was drafted into the army. He was on radar duty the day that an American B-29 brought death to Nagasaki; he saw the little blip come in on his screen, and then the mushroom cloud rising in the distance. (“It’s a volcanic eruption!” some of the soldiers said.) After that, he became a lifelong wanderer, free Zen spirit “in the lineage of the desert rat,” original Japanese hippie and founder of a commune on Suwa-no-se island, and friend of American Beat poets including Snyder and Allen Ginsberg.

I had the pleasure of spending a couple of days with him, Gary, and Allen in the 1980s that included the most intense breakfast I’ve ever had: buckwheat soba with lots of wasabi, oysters on the half shell, green tea, and beer. He was quite old by then, but as we were walking in San Jose he suddenly climbed a tree like a young man climbs a staircase.