Pema Chödrön tells the story of when, having hit rock bottom, she asked her teacher what to do. 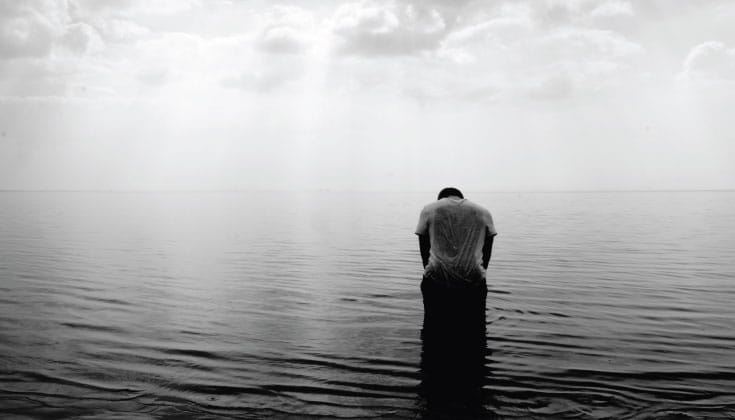 I thought I would tell you this little story about Naropa University’s founder, Chögyam Trungpa Rinpoche, and my very first one-on-one interview with him. This interview occurred during the time when my life was completely falling apart, and I went there because I wanted to talk about the fact that I was feeling like such a failure and so raw.

But when I sat down in front of him, he said, “How is your meditation?”

And then we just started talking, superficial chatter, until he stood up and said, “It was very nice to meet you,” and started walking me to the door. In other words, the interview was over.

And so at that point, realizing the interview was over, I just blurted out my whole story:

My life is over.

I have hit the bottom.

I don’t know what to do.

And here is the advice Trungpa Rinpoche gave me. He said, “Well, it’s a lot like walking into the ocean, and a big wave comes and knocks you over. And you find yourself lying on the bottom with sand in your nose and in your mouth. And you are lying there, and you have a choice. You can either lie there, or you can stand up and start to keep walking out to sea.”

So, basically, you stand up, because the “lying there” choice equals dying.

Metaphorically lying there is what a lot of us choose to do at that point. But you can choose to stand up and start walking, and after a while another big wave comes and knocks you down.

You find yourself at the bottom of the ocean with sand in your nose and sand in your mouth, and again you have the choice to lie there or to stand up and start walking forward.

“So the waves keep coming,” he said. “And you keep cultivating your courage and bravery and sense of humor to relate to this situation of the waves, and you keep getting up and going forward.”

This was his advice to me.

Trungpa then said, “After a while, it will begin to seem to you that the waves are getting smaller and smaller. And they won’t knock you over anymore.”

That is good life advice.

It isn’t that the waves stop coming; it’s that because you train in holding the rawness of vulnerability in your heart, the waves just appear to be getting smaller and smaller, and they don’t knock you over anymore.

“Fail better” means you begin to have the ability to hold what I call “the rawness of vulnerability” in your heart.

So what I’m saying is: fail. Then fail again, and then maybe you start to work with some of the things I’m saying. And when it happens again, when things don’t work out, you fail better. In other words, you are able to work with the feeling of failure instead of shoving it under the rug, blaming it on somebody else, coming up with a negative self-image—all of those futile strategies.

“Fail better” means you begin to have the ability to hold what I call “the rawness of vulnerability” in your heart, and see it as your connection with other human beings and as a part of your humanness. Failing better means when these things happen in your life, they become a source of growth, a source of forward, a source of, “out of that place of rawness you can really communicate genuinely with other people.”

Your best qualities come out of that place because it’s unguarded and you’re not shielding yourself. Failing better means that failure becomes a rich and fertile ground instead of just another slap in the face. That’s why, in the Trungpa Rinpoche story that I shared, the waves that are knocking you down begin to appear smaller and have less and less of an ability to knock you over. And actually maybe it is the same wave, maybe it’s even a bigger wave than the one that hit last year, but it appears to you smaller because of your ability to swim with it or ride the wave.

And it isn’t that failure doesn’t still hurt. I mean, you lose people you love. All kinds of things happen that break your heart, but you can hold failure and loss as part of your human experience and that which connects you with other people.