It’s an expression of oneness — with the Buddha, with the sangha, with the cosmos itself. Mark Unno teaches you how to let go into the flow of chanting. Illustrations by Carole Hénaff. 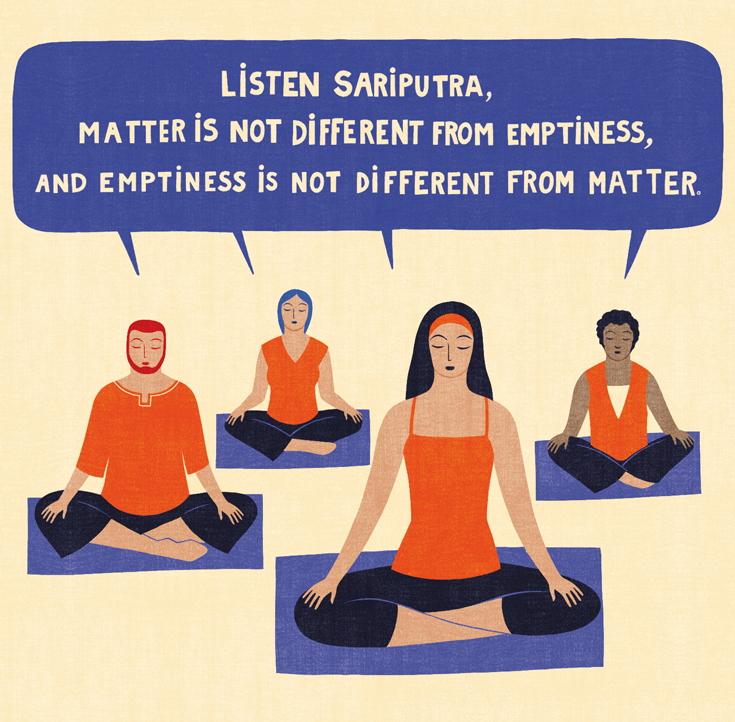 As long as Buddhism has existed, chanting has been one of its core practices. Originally, both recitation and chanting were used as ways to help memorize teachings, as well as expressions of commitment. Many schools of Buddhism today still chant in Pali, the language of the historical Buddha.

In some schools, such as Zen and Theravada, silent, seated meditation is regarded as the most central practice, with chanting seen as preparation for meditation. In other schools, such as Pure Land, chanting is the central practice. In many schools of Mahayana Buddhism, chanting is viewed as coming from the deepest level of reality, the true nature of the self, which is emptiness, oneness, or the formless source of the buddha body, the dharmakaya. Chanting therefore doesn’t come from us deluded sentient beings with dualistic intentions of ego-consciousness, but instead from cosmic buddhas and bodhisattvas such as Mahavairocana or Avalokitesvara, who are subtle manifestations of cosmic oneness and buddhanature.

When we’re fully embodied and mindful in chanting, then many minds become as one mind, and one mind releases into no mind, emptiness, and the great flow of the oneness of reality.

Chanting is neither active nor passive—it’s receptive. We chant so we can receive the spontaneous cosmic power of no-self, emptiness, and oneness. So rather than being the instigator, the chanting practitioner is the recipient of the power of awakening—they are the receptive vessel of the Buddha’s wisdom and compassion. This notion is present in many chants, such as those about entrusting ourselves to the power of cosmic buddhas, like Namo Sakyamuni Buddha, Namu Myoho Renge Kyo, Namu Amida Butsu, which means, “I take refuge in the Buddha Shakyamuni, I take refuge in the Lotus Sutra, I entrust myself to Amida Buddha.”

Chanting involves a great deal of conscious effort for the beginner who’s trying to memorize a chant, learn the right tone and tempo, and—if chanting in a group—blend with the others. But as we deepen in our practice, there’s gradually less conscious effort and a greater sense of letting go into the flow of chanting. This is often accompanied by a shift in the physical center of chanting, as we feel it move from the throat to the heart to deep in the abdomen and, ultimately, into buddhanature, the deep flow of the oneness of reality.

Although Buddhist chanting can have a melody, overall, it’s more monotonic, as Buddhist contemplative practices are based in equanimity and repose. This is often in contrast with other religious traditions—in Christianity, for example, there’s more singing than chanting, and even Gregorian chants are more melodic than much of Buddhist chanting. Christian melodies and chants are meant to convey the feeling of transcendence into heaven or the spirit rising in devotion to the divine. In contrast, Buddhist chanting conveys a deepening awareness of nirvana or cosmic oneness. But even though in Buddhism the emphasis is on equanimity, repose, and the contemplative flow of chanting, there’s also deep joy that arises from the feeling of release from the bonds of attachment and suffering and of the great compassion realized in interdependence with all beings.

If you chant as part of a sangha, in time you’ll find that your voice more easily blends with the voices of others. Yet, in blending with others, we do not erase our individuality. Rather, our individuality enriches the sound of group chanting and, indeed, the chorus is greater than the sum of its parts. Each of our voices carries the imprint of our personality and experiences. No-self or emptiness is inseparable from the multifarious manifestations of form.

Because our existence is impermanent, and each moment is precious, we should devote our entire being to each opportunity to chant and to each and every syllable. When we’re fully embodied and mindful in chanting, then many minds become as one mind, and one mind releases into no mind, emptiness, and the great flow of the oneness of reality. Ultimately, whether we’re physically in a group or alone, each time we chant, all beings—everywhere, past, present, and future—blend, dissolve, and become as one with us in the great journey of boundless compassion. 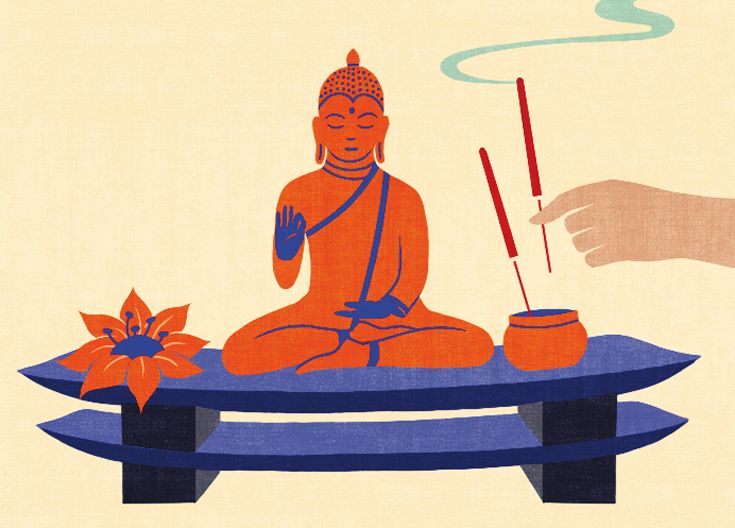 Select a chant such as the Heart Sutra, either in an Asian scriptural language or in English translation. You might find an online recording to see what it sounds like in any given tradition. Find or create a contemplative space with an altar containing a statue, image, or scroll. Light incense (optional), and if available, place a chanting bell next to your meditation cushion or seat, arranged to face the altar. 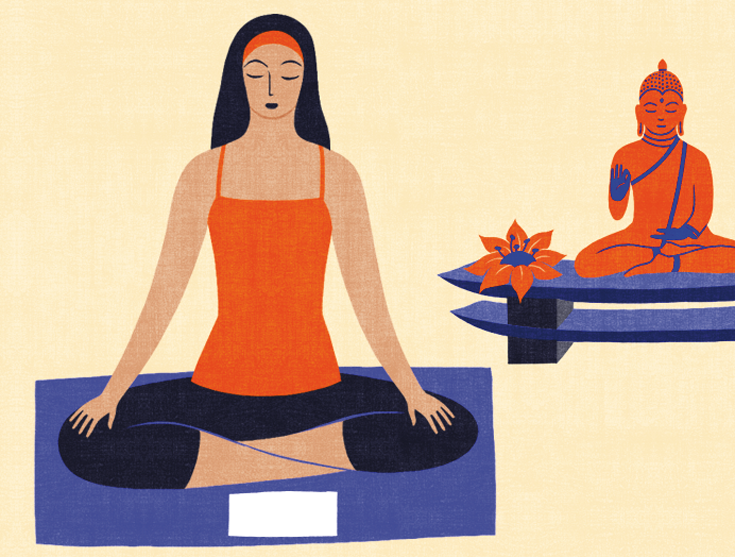 Briefly prepare body-mind with a moment of seated, silent meditation. Bow to conclude the meditation, and pick up the chant with both hands. It can help to have the chant on a stiff card if you don’t have a book. Lift the chant above your head and bow lightly. Begin chanting by ringing the bell, relaxing into it. 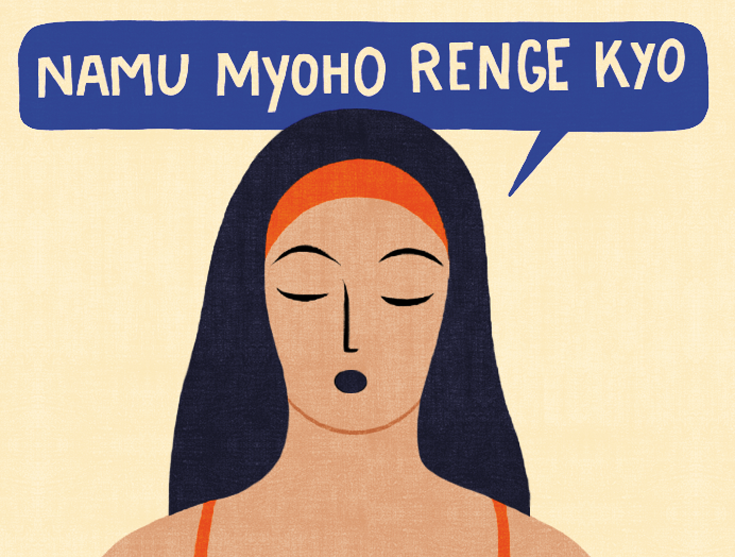 The power of chanting arises from deep within, as you let go of the dualistic mind’s desire to control reality. So, allow the chant to unfold. Focus more on the continuous sound of the chant rather than on the meaning of the words. Over time, as you deepen your chanting and enter into the flow of oneness beyond words, the meaning will become apparent naturally. To finish, lift the chant card, book, or paper above your head and bow lightly. Ring the bell and bow again.