It took an illness of the brain for Meg Hutchinson to discover the inherent sanity of her own mind. Her breakdown was actually a breakthrough. 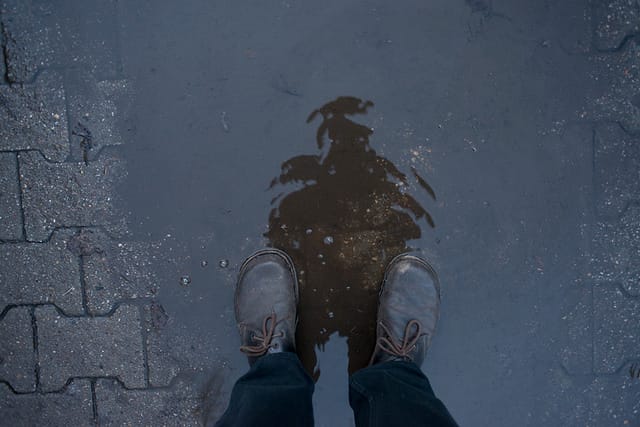 I was twenty-eight years old when my life fell apart. I had been quietly struggling with depression since I was nineteen, but increasingly the lows were followed by periods of ecstatic exuberance and boundless energy. What I had always written off as an “artistic temperament” was starting to become an exhausting ride.

Earlier that spring, I’d been selected to participate in a whirlwind musical tour of the U.K., performing with several other bands. We drank too much and slept too little, and it all felt easy to me. I was quick to laugh, suddenly extroverted, filled with creative energy. But when I returned to Boston, I quickly spiraled downward.

I began having trouble sleeping, even for an hour. I got lost driving in my own neighborhood. My reflexes slowed down and I had trouble playing the guitar. When I tried to pack for a trip to Minnesota, I found it difficult to make decisions. My brain could no longer handle even simple tasks. How many clothes would I need for a two-week trip? How did that knob on the washing machine work? What season was it?

As I felt the fog closing in on my life, bewilderment turned to fear. My brain was racing in tight circles of anxiety, but try as I might, I couldn’t untangle my thoughts. I felt as though I was rapidly developing Alzheimer’s.

I was experiencing what I later learned is called a “mixed state,” in which someone with bipolar disorder is suffering mania and depression simultaneously. After five days of total insomnia, I called my family. It took tremendous courage to say, “Mom, there is something chemically wrong with me. I’m coming home.”

My parents are former hippies. My sisters and I went to an alternative school and were raised on homeopathy and co-op foods. In my family, if you’re feeling “blue” you eat a little more kale, go on another hike, or write a poem. But I was no longer in control of my brain function; none of the things that had helped me with depression in the past were having any effect.

It took all of my focus to drive those two and a half hours home to the Berkshires. The Mass Turnpike was still relatively empty as the sun began to rise. Looking at the colorful morning sky, I realized I wasn’t responding to beauty. It was like the channel through which I perceived life had turned a muted gray.

People who have never experienced severe depression often imagine it to be an extreme sadness. Those of us who have lived with it know that it’s beyond that. It is a profound dullness, and it manifests in the physical body as tangibly as any major illness.

As I drove that morning, I had lines from Theodore Roethke’s poem “In a Dark Time” stuck on repeat in my head. They were lines I had painted on my bedroom wall as a teenager:

In a dark time, the eye begins to see,
I meet my shadow in the deepening shade…
What’s madness but nobility of soul
At odds with circumstance?

Those words seem like foreshadowing to me now. I felt myself sinking down into the deeper recesses of my subconscious mind, wondering what I might find lurking there. I focused on the word “nobility.” I thought, let me handle this absolute confusion with some kind of nobility.

I pulled the car into my mom’s driveway and walked up the path to the house I was born in. “I have never seen you look this way,” my mom said. I saw the first wave of fear cross her face. As a child, I was so happy and calm that Mom used to call me “Buddha baby.” I’d always been emotionally self-sufficient, and my response to adversity had been to work harder and stoically wait it out.

Yet now I couldn’t solve my problems on my own, and it was beyond the abilities of my family too. For several days my sisters tried everything—salt baths, warm food, massage, slow walks, sleeping medication, valerian root, therapy—but finally we agreed it was time for the hospital. Fortunately my younger sister was studying for her master’s in social work and was able to educate all of us about psychiatric illness and advocate fiercely for me.

I checked myself into the psychiatric inpatient unit at Berkshire Medical Center, where I was diagnosed with bipolar disorder and stayed for twenty-one days. I fought to stay alive with my whole being while the illness ravaged my brain and made me desperate to escape my body. That is where this story really begins.

Because my brain was so compromised, I had a tremendous opportunity: I had the chance to see what remained. I didn’t have words for it yet, but what remained was a deep thread of consciousness connecting me to something at my core. A breakdown, I came to find out, is actually a kind of accelerated spiritual lesson. So much is accomplished so rapidly when the brain undergoes a terrific malfunction. One’s entire identity is shattered.

I was suddenly stripped of everything I had ever counted as my “self.” I was wearing a combination of my sister’s clothes and hospital pajamas. I was sharing a desolate room with a total stranger. I wasn’t allowed many personal possessions, and none of the food resembled anything I normally ate. I couldn’t concentrate long enough to read even a paragraph, and when I looked in the mirror, my eyes were so dark and my face so thin that I didn’t recognize my reflection. None of the ways I’d defined myself in the world had any bearing.

On a psych unit, no one cares if you were a straight-A student, if you were a three-season varsity athlete, if you were popular or successful. Your personal narrative is useless in there. In fact, I experienced a strong allergic reaction to my own ego. I was overwhelmed with memories of my arrogance and competitiveness and felt a strong regret for all the ways in which I had judged others.

Reality is totally up for grabs on an inpatient unit. When I said, “I’m a folk musician and I was on tour in Europe,” I got the same impartial stare from the social worker in group therapy as the guy next to me received when he claimed there was a devil living in his neighbor’s garage.

I had none of the tools left with which I’d always oriented myself in the world. Instead, I discovered a deep knowing that was a witness to my experience and guided me even when my brain was failing. What remained was a quiet gentleness, a belief in something larger and greater than the excruciating emotional pain at hand. It was this deeply ingrained instinct, however faint, that kept me safe from even myself. I did not lose my mind that summer. I found it.

It took six weeks for me to sleep long enough to dream again. The first night I did, I dreamed I was walking up a steep mountain road with hundreds of fellow refugees. The earth was gray and dark, but we were all dressed in bright colors and carried our few belongings on our backs. The dream was vivid, and I woke the next morning with a strong sense of hope.

The second night I dreamed that I was walking along a forest path. The trees were tall and green all around me. I began to run faster and faster, leaping higher and higher until I lifted right off and flew.

Slowly, each day, the world returned to me. My sister took me whale watching off the coast of Provincetown. We had been on many whale watches in our lives, but this one was extraordinary. Three whales came right up to the side of the boat and began to breach and splash backward into the water. They danced and played, staying beside us for a long time.

I stood at the rail, holding my sister’s arm, laughing and laughing with her in the salt air. As the sun went down, the sky turned the most amazing purple and gold, and I felt the beauty reach me. I thought about that Roethke poem again: In a dark time, the eye begins to see. I was seeing the world in a way I never had before.

This is not a miracle story. I survived because I got help. My brain stabilized because I already had a solid foundation of health and a good support network, I took medication diligently, went to therapy, and changed my lifestyle. I healed because I walked through that door the illness opened for me.

I no longer think of that summer as my “breakdown” but as the year of my “breakthrough.” At age twenty-eight, I was given a wake-up call, which will inform the rest of my life. I was given a profound teaching on the truth of suffering, on the nature of reality, and on the preciousness of human life. Without that pain, I may not have woken up until I was a very old woman. Or not at all.

I have always had an interest in Buddhism, yet it was my experience that summer that prepared me to meet my teacher and take refuge. For many years I’d been walking past a Buddhist monk on a path near my house. I’d always felt a strong connection to him but hadn’t felt bold enough to say hello. After returning to Boston, a friend invited me to dinner with a Tibetan lama. It turned out to be that same monk I’d been walking past all those years. I was ready now to become a student.

In these seven years of recovery, I have found a middle way between Buddhism and Western medicine. In order for me to practice meditation, I’ve finally accepted that medication must play a role in keeping my brain healthy. But it’s the spiritual work that has allowed me the most profound healing, both physically and emotionally.

I think we’ve made a grave mistake in calling psychiatric illnesses “mental illness.” This implies that at our core, we are essentially diseased. Many illnesses of the brain are severe enough to cloud our mental consciousness, but my experience confirmed for me that the mind and brain are not the same thing.

It took an illness of the brain for me to discover the inherent sanity of my own mind. Now I meditate every day to strengthen that clarity. I meditate to give it more and more space in my life, to ensure that this inner witness is even stronger the next time I have to go through something difficult. Having lived through a small death, I recognize the importance of practicing for the bigger death of this physical body.

There is no greater incentive in recovery than the realization that we have always been well. We come into the world with the “nobility of soul” that Roethke talks about. No matter what the circumstances are, that purity remains and we can find our way back to it. Illness can break our hearts, but it can also break our hearts open.