Inward Bound Mindfulness Education (iBme) held their first Teens of Color in-person retreat in 2019. Now, they’ve made the switch to online programming in response to the Covid-19 pandemic. In doing so, they’ve made the experience even more accessible and connected. Sandra Hannebohm reports. 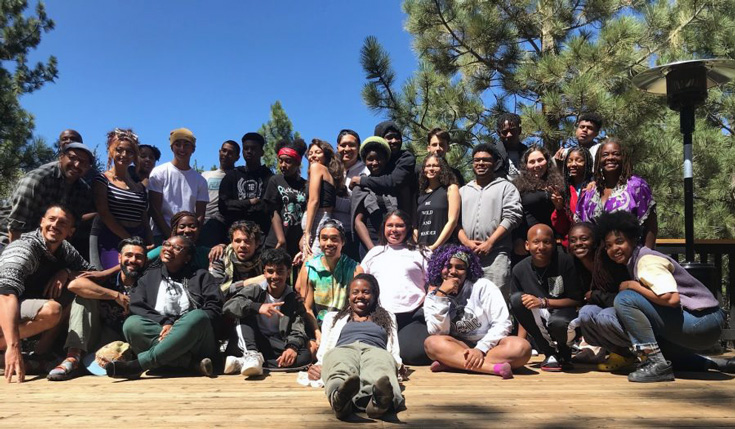 Inward Bound Mindfulness Education (iBme), a non-profit organization dedicated to teaching young people mindfulness, quickly pivoted from in-person retreats to virtual programs amidst the Covid-19 pandemic. The organization has held in-person mindfulness retreats for teens and young adults across North America and the U.K. since 2010. In 2019, the organization began to hold retreats for POC youth with their Teens of Color Retreat. On their first retreat, community of young POC met on retreat in California at Big Bear Retreat Center. The participants just seemed to “gel,” says iBme Communities of Color Program Manager, Jylani Brown.

“The feedback was so incredible from the youth and families, saying that we have to do this again,” said Brown. iBme immediately began planning two more retreats, one on each coast.

When the pandemic hit, the planning team realized summer 2020 wouldn’t go as expected. In March, the facilities they had booked were temporarily locked down. Within four weeks, Brown said, they had to transform the in-person programming to online virtual workshops. “We really didn’t know what [an online version] would look like,” she said.

This pandemic has taught us that we have to stay in touch with each other.

The traditional in-person retreat often requires participants to take on high expenses for travel and living. For iBme’s previous Teens of Color Retreat, several participants flew in from out of state. The results of different communities coming together were deeply transformative — not just for the teens, but for the communities they live in and the facilitators themselves.

Charisse Minerva Spencer, a teacher and mentor at iBme, said the power of the in-person retreat is immeasurable. “They become aware of their interactions with the broader community, they become way more aware of their relationship with nature, and those are the areas where society is coming up short right now.”

Great effort is made to make sure the programs are both relevant to youth and purposely adaptive to the needs of teens, she added. “They bring a particular need to be heard and most of all, they bring a particular wisdom to the table … What I’ve found in the communities that I serve, in order to get them engaged with the idea of meditation, I have to share it in ways that are culturally specific to them.”

“If you take out the sense of just the formal sit, there are other ways that people contemplate: drumming, storytelling, singing, dancing, walking. Those are universal,” Spencer said.

“So using those universals and juxtapositioning them with this formal type of sitting-on-the-pillow meditation, it allows them to explore and deepen.”

For example, Spencer described a musical chairs-like game where the participants practiced breathing and walking meditation while listening to “Walk it Like I Talk It,” by Migos featuring Drake. When the facilitator presses pause, everyone stops for a meditative breath. Then the music, the walking, and the dancing begin again.

As their self-awareness grows on retreat, the next challenge is taking it into their lives at home. “They can go back in their communities and they can be the sparks that produce change,” says Spencer. But it’s not always easy to then integrate the practices learned on retreat into daily life at home or in the community.

That gap between “retreat life” and daily life is one that the virtual retreat seems to naturally bridge.

The four-week virtual program was designed so participants ages 15 and up could drop-in via Zoom on any given workshop, and those ages 15-25 could join a four-day virtual retreat at the end of the four-week period. Themes were chosen for each workshop, including a cooking theme that involved sending ingredients to participants’ doors so they could virtually cook and eat together.

iBme provided copies of Buddhist teacher Lama Rod Owens’ latest book, Love and Rage: The Path of Liberation Through Anger, and invited him to give a presentation. There was early morning yoga that also saw impressive engagement from the teens, said Brown. “When you’re asking young people to show up at 7:15 AM to do yoga and they show up, and it’s optional? Come on now.”

Of the 28 teens that registered, everyone engaged in the material from home, and the majority attended more than one workshop, meaning they stuck around for all or most of the program. Toward the end, they had more people participating than had initially registered for the workshops.

We’re able to reach people in communities more easily with our online programming.

Sarah Wrean, a program manager at iBme says in-person and virtual retreats are kind of like apples and oranges: hard to compare. “But the beautiful thing about an online retreat and online programming, in general, is that we’re not taking people out of the environments that they’re normally in. We’re really hoping to increase capacity to be with what is in your living space,” she says. “How can you work that in?”

“Actually in some ways, we’re able to reach people in communities more easily with our online programming,” said Wrean.

The virtual program is more accessible than ever, with scholarships for low-income families and access to resources and teachers online. Participants are engaging in new ways that relate directly to their daily lives.

In any given youth workshop, family members or friends are welcome to join participants in the group, so in reality participants ranged from six years old to 90. “What we’ve been seeing is that folks are asking, ‘Hey, my family member’s in the other room, can they come participate too?’ which feels so special.”

In the past, she says, “It’s really been a separation if you come on a retreat. You’re without your family for six days, you’re really immersed, and then there’s a real re-entry that has to happen for folks. But since everyone’s home and since all this has been happening online, we’re actually able to integrate a lot more easily.”

Despite the world-changing events of the pandemic, the 2020 Teens of Color programs were the most successful events of the summer at iBme, and more online programs are in store as the network of participants grows. The organization says they will continue to offer online programs even when in-person retreats become possible in the future.

“We have to do it, because in-person retreats are limited to time and space,” said Brown.

“If nothing else, this pandemic has taught us that we have to stay in touch with each other.”