Aaron Lee, author of the blog “Angry Asian Buddhist,” passed away at the end of October at the age of 34 after fighting cancer for over a year. Chenxing Han reflects on the meaningful impact Lee made on the Buddhist community, and the many refuges he created for Asian American Buddhists. 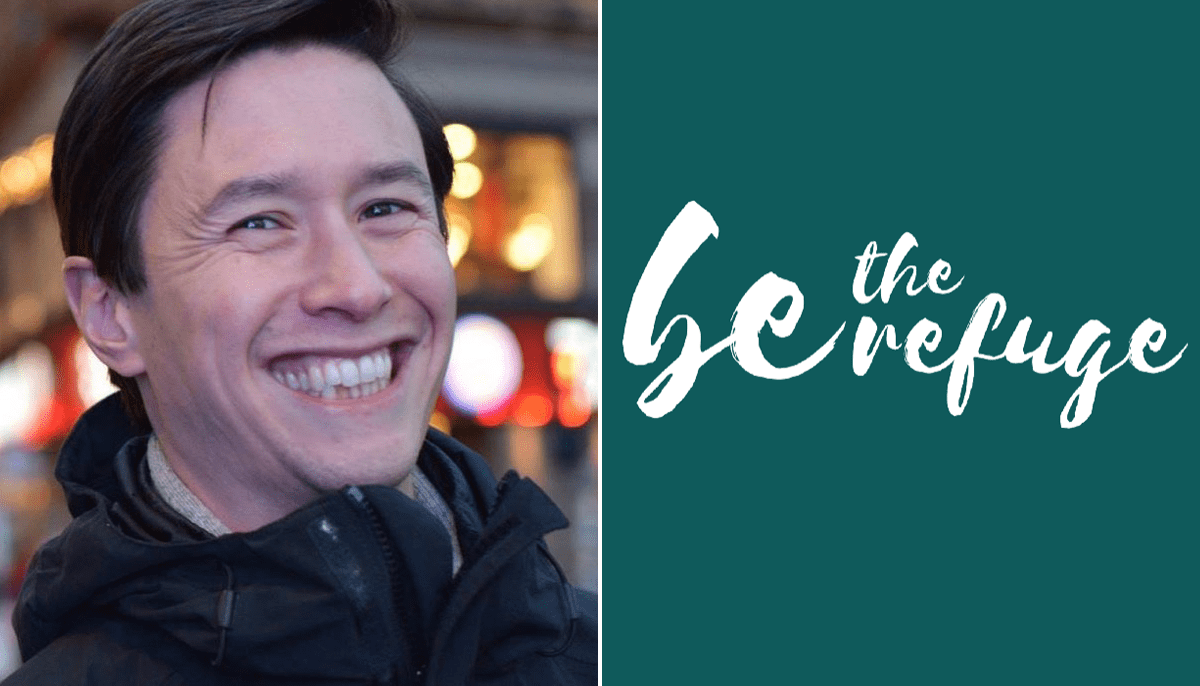 Aaron Lee (left) and his “Be the Refuge” logo (right). Photo of Lee via Facebook.

The first words that Aaron Lee wrote to me were, “Any project about young Asian American Buddhists sounds amazing, so I will be happy to support in any way I can.” Having known him up to that point only as “Arun,” the pseudonymous author of the blog “Angry Asian Buddhist,” I wasn’t sure what — or whom — to expect when my master’s thesis advisor introduced us over email.

I knew from perusing Aaron’s blog posts on Angry Asian Buddhist that he was male, but other identifying details remained a mystery. Despite his impassioned articles on issues of race in American Buddhism, Aaron’s ethnicity was ambiguous. Based on the languages he knew, the schools of Buddhism he was familiar with, and the Buddhist news he shared, I presumed that he could be Thai, Cambodian, Vietnamese, Japanese, Burmese, or Bangladeshi. Geographically, he was also hard to pin down. Among other places, his blog revealed connections to the Bay Area, Southern California, Paris, and rural Illinois. Even his Buddhist affiliation was not entirely clear. He mentioned an affinity for Theravada Buddhism, but also wrote about visits to Mahayana Buddhist communities.

He was full of warmth and wit. His humor, generosity, curiosity, optimism, and enthusiasm were infectious.

Shortly after that first email, I learned that Aaron was Chinese (specifically, Toishanese) and Polish-Russian Ashkenazi Jewish. He grew up in the Bay Area and Illinois but was living in Southern California, and had strong connections to multiple forms of Buddhism. After he helped connect me with dozens of Buddhist individuals and organizations for my research project, I wondered if the thought that “Aaron knows all Buddhists” might not be too far-fetched. He once told me the story of how, over the course of a cab ride, he discovered he knew one of his driver’s relatives, a Bangladeshi Buddhist.

Over the next five years, until his too-soon death from lymphoma at the age of 34 in October, I had the honor of getting to know Aaron, the person, in conjunction with the “Angry Asian Buddhist,” the persona. In a 2012 interview with Tricycle, Aaron made it clear that the two should not be conflated. Writing under a pseudonym, he said, made it possible for him to be any Asian American — or anyone advocating for the visibility and engagement of Asian American Buddhists, regardless of their gender, ethnicity, or nationality.

As the “Angry Asian Buddhist,” Aaron would sometimes employ a strident and sarcastic tone. As a person, he was full of warmth and wit. His humor, generosity, curiosity, optimism, and enthusiasm were infectious. When we first met in person, he had driven to the Bay Area to attend TechnoBuddha, a conference for young adult Buddhists sponsored by the Buddhist Churches of America. Despite being strapped for time and sleep-deprived as a first-year MBA student, Aaron spent hours completing an interview with me. The recording of our conversation is brimming with his signature stories and often punctuated by laughter.

Later that same year, I traveled to Southern California to conduct more interviews. Aaron somehow found the time to give me a tour of several sanghas, including a meditation group where he was better known by his Vietnamese name, Phu, and a Mahayana temple whose youth group he had supported over the years. He introduced me to various Buddhist friends, Asian American and otherwise, made espresso cookies, and treated me to numerous vegetarian meals. I returned to the Bay Area thoroughly inspired by our conversations, overly caffeinated from his cookies, and happily armed with his advice on how to compactly store plastic bags that I use to this day — folded like a paper football.

His writings are, in my view, love letters — sometimes tough ones — to the American Buddhist community.

I read through more than eight years of Aaron’s blog posts while developing a book manuscript from my research on young adult Asian American Buddhists. What struck me most while tracing the evolution of Aaron’s writing was that he did not consider himself the final authority of the issues he wrote about. Instead, he fervently grappled with the ideas he was exploring, consulting others both online and offline to check his own biases. He willingly admitted his mistakes and apologized for miscommunications. Far from being the rantings of a misanthrope, his writings are, in my view, love letters — sometimes tough ones — to the American Buddhist community from someone who sincerely studied and shared the dharma, and who wholeheartedly wanted to build more inclusive sanghas. I see his blog posts as a skillful means to combat the marginalization of, raise awareness about, and encourage participation from Asian American Buddhists.

In recent years, Aaron’s posts were infrequent as other priorities took precedence. After his cancer diagnosis in 2016, Aaron shared with me his motivation for a new blog, which he would call “Be the Refuge”:

“Be the Refuge” is something that I’ve thought about a lot since my diagnosis. When I was in pain, I used meditation as a refuge for my mind. In the hospital, I used my speech and actions as refuge for my family and caregivers—providing them with a space where they could feel calm, positive and helpful. In organizing marrow drives, I try to create a refuge for my friends from the powerlessness of being able to “do nothing”— a space where they feel empowered to provide meaningful assistance toward finding my cure.

Even though Aaron was able to beat the odds and find a match for a bone marrow transplant, the transplant and other grueling treatments he undertook ultimately did not cure him. Yet, even as his prognosis turned for the worse, Aaron was remarkably sanguine. Even if he were to die, he said, he hoped his efforts to encourage more people to sign up for the bone marrow registry — especially other mixed-race individuals — would save many lives.

At his memorial, many of us remarked how Aaron felt like an ongoing presence in our lives, urging each of us to create multiple refuges for and with each other.

Aaron once expressed that he was unsure whether he could ever align Angry Asian Buddhist with Be the Refuge. “Maybe one day…,” he mused, though multiple interviewees have told me about the sense of relief, recognition, and belonging they’ve felt while reading Aaron’s writing on Angry Asian Buddhist. It seems his blog was a refuge all along.

At his memorial, held at Hsi Lai Temple, many of us remarked how Aaron felt like an ongoing presence in our lives, urging each of us to create multiple refuges of solidarity, community, and coalition, for and with each other.

That sunny afternoon, we joined voices in a chant as each of us carried a flower to the altar. With hands clasped in prayer, we raised it to our foreheads and bowed in respect. I knew the seemingly endless procession of people overflowing out of the memorial pagoda was just a small fraction of the lives that Aaron touched.

I watched as the enormous offering bowl, at first lightly sprinkled with buds, transformed into a mountain of multi-colored carnations. A photo of a beaming Aaron sat on the altar. It seemed as if he was saying to all of us, as he once wrote to me: “Whenever you may feel your energy flagging, know that somewhere I am quietly yet furiously cheering you on with a big smile.”