“Creating Joy In Community,” the first residential retreat for transgender people, welcomes members of the transgender, gender nonconforming, genderqueer, and non-binary community to join together and cultivate “trans joy.” 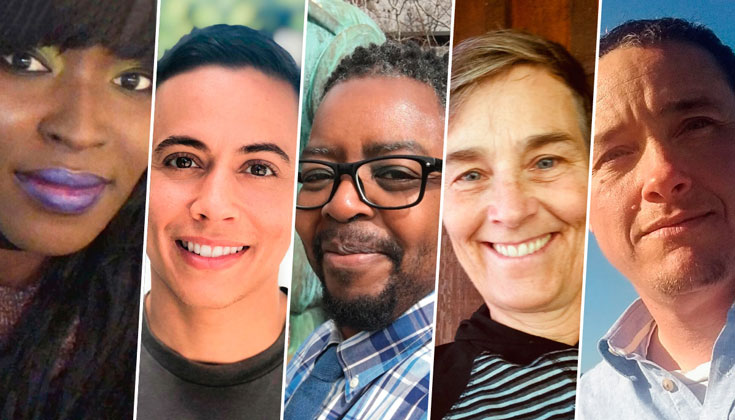 InsightLA will hold the first residential Buddhist retreat for the transgender community in the Insight Meditation tradition at Big Bear Retreat Center in California from September 12-16, 2019.

The retreat, “Creating Joy in Community,” will welcome members of the transgender, gender nonconforming, genderqueer, and non-binary community to gather for silent meditation, mindful movement, and heart-centered practices alongside dharma talks, discussion, and community building.

“Creating Joy in Community” features four teachers: Fresh “Lev” White and René Rivera, who are both trans men; Riya Christie, a trans woman; and JD Doyle, who is genderqueer. InsightLA’s Director of Programming, Martin Vitorino, a trans man, will serve as the retreat’s manager.

Vitorino, a graduate of InsightLA’s Facilitator Training, leads guided meditations at InsightLA East Hollywood and facilitates a monthly event called “Mindful Transitions for the Transgender Community.” He recognized the need and longing for a residential retreat experience specifically for the trans* community (the event organizers use “trans*” to refer to transgender, gender nonconforming, genderqueer, and nonbinary people). White, Rivera, and Doyle have each previously offered daylong programs for trans* people at Spirit Rock and East Bay Meditation Center (EBMC), and other events for the trans* community in the Bay Area, but residential retreats have previously only been held for the larger LGBT community.

“I’ve felt comfortable enough in those LGBT spaces,” says Rivera, a community teacher at EBMC, “but at the same time I have almost always been the only gender nonconforming or trans-identified person on the residential retreat.”

“I just feel so strongly about giving people who don’t fit neatly into the binary gender identities a space where they can be in retreat and feel like they’re totally welcomed and able to come as their whole selves,” he says.

Vitorino has also experienced being the only trans-identified person on retreat and says it creates a barrier to truly going deep and fully benefiting from the residential experience, partially due to the most often gendered retreat housing and bathrooms, where practitioners are separated into “male” and “female” categories.

“If I ask to be in a male dorm, and my roommate is a cisgender man who doesn’t know I’m trans, and we don’t get to talk about that, I don’t get to check in and see if he’s a safe person,” says Vitorino.

“The nature of sharing a room and a bathroom is that your bodies are exposed on some level in a way that feels really vulnerable. When I’ve had cisgender male roommates I’ve always been self-conscious, thinking ‘OK when I go to the shower, I have to make sure I have my clothes ready, because I have to be able to hide my body in a certain way so that I’m not outed,” he says.

“I think that that’s an unnecessary concern that trans people and gender nonconforming people have to deal with when they just want to come practice and be with themselves.”

Doyle, a Core Teacher at EBMC and current participant in Spirit Rock’s teacher-training program, notes that there’s been an active movement towards welcoming trans* people into Buddhist spaces with some centers being more mindful of pronouns, or offering trans* affinity groups; but, they say, things still aren’t where they should be.

“I’ve continued to be in spaces where it’s assumed that everybody is in the gender binary, and where the bathrooms aren’t available unless you’re are choosing to be in that gender binary,” they said.

“As I step into roles as a retreat teacher in my training, I want to be out there letting people know that this is a community that wants the dharma, loves the dharma, and is excited about it.”

Big Bear Retreat Center’s founder, Bill Resnick, offered the space as a container for the retreat.

“He said ‘Martin figure out a way that we can have a retreat for trans people here and we’ll make it happen.” He was already really generous in that offering’” says Vitorino.

The idea of being in the majority feels exciting.”
—Martin Vitorino

At this retreat, participants will choose whether they prefer to be in a male, female, or non-binary/non-exclusionary dorm.

Everyone at the retreat, save for perhaps a groundskeeper, will be a member of the trans* community, says Vitorino, including the retreat’s chef, EJ Truelove. This will be a “stark difference” for participants who are used to being the only trans* person on retreat.

“The idea of being in the majority feels exciting. I hope that people feel that they can let their guard down on some level, and feel that little bit safer to just be who they are without the added thoughts, considerations, insecurities, and fears that can come up when you’re the only one,” he says.

“Creating Joy In Community,” will be offered on a sliding scale based on financial need, and the group says no one will be turned away for lack of funds. The retreat is still seeking allies to help support scholarships and funding for the retreat, whether it be a financial donation to cover meals for a participant, or coverage of the full experience. They want to make the retreat as accessible as possible for people across the financial needs spectrum.

“Trans people in general have a lot of issues with unemployment for various reasons — whether it’s because you’re suddenly in a role that you weren’t in before, or maybe because you’re appearing different so jobs are hard to find,” says White, a graduate of Spirit Rock’s Community Dharma Leadership Program, and the founder of the Bay Area’s first trans* and genderqueer mindfulness sangha.

With three of the four teachers being people of color, the group hopes to be able to reach out to and have a balance — or even a majority — of trans* practitioners of color and “speak to the lack of racial inclusion in the dharma world,” particularly for trans women of color.

Though Riya Christie is not a Buddhist teacher, she brings a wealth of experience from her life of working with LGBT and POC communities. As a trans woman of color Christie’s presence is important, says White. “There are so many trans women and trans women of color who have not felt comfortable in Buddhist places or meditation spaces,” he says.

“It’s hard to find a leader who, even if she’s out there, easily available… Riya’s skill with working with people of color, and the way that she’s simply mindful and intelligent, is why we invited her in,” he says.

“It’s my intention to provide a space for people even if they’ve only practiced a little. We want to have everybody feel seen and heard, and gain the benefits of the practice.”

In the “Creating Joy In Community” retreat description, it’s noted that trans* people “demonstrate enormous resilience in spite of systemic barriers to their well-being,” as they deal with “day-to-day harms and the legacies of injustice.”

As White puts it, living in a trans* body involves “walking through a field of microaggressions throughout the whole day,” and this retreat aims to offer a space grounded in kindness and compassion to support healing from these past and present harms. The retreat will focus on joy and incorporate practices like metta (loving-kindness) to nurture connection and resilience.

“Metta practice and the heart practices have completely transformed my life and been a crucial tool in my survival toolbox,” says Rivera.

“Particularly at this time when trans folks are being erased and attacked at a national level, bringing people together to cultivate loving-kindness, compassion, and joy feels the best thing I can offer to my community… We can spark joy through our connection to each other. Part of how we survive and thrive as trans people right now is to cultivate our trans joy,” he says.

Going forward, the group hopes to continue this retreat as an annual event.

On this particular retreat, predicts Vitorino, the element of joy will come naturally. “When you create a space solely for trans people, there is a natural welling up of joy that arises from a sense of belonging,” he says.

“When everyone belongs, it can do wonders, at least for me personally. I don’t have to feel like there’s something wrong with me, or constantly compare myself to cisgender people. Creating this space is creating the conditions for joy to naturally arise, and in that way I feel like it’s very healing for the heart.”