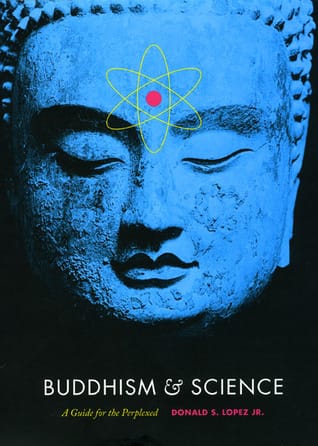 Donald Lopez is an attentive historian who takes pleasure in detailed, thick descriptions of Buddhist tradition. In previous books, he has taken us through the remarkable writings of Gendun Chopel, the early twentieth-century Tibetan monk; the dense and opulent visualizations of Vajrayogini meditation; and the cast of European characters whose scholarship and visions laid the foundations for our current knowledge of Buddhism in the West. The caliber of Lopez’s historical sense is beyond question.

What Lopez’s historical sensibility brings to Buddhism and Science: A Guide for the Perplexed cannot really be discerned until one has given the book a thorough read, because the range of topics discussed under the rubric of “Buddhism and science” is much broader than the reader might expect. The scope of Lopez’s investigations suggests that he is not so interested in the dialogue between Buddhism and science but in another, and perhaps larger, question altogether. The book’s subtitle, A Guide for the Perplexed, provides a clue. An alternative subtitle of The Perplexity of Buddhism’s Identity would be much more to the point.

The introductory chapter provides a history of the claim that Buddhism is scientific—or at least compatible with science—as advanced by Asian spokesmen such as Gunananda and Dharmapala of Sri Lanka, Yang Wenhui and Taixu of China, Shaku Soen and D. T. Suzuki of Japan, and Gendun Chopel and the present Dalai Lama of Tibet. Lopez observes that all these men were Buddhist apologists who either fought against the condescension of the West or the modernist enthusiasms of their fellow nationals. These apologists, says Lopez, claimed that Buddhism was “the scientific religion, the religion best suited for modernity, throughout the world,” and they pointed out that “It was an Asian, the Buddha, who knew millennia ago what the European was just beginning to discover.” The suggestion was that if Asians had science all along (because of their scientific religion), then surely Asian nations were intrinsically modern and therefore should be afforded greater political standing in the world. According to Lopez, the “inevitable link” between nation (or nationalism) and science is visible even in the current Dalai Lama, who presents Tibetan Buddhism “as a worthy interlocutor of science and hence an appropriate ideology of a modern nation that might one day exist.”

The perplexity of Buddhism’s identity is evident here. Lopez at first seems to be wary of the “Buddhism” constructed in the Buddhism-and-science discourse because of its seeming rhetorical purpose. “Scientific Buddhism” is a “weapon,” in his choice of words, which was wielded in self-defense against the West. What Lopez objects to is everything that this stripped-down, demythologized, and rational Buddhism gives up in order to become the favored child of Western prejudices. This becomes clear in the first chapter (“First There Is a Mountain”), where Lopez recounts how the traditional, flat-Earth cosmology of Buddhism has become one of the first casualties of this association. Gendun Chopel chastised Tibetans for clinging to traditional cosmology when there was a wealth of empirical evidence that the Earth is round. The Dalai Lama states simply that the Buddha was wrong about the shape of the Earth—but no matter, for this is inconsequential to the Buddha’s central program. “The question then,” Lopez responds, “is which Buddhist doctrines can be eliminated while allowing Buddhism to remain Buddhism.” Lopez rues the loss of Buddhist cosmology, with its Mount Meru rising loftily at the center, whereas the Dalai Lama does not. For Lopez, the sacrifice of this mountain is a “slippery slope.”

Lopez’s construction of “science” in the remaining chapters captures a rather quirky series of entities. In “Buddhism and the Science of Race,” Lopez takes up the Indo-European thesis that links the Aryans of India with Europeans, and the way European race mythology benefited from the scientific burnish lent by the linguistic research behind the Indo-European thesis. What does this have to do with the discourse on scientific Buddhism? It seems that Buddhist apologists like Dharmapala were wont to supplement claims of the superior nature of Buddhism with appeals to the Aryan heritage of the Buddha and his teachings. Dharmapala used the rhetoric of race and Aryanism, which, as Lopez admits, was another “gift” of Western colonialism, to argue the case for Buddhism. The huge impact of Western imperialism in Asia and the way it gave rise to race consciousness is evident here.

What is unclear is whether Lopez believes the conjunction between “scientific Buddhism” and the “science of race” is accidental or organic. Beyond the overlap in place and time, the only other obvious link is the reference to science. Lopez is uncharacteristically vague about his history here. He begins the chapter by discussing the widespread reputation of the Buddha as one who rebelled against the caste system, defying the authority of the Brahmins and allowing low-caste members into his community. Lopez concludes by invoking a relatively obscure seventh-century Indian Buddhist philosopher whose commentary on a commentary to Nagarjuna’s Madhyamakashastra states that the Buddha’s dharma should not be taught to low-caste people. Based on this example, Lopez asks if the twentieth-century Dharmapala was not giving voice to “something that had been there all along.” Is this “something” a caste version of “scientific” racism within Buddhism? Is the point that “scientific Buddhism” accesses Buddhism’s darker side? The upshot is unclear, and the tacit paralleling of the nineteenth-century European “science of race” with the Indian caste system needs justification.

Chapter 3 (“Two Tibetans”) contains Lopez’s rich exposition of Gendun Chopel, and, to a lesser extent, the Dalai Lama, as two twentieth-century Tibetans who have actively responded to Western modernity and science. This is where Lopez’s consideration of the Buddhism-and-science conjunction is most on target. The exposition of these two thoughtful figures augments the political interpretation that Lopez offers in his introductory chapter. Gendun Chopel considered Western science, which he encountered during his travels in India between 1934 and 1946, in light of the instincts provided by his Buddhist training, and it is a fascinating thing to behold. The Dalai Lama proves to be more resilient in his Buddhist identity than suggested in the first chapter; he’s not quite willing to give the whole raft of Buddhist doctrines away in order to become endeared to science. The nuanced characterization of these two figures offers a wealth of historical perspective that is relevant to current conversations about Buddhism and science.

The next chapter (“The Science of Buddhism”) offers yet another oblique reference to science, this time the scientific study of ancient languages, particularly Sanskrit, which established the academic study of Buddhism in the West. Although this chapter is the most removed from what Buddhism and science usually implies, it is where Lopez voices his own perplexities most clearly. His point is that Buddhism has been different things to different people. The academic, text-based version articulated by Orientalist scholars was maligned by Theosophists, who looked upon Buddhism as the seat of a deep, personal, and ageless truth. And according to Lopez, those who take a scientific interest in Buddhism reduce the wealth and complexity of Buddhist practice into the crude quantifications of rectal thermometers and brain scans. Lopez makes sure to offset this scientific reading of Buddhist meditation with his own version, featuring a detailed catalogue of the images and visualizations entailed by Vajrayogini meditation (“The Meaning of Meditation”).

The crowning question is “Who is the Buddha, and who speaks in his name?” Lopez takes the growing interest in the dialogue between Buddhism and science as an occasion to pose this question, and as important as the question is, it is posed to the detriment rather than benefit of the dialogue. Lopez clearly suspects that by submitting to the legitimating aegis of science, Buddhism is forced to relinquish too much of itself, including its claims to superlative knowledge. Lopez sides with the Dalai Lama when the latter expresses his unwillingness to relinquish supra-historical views of the Buddha, for then, “the Buddha would only be a nice person.”

But why is Lopez, who aligns himself with those who enlarge rather than reduce the Buddha, so indisposed toward a conversation that seeks to enlarge Buddhism in a different way? If “scientific Buddhism” was initially forged as part of an apologetic mission, it need not be reduced to an apology, and the persistence of interest (as well as the contributions of Buddhists like Gendun Chopel) suggests that there is something worth exploring. The conversation, which is dominated by personal practitioners, could benefit from the participation of scholars like Lopez. Aloofness from the endeavor puts Lopez in the position of the Orientalist scholar who never sets foot outside of Europe but lords his authority (and his musty texts) over the “amateur” and “ignorant” practitioners. Lopez is perplexed by the many faces of Buddhism because he sees this as a question of power—of who gets to wield the authority to represent Buddhism. He denies that the Buddhist teaching of insubstantiality and essencelessness is a legitimate explanation of Buddhism’s own multiple and variegated nature. Lopez purports to “give the Buddha the last word” by quoting from the Pali Canon—a section in which the Buddha declares that those who believe he hammers out the dharma through reason alone and does not possess superhuman knowledge will wind up in hell. But why reduce the Buddha to this passage?

In another section of the Pali Canon, the Buddha rejects the extravagant claims made on his behalf and demands that his followers critically investigate the path and know for themselves, just as one closely examines the footprints and marks left by an elephant in order to be led to the elephant itself. It is possible to accept both versions of the Buddha.

Francisca Cho is an associate professor of Buddhist studies at Georgetown University in Washington, D.C. Her current book project looks at how Buddhist views of language can be applied to resolve the conflict between religion and science in contemporary Western culture.