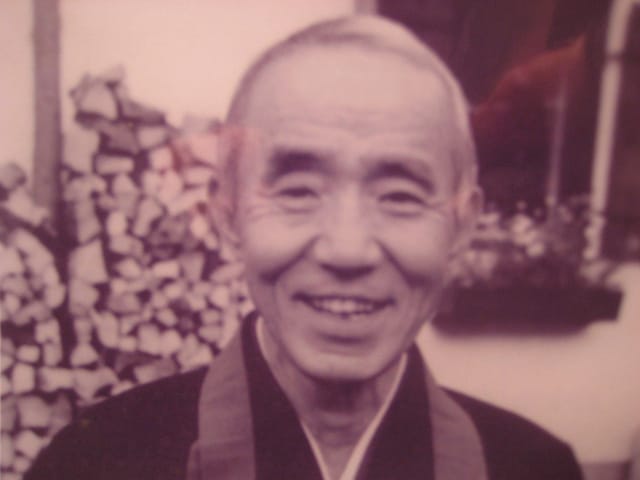 Reginald Ray writes a remembrance of Zen master and famed calligrapher Kobun Chino Roshi, who died tragically with his young daughter in July, 2002.

On July 26, 2002, Kobun Chino Roshi drowned trying to save his five-year-old daughter Maya, who had fallen into a pond. The deaths of father and daughter were a terrible blow—first to his wife and two small surviving children, then to his immediate students, and beyond that to all who had come to know Kobun and love him for his gentleness, his warmth and the profundity of his realization.

In January of this year, Kobun accepted the World Wisdom Chair at Naropa University, a position he was to have held for at least three years. Pending the renovation of Naropa housing for him, Kobun took up residence at the Shambhala Mountain Center (formerly Rocky Mountain Dharma Center) in the mountains of northern Colorado, commuting to Naropa to teach. Kobun loved the land, and he lived there happily from early January until his death.

During this time, Kobun and his family resided in a medium-sized trailer with one tiny bedroom and a combination living room, dining area and kitchen. It was a very small space for a family of five, including three small children—Maya and seven-year-old Hatsuko, both girls, and Alyosha, a fiery three-year-old boy—and all the furnishings and appliances, the family shrine and Kobun’s books.

Having lived on the land with my family for several years, I knew the 25-year-old trailer well. When I heard that Kobun and his family were living there, I immediately pictured a scene of serious overcrowding and constant mess and chaos. I wondered how anyone could possibly live in such conditions with contentment or, for that matter, any sanity at all.

But when I went to visit Kobun for the first time, I entered a scene that was nothing like what I had imagined. Then and every time I went to see him, which was every two or three weeks, I had the feeling I was stepping out of the rather mundane and restricted outdoor world into a realm of huge inner space. The walls of the trailer always seemed to be moving away from you, and the ceiling, though low, seemed somehow to stretch high above. It was a space you wanted to be in. Suddenly you felt more present and alive just being there. I found it so enjoyable to come to see Kobun, to walk in the door of the trailer and feel all of that space—my mind could finally open out and relax completely!

Everyone was always in the main room, because there was no other place to be. And yet it never felt cramped. There always seemed to be so much space and room for everyone. It was as if, within the universe of this small trailer, there were these different galaxies slowing twirling in space, each with their own self-contained beauty and majesty. Katrin might be at the stove way over there, brewing all of us some tea; Kobun and I might be sitting on the floor at a low Japanese-style table over here; and the children might be playing, coloring, painting or building something at various places around the room, periodically doing acrobatics or climbing over each other or Kobun and me.

One might ordinarily think of great spaciousness as somehow cold, isolated or lonely, but it wasn’t that way at all in the trailer: when you came in the door, you were met with Kobun’s gaze, warm and welcoming and alive with delight. And, as always, so still. And you found yourself drawn into a room that, for all of its vast feeling, was so inviting and accommodating that suddenly you felt you could really be yourself, whoever or whatever that might be just then. Within all that space, you felt welcomed, known and appreciated.

The children clearly felt this remarkable spaciousness and intimacy and reflected it in their behavior. They each spun out their worlds, their creativity, their energy, their conflicts, their emotional upheavals, quite openly in that space, without fear or hesitation. In that space it seemed so natural to hold the children in our awareness with warmth and appreciation, even when talking about something else. I learned something important there: that the more space there is, there is that much warmth and that much room for intimacy, appreciation and delight.

The space in the trailer was extraordinarily quiet. Kobun himself spoke rarely, something his wife Katrin would joke about regularly. Among the rest of us, there was little extraneous talk. Even the children’s talk, even when complaining, random or nonsensical, seemed somehow always apt and to the point. There would be quiet talk, with occasional exclamations, yelps or shrieks from the children, but there was also a basic silence underlying all of it. The silence in that trailer was not a repressed or uncomfortable silence. It was not the kind of silence where you felt you couldn’t or shouldn’t speak. It was more the kind of silence that comes about naturally when things are in balance, reality is abundant, and nothing needs to be said. Such silence is an expression of peace and of joy.

Since Kobun’s death, it has struck me frequently what a contrast the silence in that trailer was to our usual way of using speech, in which much of what we say in the course of a day is designed to assert our existence and importance. The children also seemed to sense the warmth and inclusiveness of that silence, for they seemed to feel little need to demand that their parents take notice of them or acknowledge their existence. Somehow, they knew they were being continually held in warm awareness and so their speech could take other, less demanding and neurotic forms. The proof for them may have been that in the space of the trailer, their excitement, emotions and conflicts—erupting as part of their moment by moment lives—met with no resistance and no judgement. Response, yes, and comment, yes, but after an eruption, as after a mountain thunderstorm, the atmosphere would be suddenly somehow clearer and brighter than before, and everyone might feel more alive and more cheerful.

Since Kobun died, I have also been strongly struck by the contrast between the space of Kobun’s trailer and the usual spaces we inhabit in our lives. Most spaces we find ourselves in require us, without our even realizing it, to narrow ourselves down and reduce our persons in order to “fit in.” We sense the subtle expectations of our environment and we turn down the flame of our awareness, often until it is barely flickering at all. We are always intuiting others’ expectations of who we should be and what we should see and not see, and we adapt—not just how we act, but more importantly what we permit ourselves to experience.

Kobun’s mind was truly free of thinking things should be one way as opposed to another and this was why, for me anyway, it was so liberating and joyful to be around him.

After Kobun and Maya died and after the cremation, Katrin, Hatsuko and Alyosha returned from Switzerland where the accident occured, to the Shambhala Mountain Center, and 1 went over to visit them in the trailer. Without realizing it, 1 had come to think of the trailer as this place of great space—a place of vastness, silence and intimacy where your mind naturally fell open, your awareness extended out without limit and you felt free. But when 1 entered the trailer with these expectations in mind, I was stunned to discover that, with Kobun’s death, that space had completely disappeared. I now experienced the trailer as an utterly ordinary place, somewhat dingy, rundown and cramped, where all of your normal, small experience of yourself remained fully intact.

Katrin helped me gain some understanding of this startling transformation in an exchange we had on this first visit after Kobun’s death. She was saying that after Kobun and Maya had died, she felt the strong need to return to SMC, at least for a while. I commented on the boundless, peaceful, magical aspect of the land itself, so unpredictable and yet somehow always providing whatever is needed on one’s journey at that moment. Katrin responded, “Every space I was ever in with Kobun was that way.”

So this was why the space in the trailer was so extraordinarily alive and grand when Kobun was here, and why it has returned to being so ordinary now. Kobun’s mind! Kobun’s awareness that surrounded him wherever he went. And maybe that is why Kobun wanted to live at SMC—not because like the rest of us he was looking for something, but because the huge space of this land reflected who he already was.

Shortly before he died, Kobun gave me a calligraphy. From our conversations, he knew of my love for this land and also, I am sure, of my love for him. Though I did not know it, I think he saw clearly that those were not two loves but one. From many things he said over the course of the winter and spring, I can see now that he knew his death was approaching and so this calligraphy was a kind of farewell gift. As he gave it to me, he translated it roughly, and not without humor, “Shambhala Mountain Center is in your mind.” Then he gave a more literal translation—“The sacred land is in your mind.”

Kobun was saying in the calligraphy, I think, that the space I love on this land, the space I found and loved in Kobun’s mind, is not just “out there.” Not just ultimately or in the future, it exists within— right now at this moment, it exists within. It is always there. It can go with you. You can discover it wherever you are. Kobun was saying, “What you love on this land, what you love in me, you must now discover for yourself, in yourself.” ♦