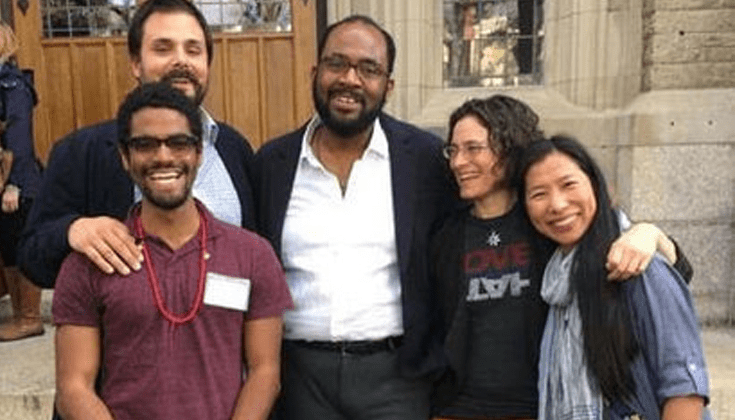 We spoke with Lama Rod Owens about the importance of this coming weekend’s Third Buddhism and Race Conference at Harvard. Parts of the conference will be livestreamed on Harvard Buddhist Community’s Facebook page.

The conference “started two years ago as a forum to address issues surrounding race and racism within the Buddhist community.” This year’s event includes three days of panels, conversations, and workshops with an impressive roster of dharma teachers and Harvard Divinity School faculty, representing a diverse mix of knowledge and experience.

We spoke with Lama Rod Owens, one of the conference’s organizers and presenters, about the theme of this year’s conference, and the importance of having these conversations around Buddhism and race.


What is the goal of the conference?

The theme of the conference is “Having the Conversation.” So essentially we want to create this space where we can gather to have the conversations around race that are difficult for many sanghas to have. We hope that people are able to walk away with some of the skills needed to further or to continue the conversation in their home sanghas.

We gather and invite both lay practitioners and dharma teachers because we want people to see what having the conversation looks like, how one actually has the conversation. We’re trying to model what the conversation can look like, and provide the conditions for people to further empower themselves and do this work in their sanghas.


It’s such an important conversation to have, and one that can make people pretty uncomfortable. Do you find that getting people out of their comfort zones allows for real learning to happen?

Absolutely. I think that many people are really afraid to talk about this because there’s just such a level of unknowing. It’s so deeply tied into our own kind of suffering. Depending on one’s intersectionality, that conversation is about the ways in which one has been marginalized and excluded. The other end of the conversation can be about the ways in which one’s privilege and positionality in the world has been exclusively maintained through the marginalization and exclusion of others, other groups. There’s a lot of woundedness, and hurt, and guilt, frustration within that space.

We have this practice of dharma that can actually help us to hold space for what arises in our experience when we enter into dialogue.

What we’re trying to also do is to remind people that we have this practice of dharma that can actually help us to hold space for what arises in our experience when we enter into dialogue. I keep seeing these comments on Buddhist media sites. Right now my short teaching on Tricycle is running for Black History Month. When we actually launched the intro to the series earlier this month, there was such a pushback on the site from dharma communities, about how this is divisive, these conversations. This is the same kind of pushback that happens over and over again, which are just strategies for us to avoid dealing with our own discomfort.


At last year’s conference, you mentioned doing away with the idea of a “safe space,” for the weekend, and instead cultivating courage. Could you explain that?

Yes. We do away with this idea of safety, but what we do instead is invite this idea of “courageous space,” a space where we encourage folks to take risks. And we do, that’s been very evident, especially last year, where many people were really stepping out of their comfort zones. We encourage people that feeling unsafe doesn’t mean that you’re in danger. We try to help people hold space for that, to make that discernment. You may feel really unsettled, you may feel off; it doesn’t mean that you’re actually in danger. The courageous space really helps people to have a framework to enter into, and hold space for risk and discomfort.


How will this year’s conference differ from the last? Will all that’s going on right now in the political world inform the conversation at all?

Well, it will be different in some ways, and not so different in other ways. You know we talk about politics and the election and everything, but one thing we have to be very clear about is that nothing has changed for the most marginalized groups in this country. What has actually changed is that everyone understands what that really looks like because it’s happening to many more groups. That definitely does change things, but for me, not that much.

We have the material now—this idea of white supremacy, capitalism, patriarchy, isn’t something that’s a figment of one’s imagination.

It’s still the same conversation, but now we have a lot of evidence that people can’t run away from or deny. So this year we can actually talk about whiteness and supremacy and power, and how that intersects with other forms of oppression like misogyny, and so forth. We have the material now — this idea of white supremacy, capitalism, patriarchy, isn’t something that’s a figment of one’s imagination — this is something that’s very alive and vivid. It has not died. This is not a thing of the past. I think one of the arguments that people have often used in the past few years is that, “Oh, we’re post-racism,” but actually we’re not. It makes this conversation much more vital and much more appropriate.

We hope to get into some of these other issues that race is definitely a part of, but just a piece of, and we hope that for the next conference we can actually move, maybe, out of race. Maybe we could have a more general conference around Buddhism and social justice or social change, which opens the conversation to all these other issues, too. So that we can begin to see the interconnectedness of oppression, power, and so forth.