A divorce and a bee infestation—these are things that can sting. Jennifer Lauck on learning to embrace what is, just as it is. 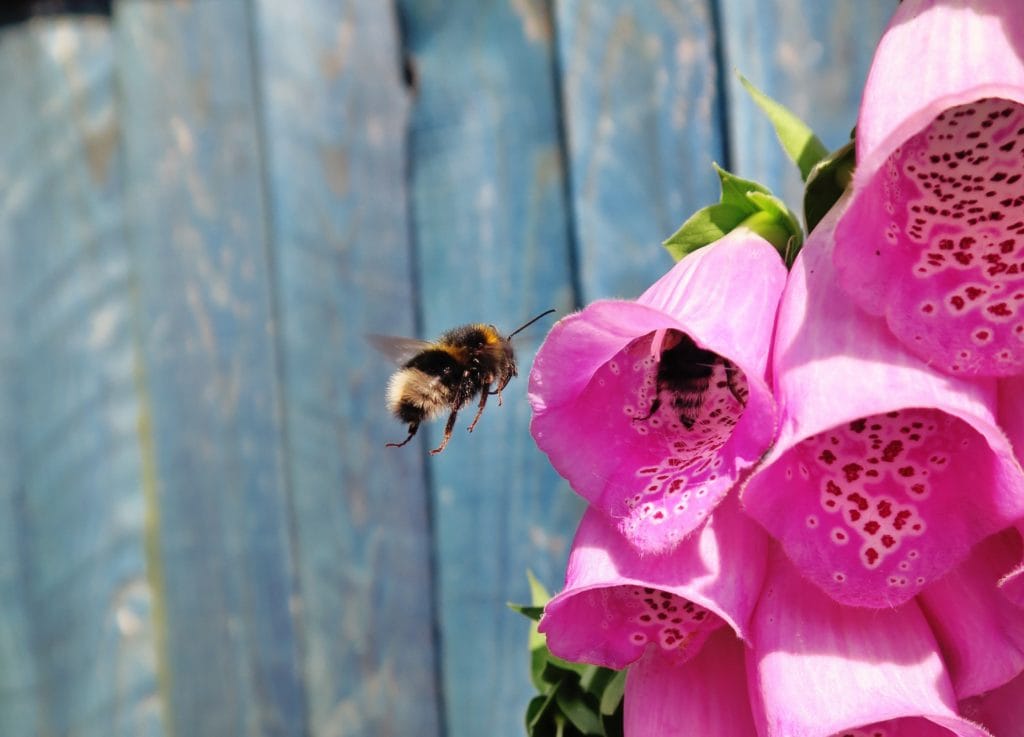 A bumblebee lifts from a hole in the ground. It rises in an unsteady fashion, as if tethered by an invisible wire. The wings move so fast the motion cannot be seen but is only heard as a humming buzz. The creature makes an adjustment and wobble-flies past my shoulder.

I lean back as it gathers direction and speed. Four-y.earold Josephine screams, runs up the porch steps and then into the house. She slams the back door so hard the house quivers. Nine-year-old Spencer hides behind me and grips my arm with such intensity the circulation is cut to my hand.

Another bee lifts out of the hole, the same routine all over again and right behind is another.

We stand on wet grass that is overgrown and lush. I don’t mow. Mowing is a man’s job and Spencer is too young. Pretty soon, I tell myself, I’ll have to get a man or a mower. Or maybe I’ll get a gardener.

I shake my arm to get the feeling back and Spencer stands on his toes in order to peek over my shoulder.

“Will they sting us?” Spencer asks.

“Are you covered with pollen?” I put my arm around my son and cup the back of his head with my palm the way I do—something I’ve done since he was baby. It’s our mother–son habit. Our little peculiarity. His head fits my hand perfectly and he wiggles a little as if to nestle in. “Sweets,” I say, “bees are not interested in you unless you are a flower.”

Two bumblebees return to the hole, lowering their pollen loaded legs into the ground. Spencer hides his face against my arm and I decide to try humor.

Spencer chuckles, which is nice because his father says I don’t have a sense of humor. I wish he were here to see how it’s not true. I’m funny. I’m hilarious to a nine year old.

“I mean, they don’t even knock on the door and ask before they take up residence here,” I continue. “There is no lease and they don’t pay rent. What is the deal?”

Spencer laughs harder still and I roll my eyes with a great show of being outraged. He eases from around my side and goes down on one knee to get a closer look at the bee entry and departure point. The hole, if you weren’t looking for it, would be impossible to find. It is no more than the size of a dime with a small rise under the gravel.

“How many live down there?” he asks.

I lift my hands and then let them drop to my sides. “I have no idea.” Bee infestation is a man’s job, the same as mowing and car maintenance and taking out the trash.

Jo sneaks up behind us and, like her brother a moment ago, she hides behind me.

“No, honey,” I say, “but they aren’t going to bother you. They want flowers, not little girls.”

I put my arm around Jo. She’s wearing a pink silk dress over a yellow silk dress over a neon green silk dress. She simply cannot bear to leave one of her princess dresses on a hanger so they are all on her body in layers. Under the dresses, she wears every pair of underwear too. I am thinking she might have been a refugee in a past life.

Two more bumblebees hover around the trunk of the red oak tree, unsure about a small boy so close to their landing strip. I tap Spencer and point up toward the incoming bees.

On his knees, Spencer isn’t sure what I’m trying to say and he moves his head all around. He looks like a dog down there on all fours. When he spots the hovering bees, which are lowering themselves to their home, he yelps. In a flash, both kids run back to the house and it’s just me, on the wet grass.

The bees drop to the ground and crawl into their hole.

I’ve been on my own for nearly a year. Fall, winter, spring, and now summer. It’s good. It’s right. It’s the best thing for me, for my former husband, and for the kids—who didn’t deserve to grow up in a home where the big people argued all the time. But it’s surprising how many things I delegated to my husband. I just didn’t have time or interest in infrastructure. If a wire shorted out or a pipe got clogged or the car needed oil, he was the go-to guy.

If he were here now, he would, without question, have a solution. He would just kill them by dousing the nest with a hose. That’s how his own father, a Nebraskan with a cattle ranching legacy, would have managed such a pesky situation. Heck, I wouldn’t even have been consulted.

But here I am, single—a single mother—and this is what I would call an “infrastructure” issue. I am now the go-to girl.
One of my friends, married to an abusive man, suggests I put a bucket over the hole. She says the bees will likely just move on or die. When things get bad in her marriage, she takes to her bed and hides under the covers for days. She tells her kids that she is sick, but she’s not. She’s depressed.

Another one of my friends, more like an acquaintance, says I should just get some bug spray and let the bees have it. Thats what she would do. I have no idea how her marriage is going. We aren’t that close.

I have another friend, married to a cop who works the swing shift (meaning she never sees him), and she says that the best way to remove bees is to go out—late at night—and simply ask them to leave in a firm yet loving voice.

“I do this all the time with sugar ants,” she says. “And you know what, they just skitter away.”

This woman has recently launched a practice as a clairvoyant. She says she can see auras.

For the next few days, I make it a daily practice to study the industry of the bumblebees. After the kids are fed and taken to school, I sit with my elbows on my knees on the bottom step of the back porch, just a few feet south of the nest, and I watch bees lift off, fly over to the hydrangea and beyond, and return.

Bumblebees, according to the law of aerodynamics, are not supposed to fly. The body is the issue; it’s just too big for those tiny wings. And yet, there they go—over and over again. Apparently this is about wing speed. They are the hummingbirds of the insect kingdom. A bumblebee, therefore, defies logic and science.

I have discovered that in early Christian traditions, monks lived in beehive shaped huts, which represented the aim of a harmonious community. The hum sound of chanting is like that hum sound of bee industry.

While I am not a practicing Christian, having set that tradition aside long ago, I am a student of Tibetan Buddhism. Each day, I finger prayer beads, read books written by enlightened masters, and even meditate. It’s true—there is a hum to my chants of mantra which I accumulate for the benefit of all (which includes bees). I hadn’t thought of it that way before.

While my former husband mocks my interest in Buddha, reminding me that I was never spiritual in all the angry years we spent together, I remain focused. Without the constraints of our marriage, I like to think that perhaps I am something like the bumblebee. Meditation, which is—in part—an effort to transcend the human condition of suffering, defies the law of reason and aerodynamics. According to a book I read, Power versus Force by David Hawkins, less than half a percent of the human population will achieve transcendent states like pure love. Hawkins also writes that we, as a species, are stuck in the age of reason, meaning that every problem can be rationalized or explained. Yet, when one transcends to higher states, reason and logic no longer apply.

There is no reason for the bees and yet, as I study them (versus slaughter them), I discover I am the bees and in an odd way, the bees are me. Perhaps that is why they are here, taking over the backyard.

He stands at the threshold of the back door and holds a mug in his hand. Hot chocolate. The mug reads I Love You. I’m on the bottom step of the back porch with my coffee. There is no message on my mug.

“Just watching the bees,” I say.

Spencer pads across the porch and down the steps. He sits on the bottom one and sips at his cocoa. Over the rim, he eyes the hole in the ground. Several bees lift off and fly away.

“They are still here,” he points out.

A gray squirrel jumps from the roof of the garage and into the red oak tree. Spencer points. “A squirrel is just a rat with a good PR campaign,” he says, a joke he’s heard from his dad and which is actually pretty funny.

“A squirrel is just a rat with a better outfit,” I counter and Spencer sputters chocolate in a dramatic spray.

“Oh, that’s good,” he says using the back of his hand to wipe his mouth.

The squirrel disappears on the other side of the fence and a few bees land on the ground and drop out of sight. I still have no idea how many bees live there, how deep their nest goes, or what they are creating in their dark world, but I like to imagine them down there—humming around, following their ancient code.

“Have you decided what to do about them?” Spencer asks. He leans into my side and I put my arm around his lean little boy body. He smells like chocolate and shampoo.

I look down at my son—sweet face, dark eyes, shining hair that is thick and shaped in that popular bowl cut style.

He leans against my shoulder again.

“That’s probably fine,” he says. “They aren’t bothering us.”

I move my hand over the back of his head, finding that place where my palm fits so well. He moves his head a little in my hand, as if to nestle in.