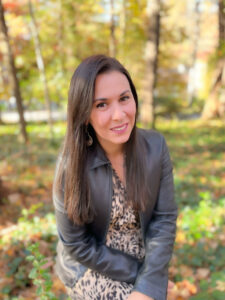 We’re thrilled to announce that a new associate editor has joined Lion’s Roar—Mariana Restrepo. Her focus will be on the much-needed work of promoting the voices of Latinx Buddhists.

Over the years, Lion’s Roar has endeavored to dramatically increase the number and prominence of teachers and practitioners of color in all our publications, and with Mariana joining us, we will able us to go much further.

To help you get to know Mariana a little better, we’ve asked her to share a bit about herself.

I was born in a small coffee growing city in the Colombian Andes. I grew up Catholic, and it wasn’t until I moved to the United States at age fourteen that I met people who practiced anything other than Catholicism. I became fascinated with different religions, and soon my curiosity—or as I would say now, my karma—brought me to Buddhism.

My formal practice began in the Theravada tradition. I attended a Thai Buddhist monastery in South Florida and quickly became a regular. Much of what I experienced there was the common experience of Theravada Buddhists past and present, in Thailand and around the world—chanting the suttas, offering dana, and participating in various community gatherings at the wat.

As I began to learn more about other forms of Buddhism, I gravitated toward Vajrayana. I spent a summer studying Sanskrit at a Tibetan Monastery in Nepal. Then I pursued graduate studies in Buddhism. My academic focus was on issues of transmission, legitimation, and adaptation of “traditional Buddhism” in the West, particularly the construct that we call “American Tibetan Buddhism.” Throughout my graduate studies I was an active member at a Karma Kagyu center in South Florida.

After completing my master’s degree, I moved to the Smoky Mountains in Tennessee and became the coordinator of a newly started Karma Kagyu retreat center. Moving from Miami to Tennessee, I experienced as much culture shock as I had as a teenager moving from Colombia to the U.S.—if not more. Intellectually, I continued to explore my hybrid Buddhist identity; Southerner was now more firmly part of the mix.

As my practice deepened, I found myself with a group of men and women entering the traditional three-year retreat at a major Tibetan Buddhist Monastery in Upstate New York. Head shaved, jewelry put away, I donned robes and once again entered a foreign world. But about halfway through the retreat I was faced with a difficult choice and made the decision to leave.

I embarked on a year-long pilgrimage through India and Nepal with one of a handful of retreatants who’d also left. At the end of that year, we got engaged. We moved to Asheville, North Carolina, where we now live with our toddler son. In Asheville, I have been facilitating a lay-centered Tibetan Buddhist group and I’m in the process of starting another dharma group for Spanish-speakers. I also attend and help out at one of the city’s main Buddhist centers.

In conclusion, I’ve been heavily involved with Buddhist communities, ranging from diverse sanghas in South Florida, to Buddhist centers in Appalachia, to a major monastery in the Northeast. This has given me the opportunity to meet Buddhists from all walks of life, learning about the many expressions of Buddhism here in North America and exploring my own Buddhist identity. So, now, here I am back in the South, still Buddhist, still Latina, and still asking questions about the American Buddhist experience and all its complexities.

I’m thrilled to be working with Lion’s Roar on this initiative to make the Buddhist conversations in the West more diverse and inclusive. My vision is to facilitate a platform for Latinx Buddhist voices to join the conversation and be heard. I can be reached at [email protected]

Thank you, Mariana, and welcome!