The nun Yoshihime thrusts the gatekeeper’s head between her legs. Here is the gate through which the buddhas come into the world, born of women, born of wisdom. Judith Simmer-Brown comments on this ancient Zen story. 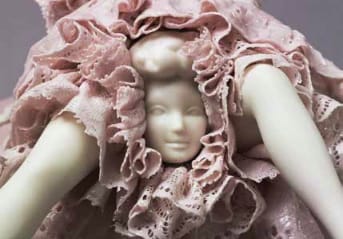 Yoshihime was a nun at Tokeiji and the daughter of a general. She was very strong, and her nickname was “Devilgirl.” She wanted to meet with the teacher at the monastery of Engakuji, but the gatekeeper monk barred her way with a shout: “What is it, the gate through which the buddhas come into the world?”

Yoshihime grabbed his head and forced it between her legs, saying, “Look, look!”

The monk said, “In the middle, there is a fragrance of wind and dew.”

Yoshihime said, “This monk! He’s not fit to keep the gate; he ought to be looking after the garden.”

The gatekeeper ran into the temple and reported this to the teacher’s attendant, who said, “Let me test her.”

So the attendant went to the gate and asked her again, “What is it, the gate through which the buddhas come into the world?”

Yoshihime grabbed his head and held it between her legs, saying, “Look, look!”

The attendant said, “The buddhas of the three worlds come, giving light.”

Yoshihime said, “This monk is one with the eye; he saw the eighty-four thousand gates all thrown open.”

This koan makes me laugh with delight! All those old monks of Engakuji were so afraid of women in their midst that they were compelled to test the women’s dharma insight in order to allow them entrance. They were no match for our devil-girl Yoshihime!

This classic case asks about the gate through which buddhas come into the world. Immediately women understand the most obvious answer—through the cervix and vagina. Not only buddhas, but all beings enter the world through their mothers’ vaginas. Only the most obtuse monk would not think of this. Rather than hiding or ignoring her gender identity, Yoshihime flaunts it by pressing the gatekeeper’s head between her legs, flustering him completely. This is all the more potent because of the prevailing views of the unclean, repulsive qualities of women’s vaginas. Devil-girl knows how to deal with the misogynist gatekeeper!

Misogyny is not just a distant memory. Years ago, I was the leader of a predominantly male international delegation to Japan. Our Japanese hosts were extremely nervous, as they had never dealt with a woman leader before—they seemed terrified. Every time I tried to work out our schedule and logistics, they looked over my shoulder at the men, asking them questions meant for me. Later, in a tiny country gift shop, I found a beautiful set of teacups, one large and the other small. Spontaneously I turned to the eldest of our Japanese hosts, asking incredulously, “This couldn’t be for a man and woman?” Deeply embarrassed, he reluctantly nodded, and for a moment, we laughed together. Everything changed. Thereafter, our hosts related to me awkwardly but respectfully, and we were able to laugh about the discomfort.

But there is another level of Yoshihime’s wordless answer to the gatekeeper’s question. The revered Prajnaparamita, or “perfect wisdom,” the most sublime of dharma teachings, is sometimes embodied in a female form and called the “Mother of all the Buddhas.” Only through realizing her inexpressible teachings of emptiness, which is also suchness, can anyone realize their true nature and become awakened. As the Prajnaparamita in 8,000 Lines says:

She is the Perfect Wisdom who gives birthless birth to all buddhas.
And through the sublimely Awakened Ones,
it is Mother Prajnaparamita alone
who turns the wheel of true teaching.

A woman’s body is a central symbol of emptiness in India and Tibet, where she manifests as the elusive and awakened dakini, or sky-dancer, the Buddhist goddess-trickster of yogic wisdom, an aspect of the Mother of Wisdom. Her cervix is the symbol of the esoteric sacred mandala of emptiness and suchness, expressed in the renowned diagram of double crossed triangles. For the conventional mind, the dualities of purity and impurity, male and female, awakened and confused, are resolved in these symbols of emptiness.

When Yoshihime presses the gatekeeper’s face to her crotch, she is testing his own awakening. The gate through which all buddhas come? She turns the question back on him — “Look, look!” She is asking him to investigate the gate from his own experience. In his affected answer, the image “the fragrance of wind and dew” is meant to evoke nonduality between the extremes of her two legs: the resolution of being and nonbeing, form and emptiness, ultimate and provisional truth. However, his response does not meet the direct, earthy, embodied wisdom to which she was pressing his face; it resolves no dualities. Who but a complete fake would comment about wind and dew when pressed into the crotch of a woman?

But the abbot’s attendant has a deeper response to Yoshihime’s “Look, look!” He does not attempt to change the subject or ignore her earthy wisdom. He proclaims that all the buddhas of the past, present, and future come through this gate of the Mother. When he speaks of “giving light,” he is acknowledging the name of the great dharma hall of Engakuji, known as the Great Light Hall; all the awakened ones of Engakuji have passed through the cervix and vagina of the mother of all the buddhas, and so Yoshihime is to be revered and respected. In one flourish, he has flung open the manifold gates that are none other than the single gate of the Mother. We prostrate to Yoshihime, the radiant devil-girl! May we ourselves realize the dharma gate of the Mother!

Judith Simmer-Brown is Distinguished Professor of Contemplative and Religious Studies at Naropa University and a senior Buddhist teacher in the Shambhala Buddhist tradition.