Professor Donald Lopez on how the understanding of buddhahood evolved and expanded in the centuries following the death of the historical Buddha. 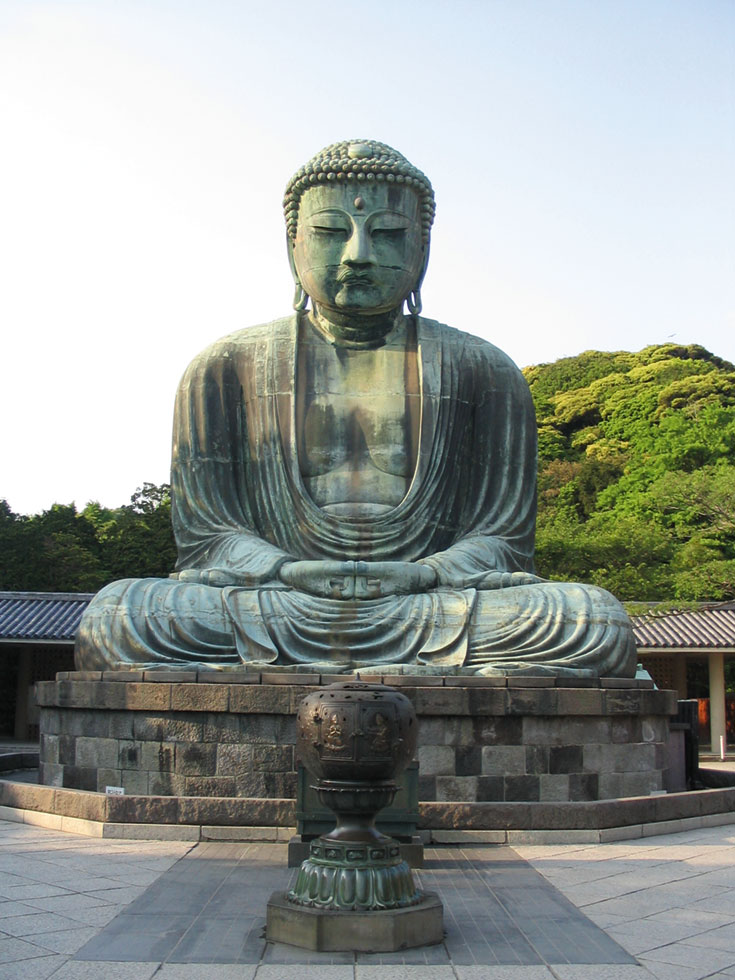 The Great Buddha of Kamakura depicts Amida Buddha (Skt: Amitabha), the “Buddha of Infinite Light,” who is the central object of Pure Land practice. Photo by Dirk Beyer.

In Sanskrit, the word buddha can mean “awakened,” “expanded,” and “understood.” It was the title bestowed on an itinerant teacher about whom little is known, apart from the teachings that have been attributed to him.

The Buddha first appears in the rock edicts of Emperor Ashoka, who ruled India from 268 to 232 BCE. For Buddhists over the centuries, across Asia and now the  world, he was a person who set out long ago, as a bodhisattva—a person intent on enlightenment—in search of a state beyond sorrow, a state of liberation from birth and death that he called nirvana. Finding it, and thus achieving buddhahood at the age of thirty-five, he spent the remaining years of his life teaching that path to others and establishing a community of monks and nuns who dedicate their lives to his teaching. That teaching is called the dharma and that community is called the sangha.

In the religions of India, as in many religions, authority derives from antiquity. Jesus is the messiah foretold in the Hebrew Bible; Muhammad is the last in a long line of prophets. Antiquity is also central to Buddhism—not only in the belief that the Buddha spent billions of lifetimes on the bodhisattva path, but also that there were other buddhas before him, as many as twenty-four, according to one tradition.

Just as there were buddhas of the past, there will be buddhas in the future.

The belief in previous buddhas seems to have been an important factor in the success of the Buddhist tradition in its early days. We find in the edicts of Ashoka a reference to his enlargement of a shrine to a previous buddha. And just as there were buddhas of the past, there will be buddhas in the future. The next buddha, named Maitreya (“Kindness”), now resides as a bodhisattva in one of the Buddhist heavens, awaiting the time when all memory of the teachings of Shakyamuni has been lost, something that will not occur for billions of years.

Upon his death, the Buddha passed into nirvana—a word that has the sense of “extinction,” like a candle going out—never to be reborn again. All that remained was his body. He instructed his disciples to cremate his corpse and then bury his ashes in a mound at a crossroads. The relics were divided among his disciples, who entombed them in mounds called stupas. As the sole remnants of the now-absent Buddha, the stupas, and the relics they contained, would become the sacred sites of the Buddhist landscape.

The absence of the Buddha and the end of his teachings, however, was something that some members of the monastic community could not bear. Around the beginning of the Common Era, and thus some four centuries after his death, new texts began to be composed that purported to have been taught by the Buddha himself. These texts presented views of the person of the Buddha and of the Buddhist path that had not appeared before. Unlike earlier works, they were not part of a larger canon, each text instead offering a complete vision of enlightenment and the means to achieve it. 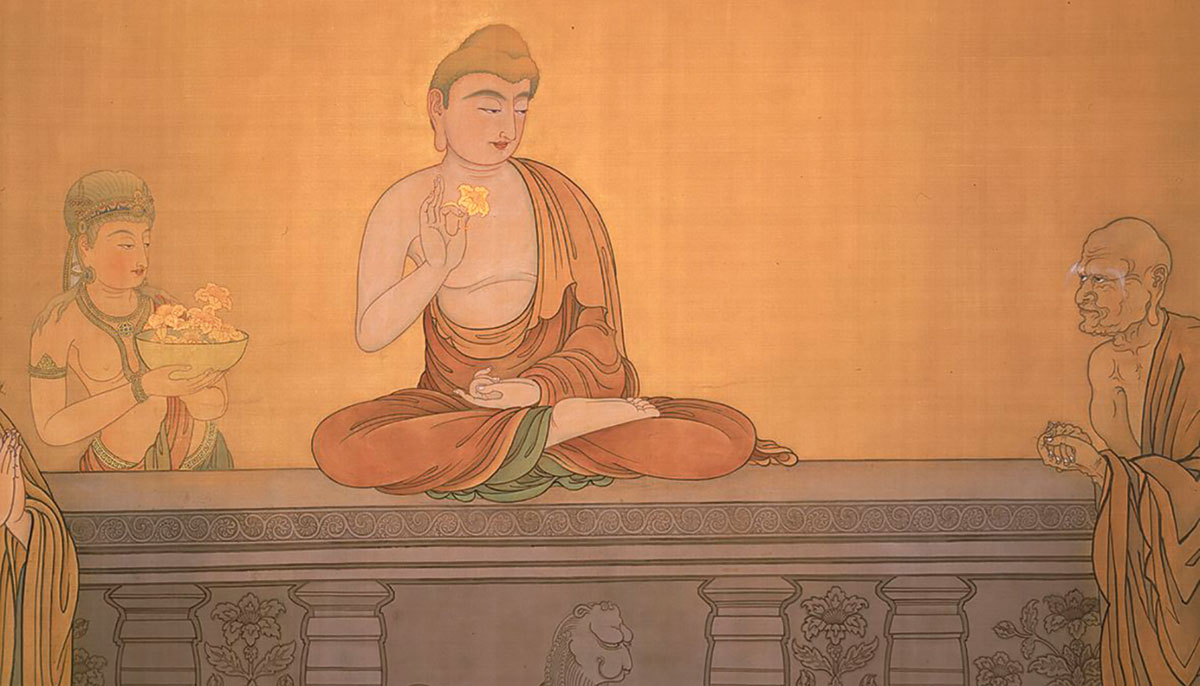 Zen is famously “a special transmission beyond words and outside scriptures.” It is said to have begun with the “Flower Sermon,” when the Buddha silently held up a flower and smiled. Only his disciple Mahakasyapa received the transmission of wisdom, and so became the First Patriarch of Zen. “Mahakasyapa smiling at the lotus flower (1897) by Hishida Shunso,” wikiart.org

These works have come to be known as the Mahayana sutras, the sutras of the “Great Vehicle.” They number in the many hundreds and include texts that are widely known by an English name: the Lotus Sutra, the Diamond Sutra, the Heart Sutra, and the Pure Land Sutra.

Many Buddhist monks of what are called the “mainstream schools” rejected the Mahayana sutras as inauthentic, earning for themselves the derogatory term “Hinayana” (“base vehicle”) from the adherents of the Mahayana. The new sutras nonetheless attracted their own devotees and commentators in India, and went on to be the most influential scriptures in the Buddhist traditions of China, Japan, Korea, Mongolia, and Tibet.

In one Mahayana sutra, the Buddha explains that all beings possess a buddha within themselves, a “buddha nature,” that need only be recognized to be realized. In another, the Buddha explains that he only pretends to pass into nirvana, that nirvana is in fact an illusion, and that his lifetime is immeasurable. In that same sutra, he declares that all beings are destined for buddhahood.

In another Mahayana sutra, the Buddha says that we do not exist, and yet the bodhisattva vows to free us. And in yet another, he reveals that although he is the only buddha for our world and our time, there are other buddhas in other worlds, worlds where we can be reborn and receive their teachings. Some of these are pure lands, so called because they lack the realms of animals, ghosts, and denizens of hell. Places where buddhahood is only one lifetime away, the most famous of these pure lands is called the Land of Bliss, the pure land of the buddha named Amitabha, “Infinite Light.”

These new visions of the Buddha led to various delineations of the forms or bodies of the Buddha, the most famous of which were the three bodies (trikaya). The highest of these was called the dharma body (dharmakaya), with “dharma” here referring not so much to the Buddha’s teachings but to his transcendent and immaterial qualities. It would eventually evolve into a kind of cosmic principle in which all buddhas partake.

The second of the three was called the enjoyment body (sambhogakaya), a glorious body that only appeared in the pure lands. The third was the emanation body (nirmanakaya). This was the body in which the Buddha appeared in our world in the guise of a monk. However, as the name suggests, this body was merely a display meant to lead the unenlightened. Furthermore, this familiar form of the Buddha was just one type of emanation body. The Buddha could also take the form of an inanimate object, like a buddha image, or an ordinary person, like an artist or musician.

These were all innovations to existing Buddhist doctrine, but they could not be represented as such. The Buddha had achieved omniscience on the night of his enlightenment, so there was nothing more that could be known. All new teachings therefore had to be traced back to him.

This allowed new texts to be composed in which the Buddha declared that a previous teaching had been provisional, and that what he was now teaching was definitive. Different texts, however, identified different teachings as the Buddha’s true and final view, requiring the creation of systems of scriptural interpretation. 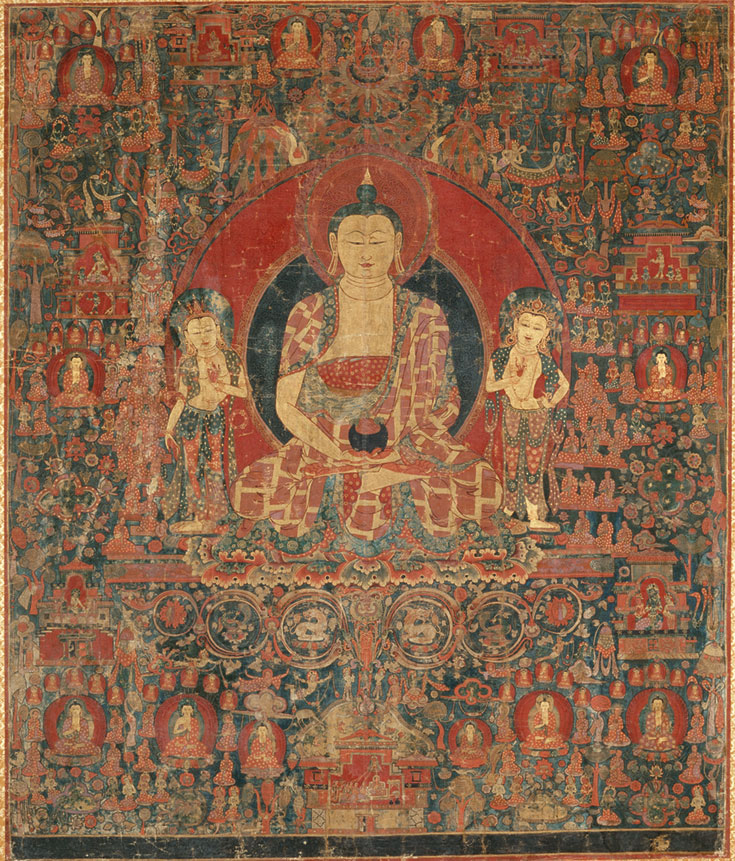 In addition to human buddhas such as Gautama, Mahayana Buddhism recognizes infinite enlightened beings who abide in pure lands free of karma and material existence. This Tibetan painting depicts Amitabha in his pure land, which is called Sukhavati. “The Jina Buddha of Infinite Light (Amitabha) in His Pure Land Paradise (Sukhavati),” Tibet, 15th c. / Nasli and Alice Heeramaneck Collection, Courtesy of www.lacma.org

Some thousand years after the passing of the Buddha, a new genre of texts began to appear, ritual manuals called tantras that set forth techniques for the achievement of all manner of worldly and otherworldly powers, including buddhahood. Again, these texts were often attributed to Shakyamuni, claiming that he himself had achieved supreme enlightenment via the tantric path.

Many forms of Buddhism, including Mahayana and tantra, then spread from India to other parts of Asia. It was only after many centuries that the traditions coalesced into the divide we see today, with Sri Lanka and Southeast Asia generally rejecting the Mahayana sutras and following the Pali canon, the last remnant of the mainstream schools.

In East Asia, Mongolia, and Tibet, the Mahayana carried the day, with yet more texts composed in the name of the Buddha, pretending to be translations of Indian texts. Even the famous Chan school, renowned as a “transmission outside the scriptures,” needed to trace its origins back to India, first through the mysterious figure of Bodhidharma and then, as ever, back to the Buddha himself, who was said to have transmitted his highest teaching by silently holding up a flower.

Amid all of this, one thing that remained constant was the importance of the stupa—called a chedi in Thailand, a chorten in Tibet, and a pagoda in East Asia—the repository for the relics of the Buddha. In Buddhist theories of history, in the far distant future those relics will break free from their stupas and reassemble in the form of the meditating master under the bodhi tree, where they will be worshipped by the gods one more time. The relics will then burst into flames and disappear. This will be the sign that the advent of Maitreya is nigh.

Donald S. Lopez, Jr. is the Arthur E. Link Distinguished University Professor of Buddhist and Tibetan Studies at the University of Michigan. His books include The Princeton Dictionary of Buddhism (with Robert E. Buswell, Jr.), The Tibetan Book of the Dead: A Biography, and The Lotus Sutra: A Biography. He lives in Ann Abor, Michigan.