Sometimes we’re committed to our meditation practice and sometimes we drift away. No matter what, Matthew Kohut believes we can always find our way home to the cushion. 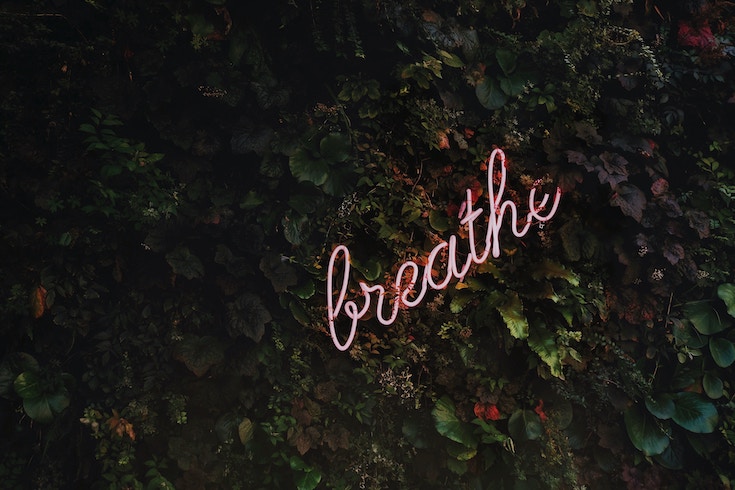 Photo by Tim Goedhart on Unsplash

While in my final semester of college in Baltimore, I learned how to meditate. My girlfriend and I arranged for a fifty-ish man from a local Buddhist center to give us an introductory lesson at her apartment for twenty dollars. When we answered the door and he saw two students who could’ve been his children, his face registered surprise. There was nothing trendy about meditation in 1987. “Mindfulness” was not a term used by anyone I knew.

He taught us vipassana, also known as insight meditation. The technique is simple to explain, but there’s nothing easy about it. We sat cross-legged with our hands near our knees, and we just breathed. He told us to focus on the exhale breath, and just let the inhale happen naturally. He said that our minds would wander, and that was okay. If our attention drifted away from the breath, he suggested that we tag those distracted thoughts as “thinking” and resume focus. He stressed the importance of not trying to suppress or control these thoughts—he described them as clouds passing through the sky, neither good nor bad. Just thoughts.

We practiced together for a few minutes, and he asked if we had any questions. I had so little idea how to respond that I said something like, “It seems pretty straightforward.” Then he went on his way. The whole thing probably took fifteen minutes. I wish I could remember his name.

This lesson arrived at a critical time when my mind was a swirling cauldron of confusion and anxiety. A year and a half earlier, I had gotten sober after a few years of heavy daily drinking. All the thoughts and feelings that alcohol had dulled came roaring to life, and I lacked any tools to cope. AA helped me stop drinking, but it didn’t offer anything to quell the incessant chatter in my mind. My thoughts replayed in endless loops, and I felt powerless to deal with them. Talking about this to a shrink or a roomful of strangers smoking cigarettes just seemed to perpetuate the problem.

It was immediately apparent that meditation could help manage this runaway brain. I had a burst of enthusiasm known as “beginner’s mind.” I read everything I could by Buddhist teachers such as Chögyam Trungpa and Thich Nhat Hanh. My practice waxed and waned over the next few months, but I knew it would play an important part in figuring out how to live well.

It was immediately apparent that meditation could help manage this runaway brain.

After graduating from college and working odd jobs for a few months, I packed the car and moved to Madison, Wisconsin, where some close friends were in graduate school. I landed a job with a ceramic tile contractor that paid $5.50 per hour, and began learning a new trade. I wanted to spend more time using my hands and less time living in my head.

Starting over in a new town where I had few social ties meant plenty of free time after work; I had no excuse not to meditate. It became a part of my daily routine. Gradually I increased the time of my sessions from ten minutes to twenty and then thirty.

Even though my practice was developing, it was lonely sitting by myself in a tiny apartment. I needed a community. A friend told me about her experience with Quaker meetings, and it sounded like something that might work for me. I began attending hour-long weekly meetings each Sunday. Suddenly, I was surrounded by people who were comfortable sitting in silence with each other. They welcomed me without question or reservation. The meetings also showed me that I could meditate for an hour. I began to observe a rhythm to these longer sessions.

I found that the first few minutes of meditation were often a settling-in period filled with a lot of mental chatter. The most common type of chatter was Planning Mind. “Don’t forget to send the check today.” “You still haven’t replied to Cynthia’s email.” Sometimes these thoughts included important information that I was afraid to let slip away. I was tempted to keep a pad nearby to jot things down, but this would have defeated the whole purpose of learning to acknowledge and dismiss fleeting thoughts.

A close cousin was Worrying Mind. “How can I possibly get everything done this week?” “Did I say the wrong thing in that email to Paul?” This was the superhighway to anxiety. I couldn’t get rid of these thoughts quickly enough.

Writing Mind was an occupational hazard that often barged in after planning and worrying subsided. A stray thought from a creative challenge would surface and demand that I puzzle over the wording of a specific phrase or sentence. This constant desire to narrate my thoughts spoke to a ridiculous sense of self-importance.

The most escapist form of distraction was Dreaming Mind. “Wouldn’t it be fun to move to Spain?” Sometimes songs start playing out of nowhere. These daydreams were the most seductive distractions.

In these Quaker meetings, after the chatter subsided, I would hit a stride where I could focus in a sustained way. Random thoughts would continue to surface, but it was relatively easy to acknowledge and dismiss them. Meditation allowed me to see the ways my mind would wander with a sense of detachment, and begin disrupting those patterns before they became too entrenched. This deep groove would last for a significant part of an hour. Finally, I would feel my attention begin to fade, and I would wind down in the last few minutes of the meeting, almost like a runner walking off a big race on the other side of the finish line.

This was so satisfying that I wanted more. I began attending a much smaller meeting on Wednesday evenings with a core group of five or six others. Nobody ever said a word. We just sat together in meditation for an hour. Occasionally we would chat afterward for a few minutes, but mostly we knew each other only through our time spent in shared silence. This meeting became one of my favorite times of the week.

This rhythm of working and meditating lasted about eighteen months, and it taught me to live with myself. Learning to sit comfortably with my own thoughts and feelings for an hour at a time turned down the volume in my brain. It wasn’t so loud and chaotic anymore.

And then my life changed. I moved back East, found different work, made new friends, and gradually drifted away from meditation. Occasionally I missed it, but it mostly became something I used to do. I took a course in Buddhism in my mid-thirties that rekindled my good feelings about it, but I didn’t begin practicing again. 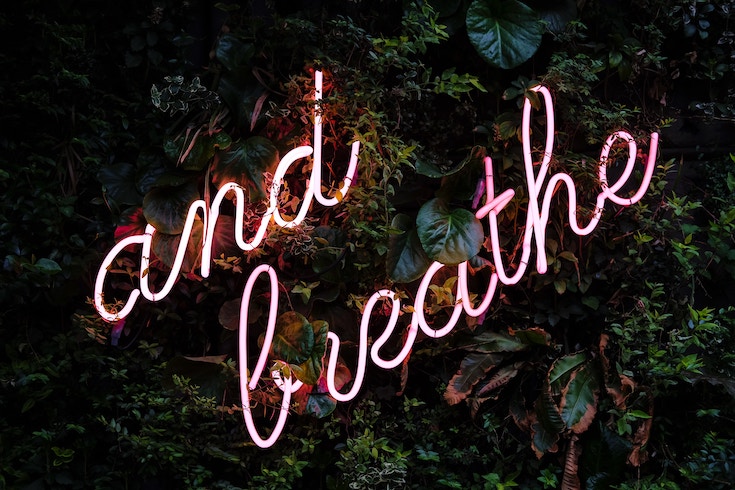 Photo by Valeriia Bugaiova on Unsplash

More than twenty-five years after that initial lesson, I spent a weekend with my dad at Johns Hopkins Hospital near the end of his struggle with leukemia.

While he napped one afternoon, I wandered the halls of this sprawling facility until I came across an interfaith chapel. The room was small, nondescript, and empty. I took a seat on the floor and began focusing on my breath. If ever there was a time that I wanted to be completely present and free of delusion, this was it. Sitting for ten minutes after so many years felt good. Like a former college athlete returning to the gym, I was out of shape, but I still knew the basic moves.

A few months later, I reflected on my relationship to stress. I couldn’t definitively pinpoint its role in my dad’s death at 73, but decades of a high-pressure lifestyle certainly hadn’t helped him. My self-assessment did not reveal an entirely healthy picture. I traveled a hundred days per year, and even when I was home I didn’t take much time off. This was a battle rhythm I had set for myself, and for the most part it worked. But I was beginning to see it as something less than a badge of honor.

I had kept up with the growing mountain of research on the benefits of meditation, but I didn’t need to be convinced: this practice had pulled me out of a deep hole once before. So I began sitting for ten or fifteen minutes every morning when traveling. The effect was dramatic. Suddenly, it was easier to remain focused throughout a long day. Stray thoughts no longer stole my attention. I was less tired and cranky.

Meditation is not a tool to achieve an outcome; it is a practice of being present in life.

The next step was bringing this home and making it an everyday habit, regardless of whether I was flying across the country or just cleaning my house on a Saturday. As this became an ingrained part of my daily life, I once again noticed the patterns of my favorite distractions and delusions, but at this point they are like noisy neighbors who are a constant presence on my block.

When I sense that my inability to focus is driven by pent-up feelings, I have tried Pema Chödrön’s technique of staying in the moment while sitting with uncomfortable emotions: relax, soften, and open. It has proven both painful and powerful — a self-administered therapy session.

I resumed meditation practice three years ago with the goal of managing stress more effectively. Then I read this line from an article by Zen teacher Elihu Genmyo Smith that made me question my motive: “If we practice with an idea of gain, we’re on the wrong path.” At first, this struck me as inscrutable “zen speak,” but then it hit me. Meditation is not a tool to achieve an outcome; it is a practice of being present in life.

A practice comes with an implicit bargain: “use it or lose it.” Today, I choose to use it.

Matthew Kohut, co-author of Compelling People, has worked as a writer, teacher, and musician for twenty-five years.