As long as you think vulnerability is weakness, you’re going to be afraid. Mirabai Bush and Ram Dass on the kind of vulnerability that’s actually strength. From the November 2018 issue of Lion’s Roar magazine. 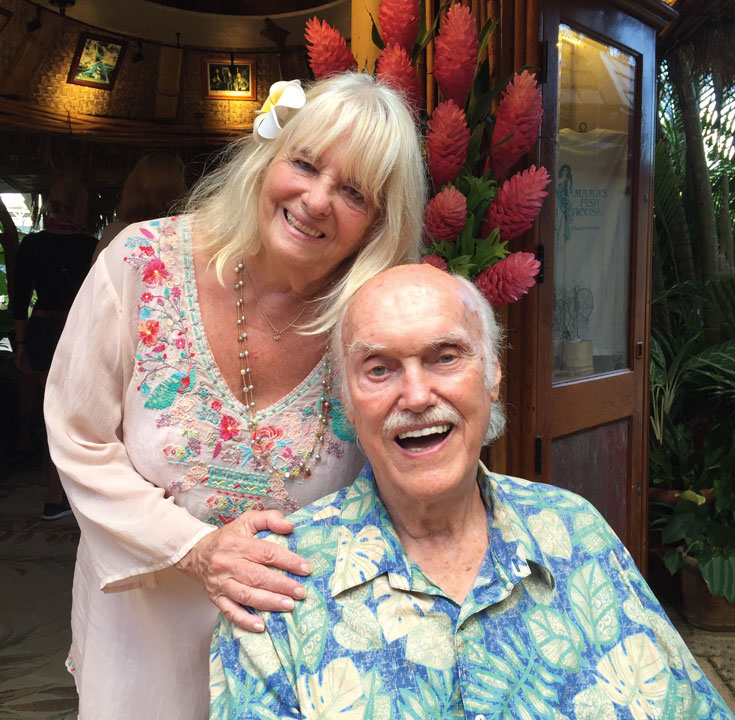 Bush and Ram Dass have been close friends and collaborators for decades. He is her son’s godfather. Photo by Kathleen Dassima Murphy.

In the afternoon, we meet over tea. Ram Dass says, “When I am afraid of something, I come up as close to it as possible, and I notice my resistance. I allow myself to just notice the resistance, because the resistance intensifies the fear—there’s no doubt about it. Get as close to the fear as you can, noticing the boundaries of it, just being with it, seeing it as it is. Don’t grab, don’t push it away, just notice.”

I remember that just after my mother had stopped smoking—which she had done for fifty years—she was diagnosed with lung cancer. Soon after that, she started smoking again. She figured she was dying, so she might as well enjoy her life. She hid it from the family, but of course we knew—we could smell the smoke. I tell this to Ram Dass.

“I was so distressed,” I say. “How could she do that? So I asked Stephen Levine, author of A Year to Live, what I should do. He said, ‘Buy a carton of Philip Morris and give it to her.”’

Ram Dass laughs. He gets it right away.

I say, “That was impossible for me. I could not do it. It was too horrible.”

There’s a kind of vulnerability that is actually strength and presence.

“Yes. By actually buying the cigarettes, I got closer to my fears and saw what they were. I saw my judgments and desire to control and my denial around her death.” I go on to say, “Krishna Das says that going on the Auschwitz retreats with Bernie Glassman helped him bring fear close. He sat there, just bearing witness to his fears of other people and difficult life situations, beginning to let go of judgments, being present with suffering and terrible horror.

“And the Buddha sent his monks to the charnel ground, where there were bodies everywhere in different states of decomposition: freshly dead bodies, decaying bodies, skeletons, and disembodied bones. He wanted them to bring their fear of death close and look at it. Getting close to what you fear takes courage.”

Ram Dass says, “Yes. You have to get close to the root of fear, which is ego identification, because as long as you think you are vulnerable, you are going to be afraid. We often think that vulnerability is a kind of weakness, but there’s a kind of vulnerability that is actually strength and presence.”

“I remember when my son Owen was born,” I say, “a tiny, totally vulnerable baby, and whenever he cried, all the adults who could hear him went to see what was the matter and tried to help. He was actually very powerful in his vulnerability.”

“What else helps with the fear?” I ask. Ram Dass is quiet. He seems to be drifting off. Then he says, “India. The burning ghats…” 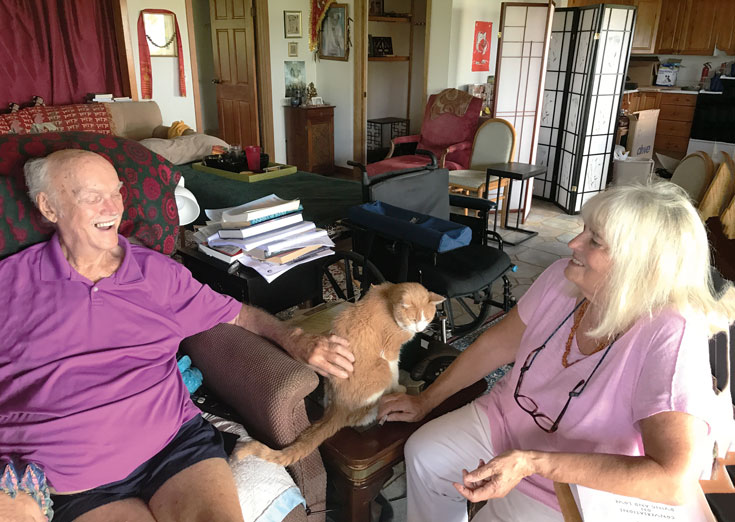 Mirabai Bush and spiritual icon Ram Dass at his home in Hawaii, where they had the conversations that became “Walking Each Other Home.” Photo by Kathleen Dassima Murphy.

Ram Dass has often said that the time he spent in India, especially Varanasi, changed his understanding of death and helped to rid him of his fear. Varanasi, also known as Benares and Kashi, is the spiritual capital of India for Hindus and one of the oldest continuously inhabited cities in the world. In 1897, Mark Twain, who also loved India, said of Varanasi, “Benares is older than history, older than tradition, older even than legend, and looks twice as old as all of them put together.”  Varanasi is the sacred city of Shiva, the god of transformation. Hindus believe that bathing in the Ganges River there remits sins and that dying there ensures release of a person’s soul from the cycle of its transmigrations: you will not be reborn again into this world of impermanence and suffering. Many Hindus go there to die.

Ram Dass says, “The first time I went to India, with David Padua, we stopped in Benares, and I walked the streets and saw people with sickness and disease, lepers, emaciated people with only one cloth wrapped around them squatting or lying in the street. It was shocking. I felt superiority, Western pity. ‘Why don’t they have hospitals? Why don’t they help these people?’ I couldn’t stand it. It was overwhelming. When I got back to the hotel, I actually hid under the bed. Then I met Maharaj-ji, and I began to understand differently. I returned to Benares alone, and I found that I was no longer the Westerner who had been so afraid. I understood that Hindus went to Benares to die, to release their souls. It was a great blessing for them to be there. I walked the streets, and I looked in people’s eyes and saw that they pitied me! They were secure in being in the right place at the right time, and I was a wandering ghost, not knowing where to go.”

“A wandering ghost, Ram Dass? Is that a cross between a wandering Jew and a hungry ghost?”

“Exactly!” He laughs. “I would spend nights on the burning ghats,” he continues, referring to the stone slab steps along the bank of the Ganges that are the sacred place where Hindus cremate the bodies of the dead in open fires. “The air is filled with prayers, chants, music, and incense. Sometimes there would be bodies burning around me in the dark, lit by the fires. I’d just spend the night there watching them turn to smoke. I could smell the charred flesh. I would watch as the eldest son of the dead person split the skull before the fire consumed the body. I felt like I could see Shiva put his hand out and take the person into his realm.

“India then was a place where death wasn’t in the closet. People didn’t seem to be frightened of it in the way that Westerners usually are. In the villages, people died at home with their extended families. They didn’t need a surrogate institution. When they died, they were wrapped in a sheet. The family would call a rickshaw, and they’d put the body on some sticks and wrap it, put it in the rickshaw, and take it to the burning ghats, right through the streets, chanting the name of God: Ram Nam Satya Hai [The name of Ram is truth]. Everybody, including children, would stop and notice. Death was right out in the open, a natural part of life. It wasn’t an error or a failure. It was part of life.”

Ram Dass looks out at the ocean as we sit in silence. A cruise ship glides by in the distance. He says, laughing, “Gambling and drinking and carrying on.”

“Almost time for us to carry on at dinner. That’s the closest we’ll get,” I say.

Born Richard Alpert, Ram Dass is the founder of the Love Serve Remember Project and co-founder of the Seva Foundation and the Prison Ashram Project. He is the author of the worldwide spiritual classic Be Here Now (Crown, 1971), and many other books. His most recent book is Polishing the Mirror: How to Live from Your Spiritual Heart (Sounds True, 2013/2014). Visit ramdass.org