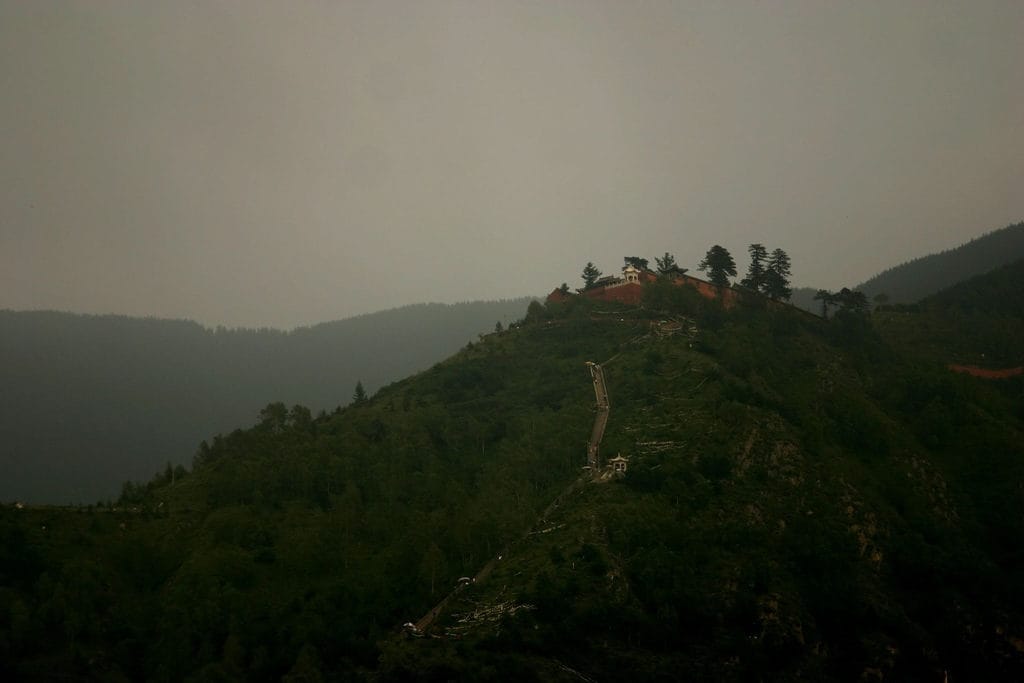 What has as much sublime magnitude and timeless reverence as the mountain? Mountains stand and witness the centuries as minutes, where we humans come into being and pass away, as if only in seconds. Generations upon generations of individuals look back over their shoulders and consider their accomplishments in its shadow. Yet, for the mountain, one’s heritage seems like a mere breath.

Nestled in Northeastern China, Mount Wutai has witnessed the building of Buddhist temples since the first century C.E. and it is home to some of China’s oldest existing wooden buildings. Some of which have stood since 900 C.E.

Consisting of five continuous mountains with flattened peaks, the Sacred Mountain’s altitudes rise between 2,500 and 3,000 meters above the sea. It is here, many believe, that the bodhisattva manifests himself; as a monk, a pilgrim, a wisp of cloud.

In Spain, on Friday, June 26, 2009, nearly two millennia of Buddhist history has convinced the UNESCO’s World Heritage Committee to name Wutai as a World Heritage Site, given that it is home to 68 temples, 150 towers, 146,000 sculptures.

But alas, it was not qualified to be a world natural landscape.

With the mountain’s designation as a heritage site, but not a landscape, let’s consider a mountain’s heritage.

The word “heritage” finds its roots in the Latin word heri meaning “yesterday.” When we say “our heritage,” we are saying, “we are the heirs, the receivers, of yesterday.” Why have I brought this up? The mountain had also applied for designation as both a cultural and natural heritage sites but was only approved as cultural from the UNESCO (United Nations Educational, Scientific and Cultural Organization). They ask, what does the mountain mean to heritage? And they respond, the mountain is a “catalogue of the way Buddhist architecture developed and influenced palace building in China over more than a millennium.”

So, this is heritage for the UNESCO; a catalogue of human achievements.

The Director of the Mount Wutai Administration Bureau, Liang Yousheng, says, “The success [of the mountain’s designation] is a new burden that will spur us to better protect the mountain.” What is being protected, what of the mountain, could a human protect?

They are protecting an ambiance.

“Mount Wutai has been harmoniously combined with Buddhist culture,” says Han Jianggen of the Wutai Mountain Buddhism Association, “reflecting the ancient Chinese philosophy of harmony between people and nature.”

Is it the mountain that needs protecting, or is it our understanding of heritage as embodied by the mountain? Let me explain with an example.

The Mount Wutai Administration Bureau had been criticized for the commercialization of Mount Wutai. They built many buildings to promote the site, and drew as many as 3,000 people a day. When the population began to greatly increase, it was felt that the mountain had become too urbanized and artificial. In 2006, many of the buildings came down, demolished to protect the mountain’s spiritual and Buddhist “atmosphere.”

But what are buildings to a mountain? There was a moment when “its” heritage and “our” heritage separated from each other. We see its heritage as sacred, fixed, and unscathed. We see our heritage as something that continues to form; it could never be as pristine. To protect the mountain’s heritage, we tore down our buildings to retreated back to “its” spiritual atmosphere. But can one truly return to one’s origin or is heritage something we create every time we consider it?

Now that Mount Wutai is a World Heritage Site, its atmosphere and ambiance will be more scrutinized, tweaked, and protected, frozen in time. But what is heritage when a Bureau constructs it, either by commercialization or in the attempt to restore it? Can we take a mountain out of time to protect it?

What is heritage to a mountain? It seems like a mere breath.