Pico Iyer thought he would find what is truly real by going off to a monastery, but he was really fleeing it. Dropping his spiritual romaticism, he found it in ordinary life. 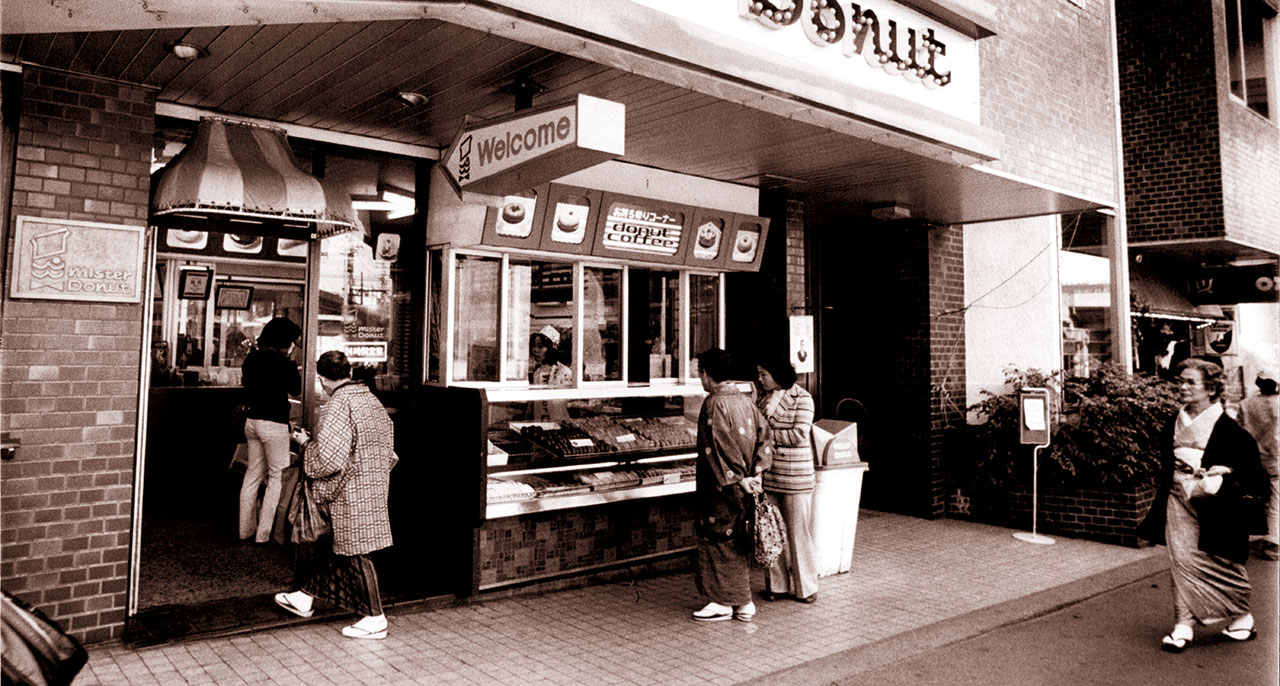 Pico Iyer found he could live the simple life he sought in a Japanese suburb amid fast food places like Mister Donut. Photo by Keystone Press / Alamy Stock Photo

Sometimes I ask myself why it’s so very hard to seek out real life. No, not just because of the ever more powerful screens that give us secondhand versions of life, like images on the walls of Plato’s Cave. And not just because fantasy is so much more fun. Not even because most of us have a surfeit of reality—those taxes, that leaking faucet, the unwanted neighbor hammering on our door. It’s more because we—or certainly I—have such a gift for putting romance in the place where realism should be.

At twenty-nine, living on Manhattan’s Park Avenue South and working from my twenty-fifth floor office in Rockefeller Center, I thought how wonderful it would be to move to a temple in Kyoto. It would give me everything I couldn’t get in New York and be the perfect counterpoint—my young mind imagined—to my life of speed and plenty and following the news. Raked-sand gardens, tatami mats, and the smell of incense. Haiku under the full moon as I sat on a wooden platform along the eastern hills.

The obvious lesson is that life has plans for us far wiser than the ones we devise,

I stepped out of Kyoto’s jostling train station the following year and took a taxi to a little place along the back streets. It was a sub-temple of one of Kyoto’s great centers of Buddhist activity—a Japanese priest in California had given me its name—which meant that it had bills to pay and property to keep up and chants to perform and mouths to feed. To my horror, it showed every sign of being a place in the everyday world, and not the one I’d fashioned in my head.

I left after a week, and only after many years came to see that the quiet, simple life I’d been seeking out could be found in the middle of the nondescript Japanese suburb where I live now, ringed by Mister Donut, the Golden Arches, and Colonel Sanders in a kimono. My search, it turned out, had been a good one—it just took time to see past the layers of romance and “Otherness” in which I’d draped it and realize that the apparent banality of a life might be its sovereign blessing. 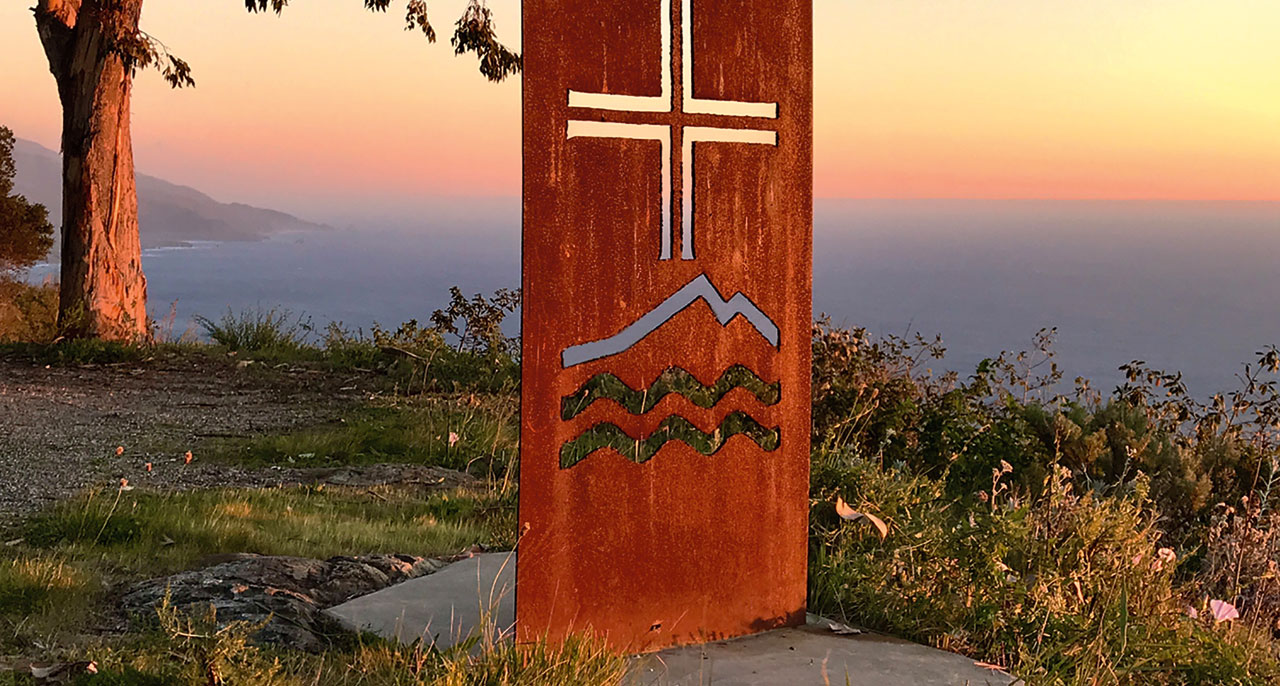 The entrance to New Camaldoli Hermitage in Big Sur, California, where Iyer regularly does retreats in a contemplative Catholic atmosphere. Photo by Rich Veum

Three years after I left that backstreet temple, back in California, a local friend told me about a place to go up the coast if what I wanted was the liberation of silence. That was just what I craved—until my friend told me the place in question was a Catholic hermitage called “Immaculate Heart” (now known as New Camaldoli Hermitage). I’d grown up in Anglican England, having to go to chapel at school every morning and again every evening. I’d had to sing hymns every day, I’d had to go through the Bible word for word (sometimes in Greek), I’d had to recite the Lord’s Prayer in Latin every Sunday evening. This was precisely the world I’d tried so hard to flee.

But I was sleeping on a friend’s floor at the time—my home had burned to the ground a few months earlier and I’d lost everything—so I figured that even a bed would be an improvement. As I arrived in my battered car near the retreat rooms, I noticed crosses everywhere. I stepped into my small room to be greeted by a Bible and a crucifix against the wall. This was like being taken back into the seeming prison of my boyhood.

Except it opened onto almost exactly the stillness I’d been dreaming of when I could see only Kyoto in my head. A ringing silence through the day that spoke not of absence but of presence. A view across twelve hundred feet of pampas grass, to the scintillant sea in every direction. No demands from the monks—I never saw them—and no need to go into the chapel (except that I did, when no one was there, and the sun streaming in through a Japanese-designed skylight could prove even more stirring than the moon I’d once dreamed of above the hills of Kyoto).

It still wasn’t real, of course, since I was only a visitor there. When, in years to come, I began to stay with the monks, within their “enclosure,” life was all movement and noise and responsibility. Not so very different, in fact, from the halls of Time magazine I’d abandoned to go to Kyoto.

Yes, the obvious lesson is that life has plans for us far wiser than the ones we devise, and that we don’t know what to look for till we find it. The places we dream of exist in a realm by definition quite far from our reality. The places we shun are often the places we know (too well, we think, though in truth it’s not well enough, or only through eyes blinded by prejudice).

In spite of all this, I’m sure I’m still captive to whatever illusions the travel brochures are eager to sell. My only, modest hope is that I’ll be aware that I’m deceiving myself at every turn, and that the only thing that will truly sustain me is the thing I haven’t painstakingly constructed in my head. Colonel Sanders and Mister Donut aren’t quite the teachers I loftily imagined when I was sitting in my office on Sixth Avenue, but that doesn’t mean they can’t sustain me. Indeed, the very fact they never existed in my head is probably what opens up some space for liberation.