The viral post was a hoax, but, says Richard Gere, the issue is very real. 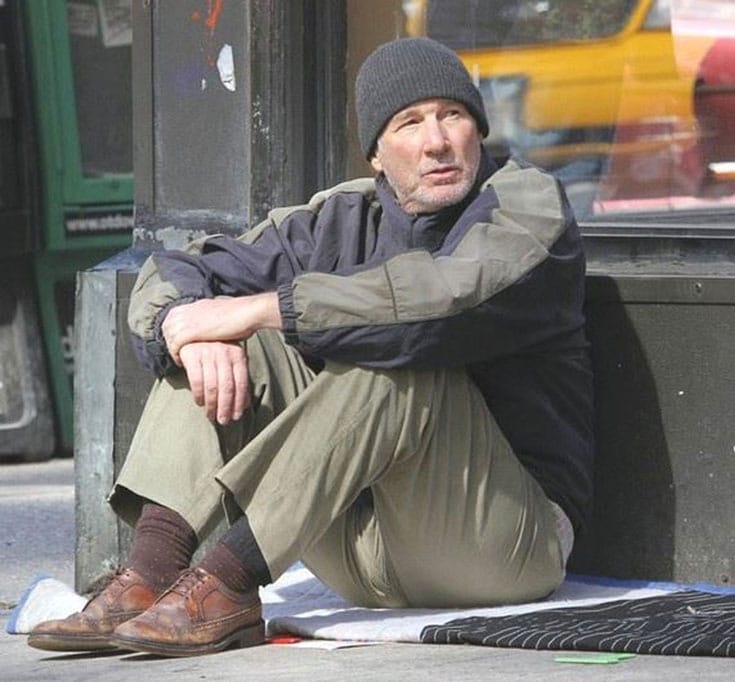 Earlier this month, a story about Richard Gere handing out $100 bills to homeless people went viral on Facebook. The post, accompanied by a photo of Gere dressed as a homeless person, included a long (and completely fabricated) quote by Gere about going undercover and learning what it’s like to be homeless. The photo was from the set of Gere’s new film, Time Out of Mind. On Wednesday, Gere posted a video to actress and Time Out of Mind co-star Jena Malone’s Facebook page to debunk the viral story.

“It was not me. It was not my words. In fact I think it was Gandhi’s words, included in there, and I’m not Gandhi, believe me. There was no mention of the movie.”

But, Gere continued, the sentiment made the story “partly true.”

“I was playing this character. But I wasn’t undercover. Yes, I am moved by this. Do I wanna do something about it? Yeah, I do. And I’m trying to figure out what to do, and make it skillful in terms of the use of my energy and the energy of social services, to make it meaningful. It says I started giving out hundred dollar bills. Well, of course I didn’t have a roll of hundred dollars bills and start passing them out. But I feel strongly about giving something to everyone I see. And we can all afford something to give, with a good attitude, and not make it any judgment. Just the ability to give, to be generous, is probably the most important thing for a human being.”

In fact, Gere didn’t post the video for the sole purpose of debunking the viral story. Gere was inspired by the false story to start a conversation about the larger issues of homelessness, suffering, and selfishness. He starts by saying:

“I wonder if there’s something we have in common and we could work together on, that could create a community of responsibility. I would love to engage as many of you who would want to on this issue: How do we get out of our shells and see other people completely as our brothers and sisters, as ourselves, within the universe of care and concern that we have? That’s the only way we’re gonna transform our experience in this world, transform our communities, the country, the planet, the universe, is on this level. There is something about the posting of the photograph of me as a homeless person that stimulated this thought inside of me, and a lot of you.”

Without mentioning Buddhism (Gere is a Buddhist and a student of the Dalai Lama, and earlier this week he accepted the Liberty Medal on His Holiness’ behalf) Gere discusses the Buddhist concepts of self and liberation:

“I was very fortunate, just two days ago, to accept the Liberty Medal for His Holiness the Dalai Lama, in Philadelphia. This is a big deal in America. I find myself thinking about this word, ‘Liberty’ — the Liberty Medal. There’s the Liberty Bell, the Constitution, the Bill of Rights. Liberty. But liberation is on a different level, too, which is even more primal than that. More visceral, and more important, is this sense of being liberated from selfishness.”

Watch the whole video below, and read our classic profile of Richard Gere, “My Journey as a Buddhist.”

Hi, Richard and Oren here,
We are so sorry for the delay, we ran into a technical difficulty. This was a first for us. We were so happy to speak with you today. Thank you for your heartfelt questions, we look forward to continuing the conversation in an interactive way. Thank you Jena for letting us borrow your page to host this important dialogue.