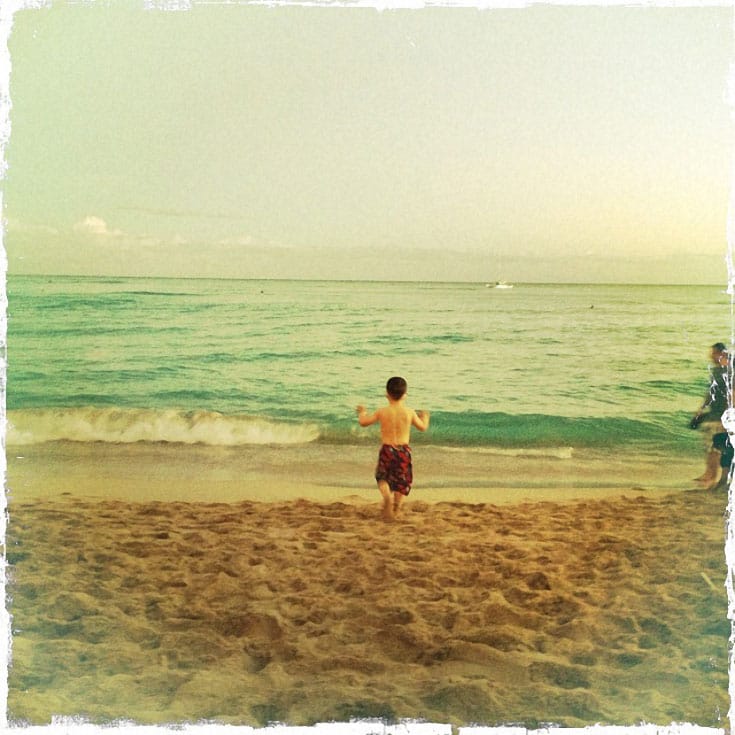 As we moved from Japan to Nova Scotia, we found ourselves in Hawaii, a place that, as unreal as it feels to me, is a world entirely without category for our kids. It’s a magical station between realities where everyone speaks English, but you’re almost as likely to hear Japanese — a world where our kids, for the first time, had no secret language.

But the encounter we’ll remember from those two days is not one that could be measured in words. Already, after a month of settling into our new lives, I’d be hard pressed to offer much detail about that time in Honolulu. But I will not forget when Boy met the ocean.

Boy stood on the beach, eyes wide, frozen like an animal discovered. There was a pause. Then he charged. He ran to the water as a wave came in and slapped him in the face, knocking him down. I ran after him, arriving in time to see him stand up, sputtering, arms extended in front of him, and shout, “Come on waves! I WILL FIGHT YOU!” And then, for good measure, “And I will WIN!”

We stood there in the surf, Boy challenging the water and getting knocked down by it, and me just trying to keep him alive. We did this for hours, until it was dark and we looked out across the horizon and saw that on all of Waikiki Beach, we were the only ones still there. Boy did not get tired. He did not give up. He was, without any doubt, the most intensely happy he has ever been. In the end, I had to pick him up and carry him back to the hotel, him sobbing at being torn away from this beloved adversary.

As much as a four-year-old can, I think that Boy, in those hours in the ocean, knew who he was. And who he was was someone who can stand before the full force and scale of the Pacific Ocean and not be humbled. He saw a worthy adversary. A fair fight.

It’s not that he didn’t know it was dangerous. He did, and for the most part, I didn’t need to tell him not to go in too deep. And he knew the ocean was beating him up; he knew it would continue. But in spite of all the evidence to the contrary, when faced with the immensity of the ocean, he chose to insist that he could match it. He was defiant.

This is the mind of vow. In all its glory and impotence and absurdity, this is what vowing looks like.

In the Zen world, we have four basic vows:

Many of us say these every day, but what do we mean when we do? I can’t count how many times I’ve heard people—beginners and teachers alike—point out that well, yes, we do take on these vows, and yes, that’s very meaningful, but of course we understand that it’s impossible to fulfill them. We know we can’t free all beings. We’re not stupid.

But that’s a mistake. That kind of vow is not a vow—it’s a performance. It’s a lie. For it to be a vow, we have to promise with our whole body and mind to see it through. That’s all. Don’t tack on, “…though I know I really can’t.” And don’t do philosophical acrobatics to redefine “free” and “embody” and “inexhaustible” so that they are now achievable, measurable. We can waste our lives in that way, telling ourselves a story about what we’re doing instead of doing it.

We vow, when our children are born, to protect them from harm. And we fail. We fail so, so many times that we can feel crushed by our incompetence. But those failures are a separate conversation from vow, because in this moment, our children still need protecting. They need that vow. And they need it again in this moment, and in this one. We don’t have the luxury of stopping to evaluate whether it’s really possible or not, because we don’t have the luxury of deciding it can’t be done. There is no compromise to be made. There is no way out of this promise.

I have misunderstood this point many times. I have gotten stuck in my story of how I have failed to be the husband I want to be, the friend I want to be, the priest I want to be. I have searched around for excuses, wallowed in the complexity of it all, stepped away from vow and into despondency over my own apparent inability to meet my own ideals. But being a husband doesn’t pause for me to think about it. Neither does being a friend, or a priest, or a son, or a father. I can only dive in. That’s the best I can do.

All of this is what washes over me as I stand battered by waves, laughing and staring at this little boy with his wild eyes and round belly and Finding Nemo swimsuit, so alive, shouting in the dark for the full force of the natural world to bring it on. I watch him get knocked down over and over again—he’s knocked down every time. He can’t win. Anyone can see that. But he also can’t lose. He shouts without looking at me, “I’m winning Papa!” And I want to grab him and look in his eyes and say, Keep that. If you keep nothing else, keep that.

This post was originally published as “Nothing Withheld” at continousmistake.com. It is republished with permission.