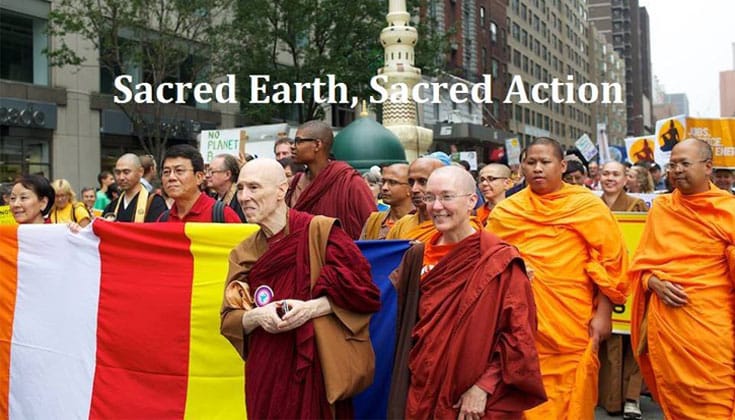 One Earth Sangha has been working with Buddhist communities to organize a Buddhist presence at April 29’s People’s Climate Mobilization in Washington, DC and at its sister marches around the world, as part of their “Month of Deepening Our Engagement Practice.”

To kick off their actions, One Earth Sangha held a live webinar on April 2 titled “Committing Ourselves to the Path of Engagement,” which featured Soto Zen priest Hozan Alan Senauke discussing “what it means to walk the Bodhisattva Path in these times.” (A recording of the webinar can now be watched online.)

The group has been working with the Buddhist Climate Action Network (BCAN), Earth Holders Sangha, and Buddhist Global Relief, as well as community members from Shambhala, Insight, Zen, Soka Gakkai, and other traditions to help Buddhists connect to sister marches and support the organizing of local sanghas, such as the San Francisco Zen Center, to join those gatherings.

Information about how to join One Earth Sangha for the People’s Climate March in Washington, and other ways you can get involved, can be found on their main organizing page, or on the event’s Facebook page.

“Together we can bring the gifts of mindfulness and the Dharma and join with others in calling for the dignity and freedom of all beings, near and far, born and yet to be born,” they write.