Andrea Miller visits the ancient artistic wonder known as the Ajanta Caves. As an inscription inside says, it’s best to attain nirvana, but second best is living in beauty. 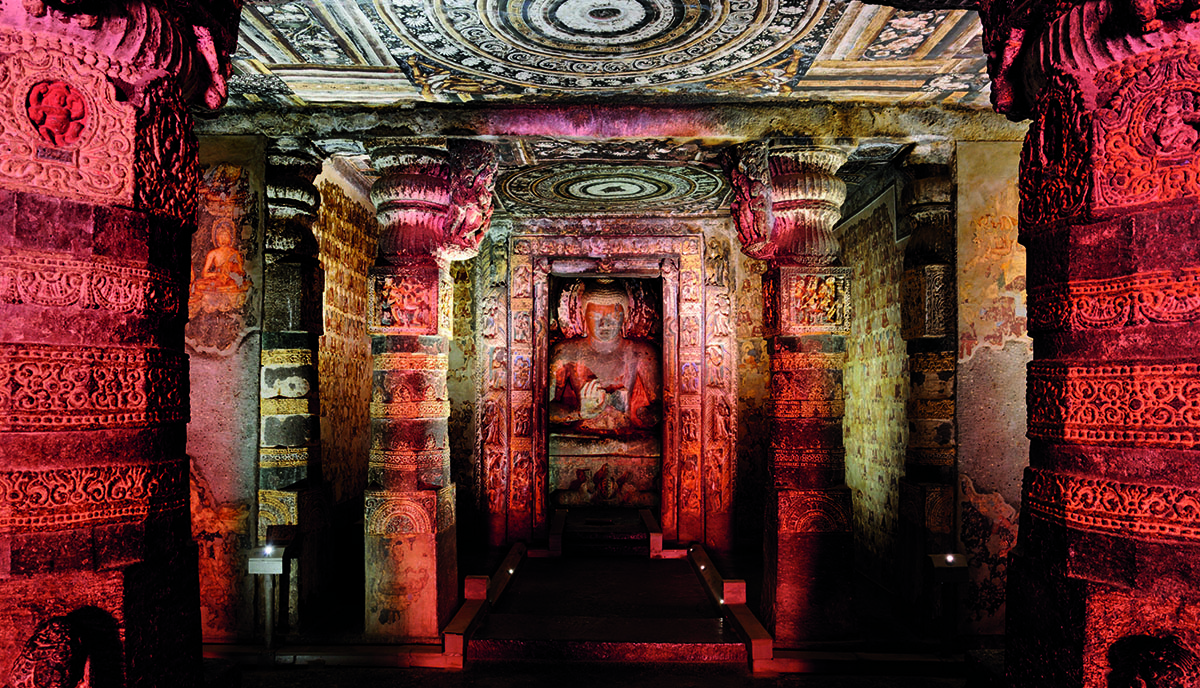 The Ajanta Caves in Maharashtra, India, are thirty-one humanmade caves, dating from the second century BCE to the fifth century CE. For more than a thousand years they were all but forgotten. Photo by Nikreates / Alamy Stock Photo.

Before entering the Ajanta Caves, I put coverings over my shoes, which look like blue shower caps. That’s so tourists like me don’t damage the ancient art and architecture of this unique Buddhist monastery and UNESCO World Heritage Site. For a moment I just stand outside dumbly in my coverings, under the white-hot sun, and try to take in the marvel of this horseshoe-shaped ravine.

The Ajanta Caves, located in the Indian state of Maharashtra, were not formed by nature. Gouged out of the cliff face by hand, the thirty-one caves in the complex are arranged in a pleasingly uniform curved line, their mouths embellished with pillars and sculptures of buddhas and elephants. Since this is the rainy season, the floor of the ravine and the top of the cliff are lush with greenery, and these two emerald borders serve to highlight the carved brown stone.

The Ajanta Caves are built into the rock face of a horseshoe-shaped ravine. Monkeys, tropical birds, and other creatures make their home in the surrounding jungle. Photo by Freakyyash.

I finally tear myself away from the exterior view and begin weaving my way in and out of the individual caves. They’re rich with Buddhist sculpture and extensive murals, many depicting scenes from the Jataka Tales, the traditional stories of the Buddha’s previous incarnations. These murals, I learn, are some of the finest—and only—examples of early Indian painting still in existence, making them extremely significant from an art history perspective.

For Buddhists, though, the Ajanta Caves are more than an archeological artifact: they’re a meaningful pilgrimage site. In their construction, the caves offer a glimpse into how the dharma was expressed in different times and, by extension, they can give us a fresh perspective on how it’s expressed in our lives today.

The Ajanta Caves were created in two phases. The earlier caves, known as the Hinayana Caves, were excavated from the first century BCE to the first century CE. In this period, the Buddha wasn’t represented in human form but rather through symbols, such as the wheel, footprints, and stupas. Two of the Hinayana caves are chaityas, prayer halls, while the other four are viharas—monasteries for monks to live in. Though the walls and ceilings of all six Hinayana Caves were once completely painted, only bits and pieces of the murals are still intact. 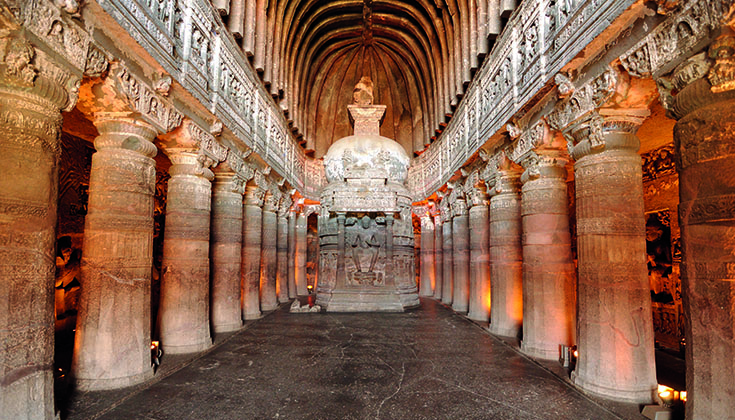 The ribbed roof of this cave, a prayer hall, was meant to mimic the architecture of wooden structures. Photo by Dey Sandip.

For four hundred years, there was no further excavation at Ajanta, and during that lull the prevailing view of Buddhism shifted. So, when there was another burst of creative activity in the fifth and sixth centuries CE, the new caves, called the Mahayana Caves—were remarkably different from the earlier ones. Specifically, in the two chaityas and various viharas of the Mahayana Caves, the Buddha is shown in human form, making various mudras, or ritual gestures.

The Buddha statues, many of them larger than life, are carved directly into the rock face, and I take a few minutes to stand in front of them and follow my breath. Then I turn my attention to the Mahayana murals. They’re in much better condition than those in the earlier caves, so I can appreciate how exquisitely evocative and elaborate they are. The way the figures cast their eyes and curl their lips is so highly expressive and individual that whole stories unfold. The imagery includes mythical beasts, princely processions, and ascetics in monasteries. Nothing, it seems, is left out, not even the detail of ants on a tree.

According to Richard Cohen, associate professor emeritus of South Asian religious literatures at the University of California, San Diego, the opulent artistic beauty of the caves was in keeping with the views of early Indian Buddhists. A scripture of the Mulasarvastivada, a Buddhist sect associated with Ajanta, “talks about the importance of creating beauty in this world and of having a beautiful monastery,” says Cohen. Inscribed into the rock at Ajanta, there’s a verse by a monk claiming that it’s better to be in nirvana and free of this world, but if you are going to be in this world, you might as well be in a place of beauty. Ajanta, Cohen says, reminds us that “beauty is a Buddhist value.”

The caves were “discovered” by a British hunting party in 1819. They were pursuing a tiger when, it seemed to them, the animal vanished, as if by magic, through solid rock. Scaling the rock face, the party was amazed to find that vines were hiding a sophisticated portico. They lit a torch of burning grass and pushed their way inside. Clearly, this space had been used by predators for centuries; there was a human skeleton and a jumble of refuse on the floor. While the other men clutched their muskets, Captain John Smith used his hunting knife to carve his name into the statue of a bodhisattva. My guide, a local named Rajesh Raut, shows me the now two-hundred-year-old graffiti. 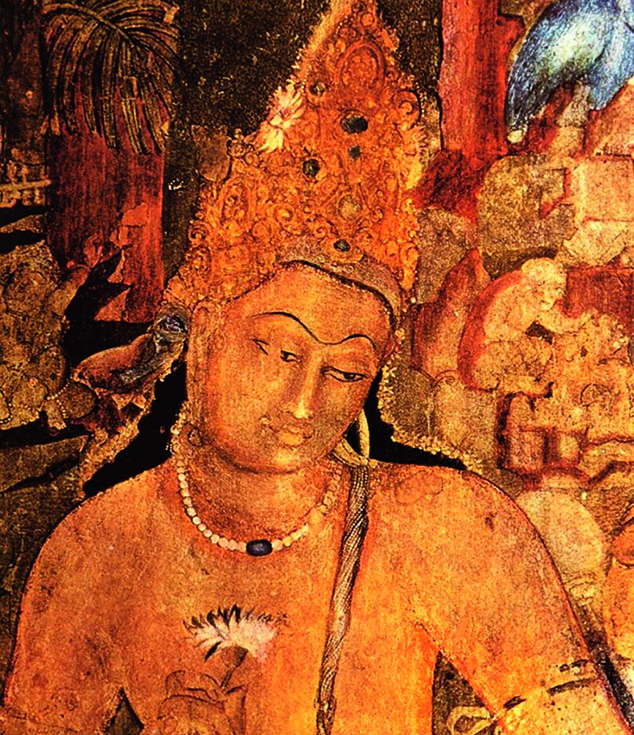 In this famed painting of the bodhisattva Padmapani, the material and spiritual meet. The richness of his ornate crown and necklace contrasts with his meditative, compassionate gaze. Hugh Honour y John Fleming: Historia mundial del arte, Ed. Akal, Madrid, 2002, ISBN 84-460-2092-0 via Public Domain.

Raut has been talking to me and others about the history and fine art of Ajanta. But he also has a relationship with the caves that goes beyond the encyclopedic facts. In the early nineties, explains Raut, he was going through a difficult time and looking for relief. At the suggestion of a friend, he began meditating in some lesser known caves not far from Ajanta and, in time, he found his mental state positively transformed. Attributing the improvement to his cave practice, Raut was inspired to study and become a guide at Ajanta.

“For others, it’s a profession, like someone is a car driver or an engineer,” he says. “But not for me.” The caves have touched Raut deeply.

For millennia, caves have been regarded as sacred in India, and because it was seen as immaterial if the caves were natural or manmade, people began creating rock-cut architecture. The earliest such caves remaining seem to be the Barabar Caves in Bihar, which date back to the third century BCE and were created under the auspices of the famed Buddhist king Ashoka. Today, India boasts more than 1,500 ancient and medieval rock-cut temples, and the vast majority of them aren’t on the tourist circuit. The crowds make it difficult to meditate in Ajanta and other well-known caves, but if you’re willing to make the often arduous trek to their lesser known counterparts, you’re welcome to sit in them and meditate, just like the Buddha is said to have meditated in the naturally occurring Indrasala Cave.

Shantum Seth, a Buddhist teacher in Thich Nhat Hanh’s Plum Village tradition as well as a guide with his tour company Buddhapath, has for many years taken groups of people to practice in rock-cut caves in India. When I ask him why, he says that we bring these places back to life when we use them as they were originally intended. And, he adds, “I love caves. I like sitting under a tree, but trees are more distractive. A cave gives you a strong sense of being in a womb. When you come out, you see the light, and it’s like you’re making a new birth. It’s much easier to go within when you’re in a cave.” 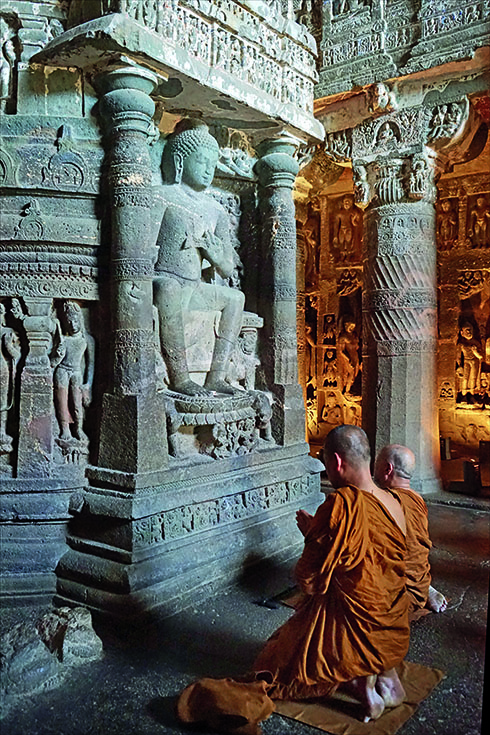 According to pilgrimage guided Shantum Seth, we bring these cave temples back to life when we use them as they were originally intended: for practice and study. Photo by Jean-Pierre Dalbera.

The kind of affinity with caves that Seth is talking about is not limited to Buddhists, and indeed not all rock-cut caves in India have Buddhist connections. Hindus and Jains also made extensive use of such caves, and some, such as the celebrated Ellora Caves, which are just sixty miles from Ajanta, contain Hindu, Jain, and Buddhist monuments. Today in the West we tend to put Buddhism in its own little box, separate, for example, from Hinduism. Yet for the people of ancient and medieval India, spirituality was generally something much more fluid. Case in point, the construction of the Ajanta Caves was funded by wealthy rulers who could perhaps best be described as Hindus with Buddhist leanings.

But the big question for me is why would anyone—Hindu or Buddhist—be motivated to finance the Ajanta Caves? While the construction clearly required an enormous amount of resources, the caves are, even today, remote and rather onerous to get to. If you’re going to build something so grand, why not do so in a city, or at least near a city, where more people will presumably see it? According to Richard Cohen, the motivation was both spiritual and political.

Although the horseshoe-shaped ravine of Ajanta is secluded, it was on a north–south trade and pilgrimage route. “So,” says Cohen, “it was not on top of a mountain where nobody would come unless they were going just to sit in a cave for three years.” The intention was that traders and pilgrims from all around would pass through and be amazed by what this reigning king and his court had accomplished. The message, Cohen continues, was that “they were good people, they were holy people, and they were powerful people.” In other words, the builders of the Ajanta Caves were not to be messed with.

Merit making was another motivation for patronizing Ajanta. In all likelihood, the same rulers who paid for Ajanta were also responsible for urban monasteries that were equally stunning, if not more so. But being made of wood, those constructions have not survived to the present day. Building into the rock of the mountain ensured longevity. Because merit was believed to be accrued for patrons every time someone made use of their gift, endless use meant endless merit, says Cohen.

In one patron’s ancient inscription, Ajanta is described as “a memorial on the mountain that will endure for as long as the moon and the sun continue.” And while that strikes me as a bit ambitious, I am moved that—so many centuries later—the Ajanta Caves are still awing pilgrims like me.

By the time I finish exploring, one of my shoe coverings has torn. I slip the other one off, and then—trying to avoid the many cheeky monkeys—I head back to my tour bus.