Brian Lesage reflects on how we can honor past and future generations of Buddhist practitioners by bringing the spirit of offering into our everyday practice. 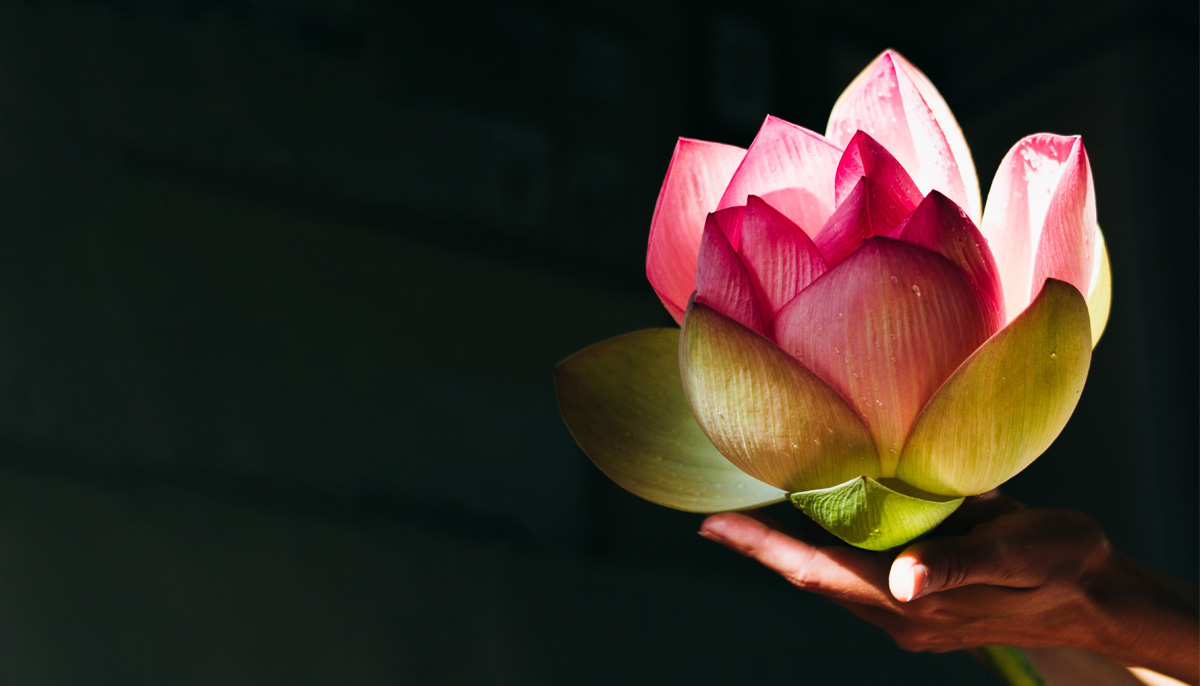 Recently, I became curious about what it would have been like to practice the dharma in the early days of the tradition.

In those days, a significant aspect of the dharma path was preservation and transmission of the Buddha’s direct teachings. Practitioners who took on this work were most likely monastics. In the first 500 years following the Buddha’s death, the teachings were transmitted orally. This meant that practitioners memorized the Buddha’s spoken instructions, reflections, stories, and conversations, and then recited and chanted them. A next generation of practitioners heard these remembered versions of the teachings, memorized them, and in turn passed them along to following generations, who did the same, at once creating and preserving the tradition.

How vast the path is — so much larger than my own short life.

Following the first 500 years of oral transmission, preservation of the teachings via written recording also became a practice. In many places, this became a standardized process, as strictly maintained as memorizing, reciting, and chanting. In Sri Lanka, for example, the teachings were written in Pali, one of the early scriptural languages of Buddhism. Monks gathered leaves of the ola palm, dried them, and cured them in a manner that made it possible to etch the teachings into them with knives. Once the leaves were etched, the monks stained them and then dried them again, in order both to make the text more legible and preserve the leaves.

Yet even after this painstaking process, the ola palm leaves would not survive long in Sri Lanka’s tropical climate — possibly for no longer than six months or a year or two. As a result, the process would be repeated almost immediately — and of course there were many teachings to record. Thus, even as the written record came into being, memorization also continued, as a kind of insurance. Memorizing and writing the texts were carried on right alongside meditating, ethical conduct, and the practice of generosity, compassion, and kindness. When first taking this in, I wondered what would have been the inclinations in such practitioners’ hearts? How did the oral and written practices of transmission inform their notions of what it means to practice the dharma?

Imagine the spirit of the impulse behind such a practice. What would it feel like to have that as a significant part of one’s path and practice, along with the practices that we explore as contemporary practitioners?

Had I been a monk etching palm leaves with teachings I knew by heart and recited and chanted every day of my life, would I have imagined that I was making an offering to a vast multitude of future practitioners? Would I have held that in my heart and been sustained by it in every action I took? And this is a sense not only of future practitioners. To make such an offering, must I not also have in my heart the memory of all the practitioners who over generations have made the offering to me?

From this perspective, how vast the path is, so much larger than my own short life. More than an ancient tradition intertwined with a distant past, it is also in service of uncountable future generations.

Now I wondered, what would it be like, as a practitioner in my time and place, to practice compassion or kindness from day to day with this vast sense of offering? What might I experience if I got up every morning and meditated with it on my cushion? What would it do to me, to intertwine that immensely broad sense of offering with my daily routines? What would occur in my practice, if I stepped with it into this vast web, so much larger than myself alone?

These questions became more compelling when I encountered another story like that of the Sri Lankan palm leaf practice, one that also evoked in me the vast sense of offering. About 2000 years ago, in an area called Gandhara — now an area of eastern Afghanistan and northwestern Pakistan — a group of practitioners etched some early Buddhist texts onto birchbark scrolls and placed them into clay pots. In 1994, these pots turned up in an antiquities market in Peshawar and were passed into the hands of scholars. Not only have they informed our intellectual understanding of Buddhism, but they have also provided further historical context for Buddhist practice. These fragile clay pots, filled with even more fragile birchbark etchings — this nearly miraculous discovery — are the material evidence of minds and hearts filled with a vast compassion and generosity, grounded in the practice of transmission.

Imagining those Gandharan practitioners evokes in my heart a more practical question of my practice. What do I want to offer to this world for future generations? What message-in-a-bottle do I want to send along, however fragile it may be? Or, what actions might I or any of us in our Buddhist communities offer now to be carried forward? Maybe it can be as simple as offering a child a safe place to sleep tonight or preparing a meal for a friend or family member. Maybe it could be letting another driver merge in a traffic jam. Or maybe we could try something a little more difficult, such as finding the courage to speak out about social injustices or keeping silent when words can only make a situation worse.

What will we place for the future in our clay pots, fully aware that most of those messages will be lost, disintegrated long before they might have reached the heart of another? I am exploring the possibility of engaging with this spirit of offering in my everyday practice. What will that feel like? I came to the dharma as the result of many conditions, one of the most potent and primary of which was that life was difficult for me. I was having a hard time and practice was all about my life and improving it.

There was nothing wrong with that. Yet now that I have learned a little about easing my own troubles, I am ready to open to a broader sense of practice. This is an important reflection — not only for me but for anyone seeking to deepen their practice or to become more balanced — in part because of how mindfulness in our modern era can get situated.

Our dharma paths are often reduced to one practice of mindfulness, which is then viewed in very narrow terms. We meditate and develop concentration to address our anxiety or depression, or to free ourselves from our worrying minds. Then meditation becomes just one more aspect of our daily health regimens. A person gets some exercise, brushes their teeth, remembers to floss, eat their vegetables, and yes, meditates. What happens? They have a healthy body and mind. That’s great? And to be perfectly clear, I am down with this way of thinking. I do all these things in my daily life.

And yet if this is all there is to my life, well, that feels quite narrow. So, I ask the question: Is this a worthwhile life? I’m born. I brush my teeth. I don’t get cavities, and then I die.

In these simplest moments of awareness, I etch the dharma onto the bark and preserve it for future generations.

But it feels very different for me when I expand the sense of what it means to practice. I feel as if I am entering into the vastness of the dharma when I imagine my meditation in this moment as etching one of those palm leaves or birchbark scrolls: fragile, ephemeral, and almost certain to be lost — and yet such a powerful gift in honor of past and future generations. So, yes, we can meditate to reduce our worries and to improve our life. And, at the same time, we can practice with the spirit of offering, acknowledging what we have received from past generations.

It is also important to affirm that our mostly secular modern Insight Meditation tradition arose from this spirit. In the late nineteenth century, there was a huge surge of lay practitioners in Myanmar and what is now Sri Lanka. People in those places began to engage in meditation and other dharma activities that were usually reserved for monastics. They studied and went on retreat, and in general they became much more involved in local Buddhist traditions.

The spirit of this movement was different from most modern, Western practices of Insight Meditation. At that time, there was concern for how colonization was demolishing the cultures of these countries and their practice of Buddhism. Lay practice was a way of fighting colonization. Its intention could be articulated as, “When I practice, I am enabling the survival of Buddhism for future generations. In this way, I honor past generations of practitioners who offered this gift to me.”

This seems straightforward, but it is also true that during this time, Buddhism’s relationship to colonization and colonized ways of thinking was troubled and complicated. But nevertheless, the surge in lay practice was, at least in part, in the same spirit of connecting with and honoring past and future generations as the practice of memorizing the Buddha’s teachings and, over and over again, etching them onto palm leaves.

The meaning of the offering is the same when it is we who bring its spirit to our practices, even on days when our lives feel like complete disasters. We might be struggling with financial or employment problems, or with health issues, or facing challenges within family relationships or friendships. But we are always able to salvage moments of practice or mindfulness, to place them into our metaphorical clay pots, honoring past practitioners and helping to preserve the path for future generations. In and of itself this offering has power to uplift our hearts in the midst of most hardships.

This is something to remember in odd moments. I might be rescuing a spider trapped in a bathtub, pausing at a traffic light and reconnecting with my breath, or texting a friend who has suffered a loss. In these simplest moments of awareness, I etch the dharma onto the bark and preserve it for future generations. And when the dharma is moving through, suddenly there is so much less of me, and at the same time, the feeling that I am beginning to fully arrive into the vastness of the dharma.

Brian Lesage has practiced Buddhist meditation since 1988 and has taught meditation since 2000. He has studied in the Zen, Theravada and Tibetan schools of Buddhism. He was ordained in the Rinzai Zen tradition in 1996. His training in Vipassana Meditation includes doing extended meditation retreats in Myanmar (Burma), Nepal, and India as well as numerous retreats in the U.S.  He leads retreats and teaches meditation courses nationwide. You can also visit his website for more information at: liberatingawareness.com