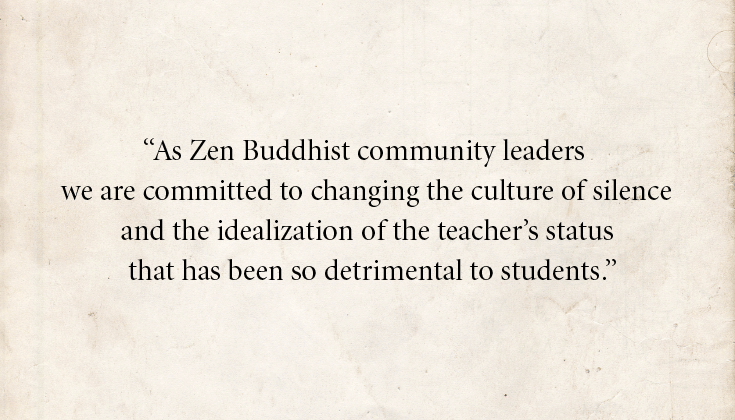 Following Buddhadharma‘s Winter 2014 cover story on abuse in Buddhist communities, 90 Zen teachers and community leaders have penned an open letter on the issue.

As Zen teachers, we would like to express our gratitude for Buddhadharma’s recent issue on abuse in Buddhist communities. We also appreciated Mr. Oppenheimer’s piece in The Atlantic for “The Zen Predator of the Upper East Side.” We are referring to the discussion and reports on the abuse of power and authority of Zen Teacher Eido Shimano and others. We believe exposing this problem is a positive step in the direction of preventing such abuses in the future. Many women and others in the Zen community have suffered as a result, and we regret and apologize for our collective failure to stop this harm. Thanks to Mr. Oppenheimer’s efforts, women have come forward, some even using their names; we think this kind of courage can only embolden other survivors of abuse to speak out.

We have pledged to look and listen to our communities and to build more visible ethics codes, working toward consensus on national standards on behavior and oversight, and seeking outside consultation to educate and empower students to come forward if they have been abused. Unlike either our Asian counterparts or American Judeo-Christian clergy, the American Zen tradition does not yet have a central authorizing body capable of sanctioning and removing a harmful teacher.

Even so, as Zen Buddhist community leaders we are committed to changing the culture of silence and the idealization of the teacher’s status that has been so detrimental to students. As Mr. Oppenheimer points out, scoundrels and sociopaths will always walk among us–sometimes as teachers and priests. While ethics and changes in the balance of power cannot completely halt these scoundrels, we are working steadily to make our communities more aware of these dangers as a way to prevent abuse. We view the revelations concerning Eido Shimano as a wake-up call to each of us to pay close attention to the safety of the members of our community, and to monitor our own behavior as well as that of others.

More on Confronting Abuse of Power: