Jessica Pimentel on what she’s learned from seeing life through the eyes of her character, Maria, on Orange Is the New Black. 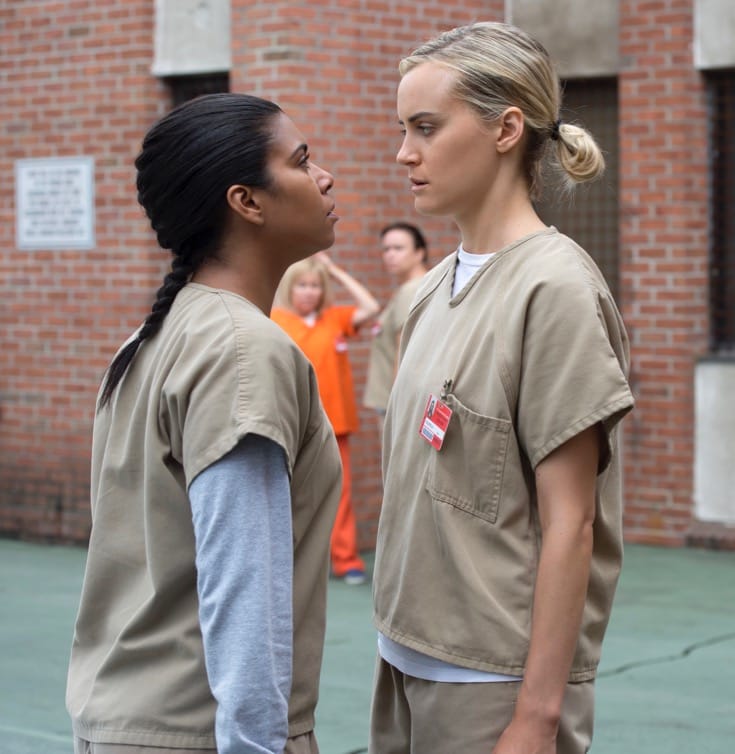 Jessica Pimentel as Maria Ruiz with Taylor Schilling as Piper Chapman on “Orange Is the New Black.” Photo via Netflix.

In Orange Is the New Black, you play a woman who gave birth in prison and was immediately separated from her baby. What is that like?

It’s extremely painful. I must have cried every day for the first two years. Your reality changes when you’re looking through someone else’s eyes. One Buddhist practice I do is generating compassion by putting myself in the place of another person, which is what we do as actors. Finding the compassion to play the role is important. As an actor, you’re taught to never judge your character. You’re just telling their story.

What have you learned from Maria?

A lot of people grasp at things outside themselves to give them hope, and that’s dangerous. Those things can get taken away or not work out. Holding on to ideas is sometimes more dangerous than dealing with what is.

Maria’s story recalls the Buddha’s analogy that a bodhisattva protects all living beings like a mother protects her child.

Absolutely. I feel exactly that. She never really gets involved in anything, but she watches everyone. She also does tough love—bodhisattva tough love. Giving it to people straight. Maria does go through some changes in season four, which I’m not at liberty to discuss yet. Season four is really heavy!

Is it true that you almost gave up acting to become a nun?

I considered it for a long time. I wasn’t sure what direction my career was going. I didn’t have a partner or family to look after. But a Buddhist teacher told me, “You’re really of more value to dharma and the world if you continue on your path as an actress and a musician. You come in a form people can relate to.”

***********SPOILER* #卐 卍卐 卍卐 卍 *SPOILER*卐 卍 卐 卍卐 卍卐 #卍 *****#SPOILERALERT. ******* "How ironic that the Buddhist will be branding a #swastika?" I thought it was perfect. In my eyes and in #Buddhism, it’s a symbol of teaching and basically, being a good person, good luck, peace, balance and turning the wheel of #Dharma (teaching). But unfortunately, through misconception and dirty minds, it has become something else. Also found in Native American artwork and spiritualism the 卐 or 卍 is an ancient religious symbol find throughout the world that generally is considered to be sacred and auspicious in Hinduism, Buddhism, and Jainism and dates back to before 10,000 BC. ? #RuthlessRuiz #swastika #dharma #buddhism

What made you want to be a nun?

I can’t say “cool outfits” [laughter]. When you’re at a certain point in your practice, you see how hard it is to walk the line between dharma and being in the real world. But I realize that being in the world is exactly dharma practice.

How did you come to Buddhism?

I was raised in a loving Christian home. In high school, I read a passage in a book about the chain of causation—you know, suffering breeds grasping. I wept! That was it, the whole answer to me.

How does your Buddhist practice impact your work?

It’s behind everything I do. I use acting as a practice. I’m telling a story that hopefully will touch someone’s heart. I’m also in a metal band, Alekhine’s Gun. Almost all our songs have dharma quotes in them.

There are so many reasons why people go to jail. If you give these people, who might have anger issues or depression, the tools to help quell the symptoms of mind, maybe that will improve their quality of life in prison. And maybe these tools can help them deal with whatever put them there.

What’s next for you, project-wise?

I love my music career. My band is working on a new album. I love Matrix–style genre films: action-adventure with spiritual meaning behind it. I would really enjoy working on something along those lines.

But do you still think about becoming a nun?

I do. When you have a strong practice, there’s something in you that wants the solitude of devoting life to dharma. It took me a long time to realize that you don’t have to go to that extreme. Especially with this platform I have now. I’m not going to get that if I’m in a cave somewhere.