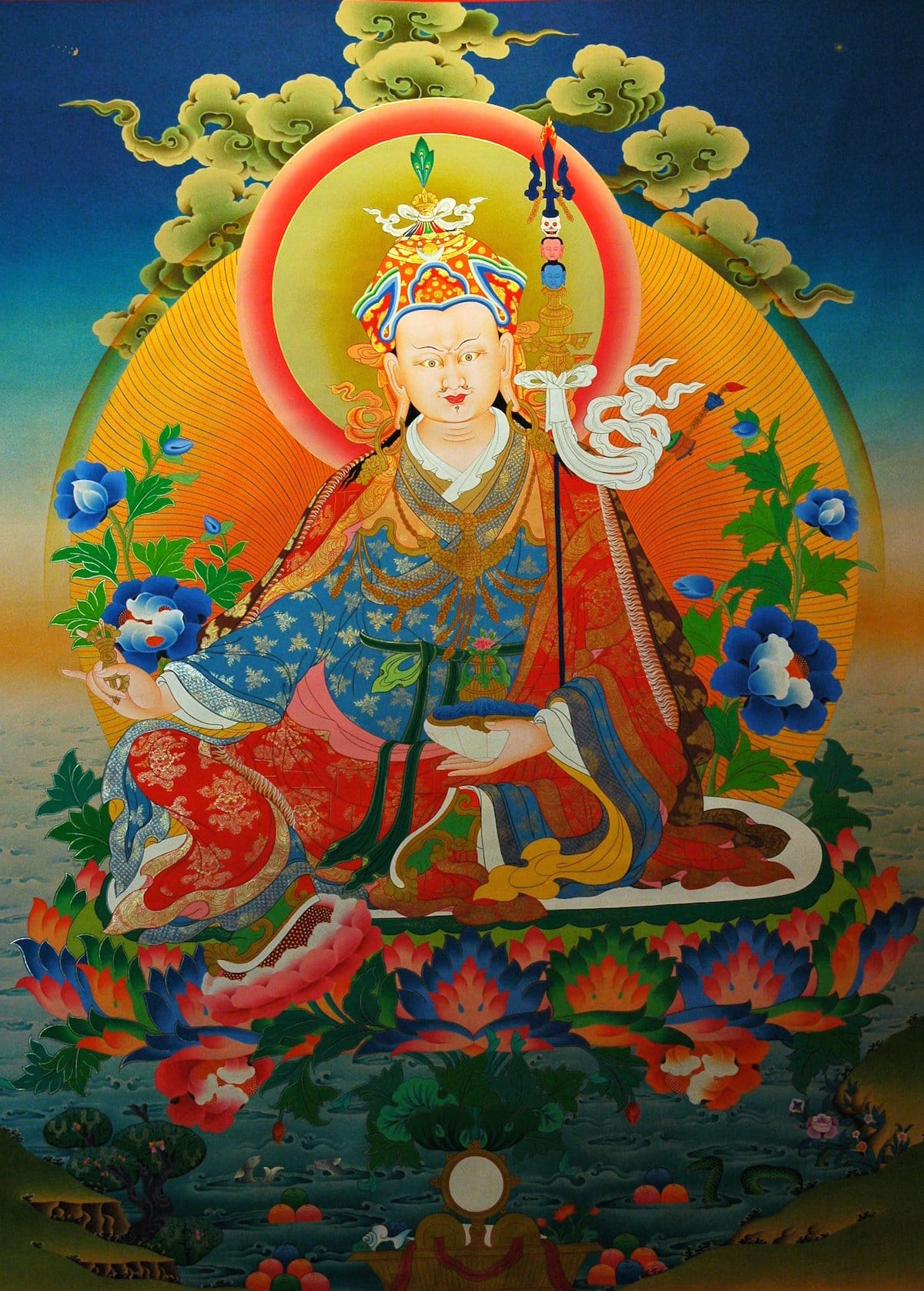 The master Padmasambhava was invited by King Trisong Detsen to tame the construction site and build Samye, the Glorious Spontaneously Perfected Fulfillment of Boundless Wishes.

later, when conducting the consecration, the king invited the master, dressed in a dark maroon cloak of brocade, to sit upon a throne of silken cushions in the upper central chamber. He served the master wine made from rice, and placed full goblets of both gold and silver at his right and left hands.

Well, you may then ask, “What is the difference between buddhas and sentient beings?” It is nothing other than realizing or not realizing mind. The substance of the awakened state, of buddha, is present within you, but you don’t recognize it. Not recognizing their minds, beings stray into the six streams of existence. You may then ask, “What is the way to realize mind?” For that, it is taught, you need the oral instructions of a master.

In this regard, “mind” is that which thinks and cognizes; there is indeed something that experiences. Don’t seek this mind outside, look within! Let mind search for itself! Reach certainty about how the nature of mind is!

At first, from where does mind arise? Right now, where does it stay? At the end, look into where it goes! When your mind looks into itself, it finds no place from where it arises, remains, or goes to. There is no explanation of “this is how it is.” “Mind” is discovered to be without something outside or inside. It does not have someone that looks; it is not the act of looking. It is experienced as a great original wakefulness without center or edge, an immense all-pervasiveness that is primordially empty and free. This original wakefulness is intrinsic and self-existing. It is not made right now, but is present within yourself from the very beginning. Decide firmly that the view is to recognize just that!

To “possess confidence” in this means to realize that like space, mind is spontaneously present from the beginning. Like the sun, it is free from any basis for the darkness of ignorance. Like a lotus flower, it is untainted by faults. Like gold, it doesn’t alter its own nature. Like the ocean, it is unmoving. Like a river, it is unceasing. Like Mount Sumeru, it is utterly unchanging. Once you realize that this is how it is [and stabilize it], that is called “possessing the view of realization.”

The king asked: What is meant by “possessing the experience of meditation”?

The master replied: Listen here, Your Majesty! To “possess the experience of meditation” means to leave your mind uncontrived, uncorrupted and fresh. Let your mind rest in its natural, unrestrained and free state. By neither placing your mind on something outside nor concentrating inwardly, you remain free of focus. Within this great equal state of your innate nature, let your mind stay unmoved, just like the flame of a butter lamp that is not moved by the wind.

Within this state, experiences can occur: your consciousness may become overflowing, bright, or stop altogether; blissful, radiant, or free of thoughts; it may feel murky, without reference point, and out of tune with the ways of this world. If these experiences occur, don’t attach any special importance to them, as they are just temporary experiences. Don’t cling to or fixate on them at all! That is called “possessing the experience of meditation.”

The king asked: What is meant by “possessing the equal taste of conduct”?

The master replied: “Conduct” here means to be uninterrupted in meditation; without being distracted, even though there is no thing being meditated upon. Like the ceaseless flow of a river, you remember throughout all situations, whether walking, moving about, lying down or sitting. “Equal taste” means to embrace whatever you see, or whichever of the five sense pleasures occur, with the recognition of your innate nature, free from attachment or clinging. You do not accept or reject anything at all, just like the analogy of arriving on an island of precious gold. This is called “possessing the equal taste of conduct.”

Again the king asked: What makes one “cross the dangerous defile of moving thoughts”?

The master answered: When conceptual thinking occurs while resting in meditation, whatever arises does so out of your own mind. Since mind does not consist of any concrete essence whatsoever, thinking is itself empty of any real entity. Like the analogy of a cloud that appears within space and vanishes again into space, thinking occurs within mind and dissolves again into mind. In nature, conceptual thinking is the innate dharmata.

“Crossing the dangerous defile” means that when mind moves into a variety of thoughts, you should direct your attention into this mind itself. Like a thief entering an empty house, empty thoughts cannot in any way harm an empty mind. That is called having “crossed the dangerous defile of moving thoughts.”

The king asked the master: How does one “gain the unchanging confidence of fruition”?

The master replied: Listen to this, Your Majesty! The awakened mind of bodhicitta is not created through causes nor destroyed through circumstances. It is not made by ingenious buddhas nor manufactured by clever sentient beings. It is originally present in you as your natural possession. When you recognize it through your master’s oral instructions, since mind is the forefather of the buddhas, it is like the analogy of recognizing someone you already know.

All the buddhas of the three times awaken to enlightenment in the continuity of actualizing this after attaining stability, just like the analogy of a prince ascending to the throne. To awaken to what is spontaneously present from the beginning, free from fear and intimidation, is called “possessing the confidence of fruition.”

From Advice From the Lotus Born, by Padmasambhava, translated by Erik Pema Kunsang. From Rangjung Yeshe Publications in September, 1994.