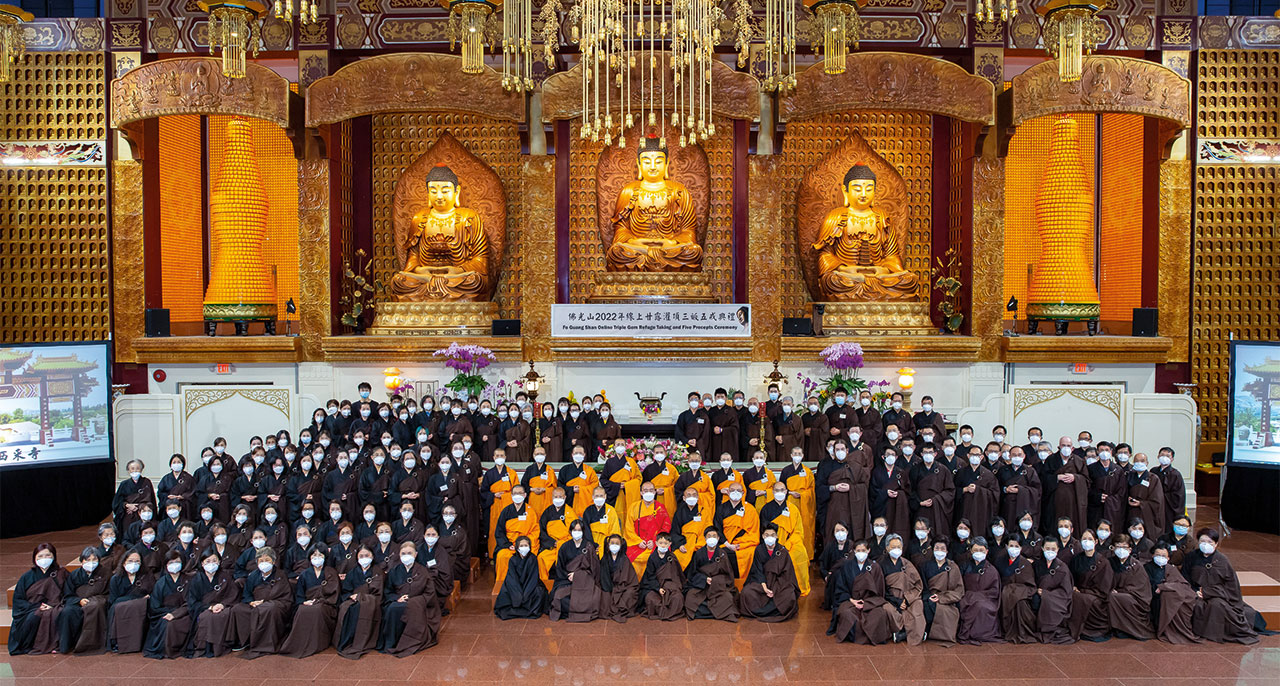 In the main shrine room of Fo Guang Shan’s Hsi Lai Temple in California, preceptees and their teachers celebrate a precepts and refuge ceremony. Photo by Chihcheng Chang

Fo Guang Shan is one of the world’s most influential Chinese Buddhist organizations and has branches in over 170 countries. It was founded in Taiwan in 1967 by the Chinese Chan monk Hsing Yun (b. 1927), who was instrumental in the popularization of Humanistic Buddhism, a contemporary, reform movement that advocates for the application of Buddhist doctrine and practice to everyday life. As part of this mandate, Fo Guang Shan sponsors schools, medical outreach, prison rehabilitation, wildlife conservation, and a host of other social initiatives.

As suggested by its name, which literally means “coming to the West,” Hsi Lai Temple serves as Fo Guang Shan’s North American headquarters. Built in 1988, it’s now an important node in the organization’s global network. Hsi Lai Temple offers a range of activities for the general public, including courses in Buddhist Studies, Buddhist services and liturgies, regular meditation retreats, and educational activities for children and families.

The Dharma Drum Retreat Center is located on 125 acres of woods and meadowlands nestled near New York’s Shawangunk Mountains. The center was established by the Chinese monk Sheng Yen (1931–2009), the founder of Dharma Drum Mountain, a major Humanistic Buddhism organization based in Taiwan. Sheng Yen’s storied life included spending six years in solitary retreat, earning a PhD in Buddhist literature, receiving dharma transmissions in both the Linji (Japanese: Rinzai) and Caodong (Japanese: Soto) lineages of Chan, and many decades of teaching and publishing in both English and Chinese. He was a charismatic and beloved spiritual leader in both Asia and the West.

The Dharma Drum Retreat Center offers a wide range of practice opportunities for all levels. These include one-day, weekend, and ten-day meditation retreats, as well as intensive instruction in huatou practice. (Huatou are shorter phrases than gong’ans or koans). The center routinely offers free workshops, dharma talks, and in-person and online events led by monastic and lay teachers. While deeply rooted in the Chinese Chan tradition, the style of practice at the Dharma Drum Retreat Center reflects Sheng Yen’s aspiration to make Chinese Chan accessible to Westerners. 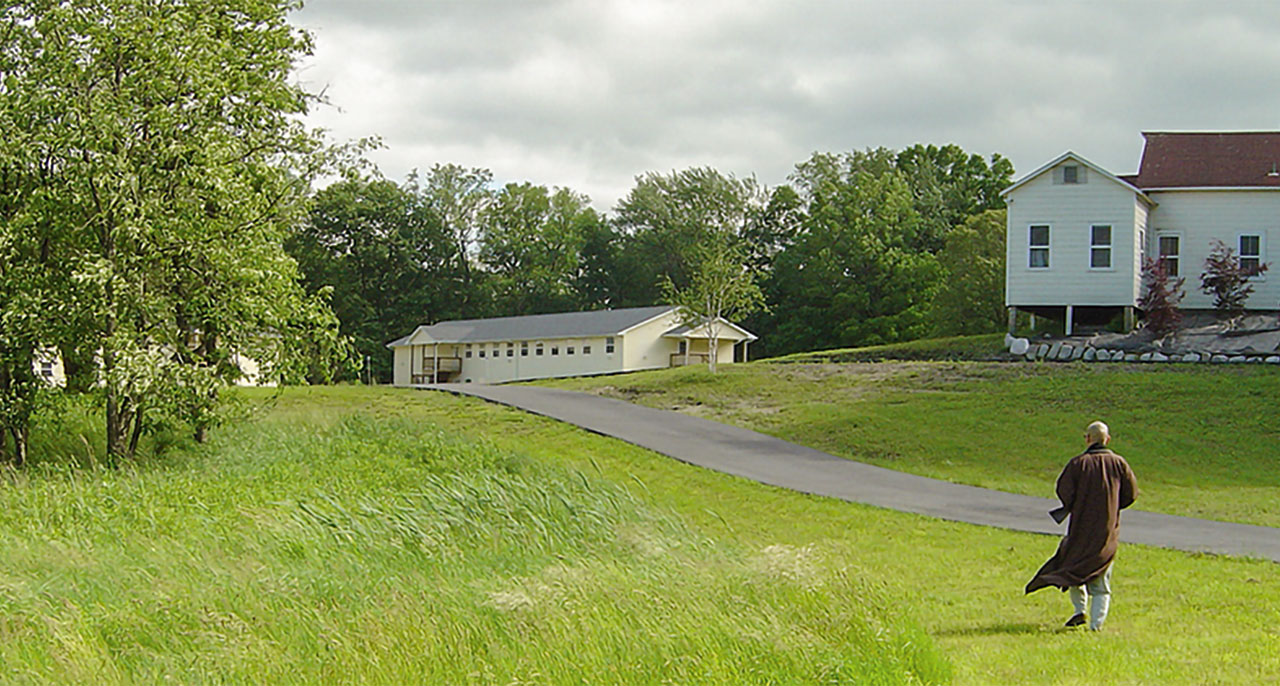 The scenic Chuang Yen Monastery was established in the mid-1970s as the main practice center for the Buddhist Association of the United States (BAUS). BAUS—whose current president is the celebrated American Theravada monk and translator Bhikkhu Bodhi—is a non-denominational organization committed to promoting the teachings of Buddhism from both Theravada and Mahayana traditions. Chuang Yen Monastery is staffed by a vibrant monastic community that’s led by two nuns, Venerable Yung Hsin and Venerable Hong Zhen, who serve as the monastery’s co-abbesses.

The Chinese Tang dynasty–style architecture of the monastic complex includes some impressive features, such as a magnificent statue of Vairocana Buddha (said to be the largest indoor statue of a buddha in the western hemisphere), an arhat statue garden, and traditional Chinese bell and drum towers. In addition to offering dharma talks, meditation retreats, courses in Pali language, and Buddhist holiday services in both English and Chinese, the monks and nuns of Chuang Yen Monastery perform many of the traditional liturgies of Chinese Chan Buddhism, offering visitors a unique glimpse into the ritual forms of Chinese Buddhist monastic practice.

The City of Ten Thousand Buddhas

The City of Ten Thousand Buddhas, or simply “the City” as residents call it, is one of the largest Buddhist monasteries in the West. It was founded in 1976 by the Chinese Chan monk Hsuan Hua (1918–1995). He immigrated to San Francisco in 1962 and established a series of monasteries along the West Coast, eventually expanding into Canada, Taiwan, Hong Kong, Malaysia, and Australia. The City serves as the headquarters of this global organization, now known as the Dharma Realm Buddhist Association. Built on the site of a former state mental hospital, the City is among the most traditionalist monastic centers in North America.

The monastic community follows strict precepts and adheres to a liturgical schedule that begins every day before 4 a.m., with rituals performed in Chinese and English on alternating days. The City also offers a range of activities for laypeople, including meditation retreats for advanced practitioners, long-term residential volunteer opportunities, and Buddhist Studies classes for children and adults through its on-site K–12 schools and Buddhist university. The Dharma Realm Buddhist Association is known for translating and publishing Buddhist sutras.

Lina Verchery is a scholar of modern Chinese Buddhism who teaches Buddhism and Asian religions at the University of Otago. She’s also an independent filmmaker.