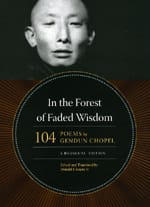 Donald Lopez’s pioneering translation of 104 poems by Gendun Chopel (1903–51) is a welcome addition to the growing shelf of works devoted to the “angry monk,” as a recent documentary film describes him.

Gendun Chopel was perhaps the most colorful, controversial, and compelling Tibetan intellectual figure of the early twentieth century. He was a brilliant thinker and writer and a complex personality whose sojourns in India and Sri Lanka, study of South Asian and Western languages and culture, embrace of progressive political and social ideas, and imprisonment and eventual death upon his return to Tibet have served, in the decades since his death, to elevate him in the eyes of many to the status of cultural hero. He has become emblematic of both the promise and peril of Tibet’s encounter with modernity, which he was among the first from his nation to experience and articulate.

Gendun Chopel was born in Amdo in the Tibetan northeast to a family steeped in the practices of the “old,” or Nyingma, tradition of Tibetan Buddhism. He learned much about literature, art, and religion from his father, an accomplished scholar and expert in the Great Perfection (Dzogchen) teachings. After his father’s death, his quest for further education led him to a series of monasteries affiliated with the dominant Gelukpa school, culminating in his joining the great monastic university of Drepung in Lhasa in 1927.

Everywhere he went, Gendun Chopel distinguished himself by his wide array of talents and interests, which included painting, literary analysis, poetic composition, and above all the philosophical debates that were central to Gelukpa monastic education. He also gained notoriety as an iconoclast, who challenged the interpretations found in the standard textbooks, and in debate could―and would―argue for any position, including those deemed “extremist.” Branded a sophist, distrusted by many classmates, and frequently in conflict with his teachers, he left Drepung and monastic life forever in 1934 when invited to accompany the Indian pandit Rahul Sankrityayana to southern Tibet to search for Sanskrit manuscripts.

At the end of the expedition, Gendun Chopel returned with Sankrityayana to India. He spent most of the next twelve years traveling the subcontinent, visiting Buddhist holy sites and modern cities, as well as living for a year in Sri Lanka and spending considerable time in the hill station of Kalimpong, a center for Western–Tibetan interchange and the fermentation of Tibetan modernism. He met sadhus and scholars, learned first-hand about women and wine, and produced an array of writings that included a lengthy account of his travels. He translated Sanskrit classics like Shakuntala and the Ramayana into Tibetan, wrote a pilgrim’s guidebook to South Asia as well as scores of poems in Tibetan and at least four in English. His history of early Tibet, White Annals, was derived in part from texts that had been recently discovered in the Dunhuang caves in China. He also compiled a manual of the erotic arts that was written in verse, and drawn from Indian treatises and personal experience.

He returned to Tibet in 1946 and gathered around him a small circle of disciples with whom he discussed politics and culture, and to whom he lectured on various topics, including Madhyamaka philosophy. His posthumously published interpretation of the latter would scandalize the religious establishment with its attack on the Gelukpa way of explaining emptiness and the two truths. Not long after he returned, he was imprisoned on trumped-up charges. The real reasons for his incarceration are uncertain, but his critical attitude toward Tibetan political and religious institutions may have been a factor. He emerged from prison in 1949 and died in 1951, probably from cirrhosis of the liver. Though he wrote little in his final years, he did continue to compose poetry, the one thing that had given him pleasure throughout his life.

Whatever their views on his political or philosophical opinions, most educated Tibetans agree that Gendun Chopel was a superb poet, perhaps their greatest of the twentieth century. He was deeply learned in both Sanskrit and Tibetan literature, had mastered a full range of Tibetan poetic forms, and could with equal effectiveness express religious piety, philosophical subtlety, or emotions such as joy, wonderment, outrage, loneliness, bitterness, and despondency. In preparing In the Forest of Faded Wisdom, the prolific scholar and author Donald Lopez has brought together virtually every poem by Gendun Chopel known to exist, apart from poems he translated from Sanskrit and most of his manual of erotics. The book includes a concise and highly informative introduction; facing-page versions of the original Tibetan poems and Lopez’s careful and often eloquent English translations of them; Gendun Chopel’s handful of Victorian-style poems in English; a useful, if insufficiently informative, set of endnotes; and an index of first lines.

Gendun Chopel never collected his own verse, which is found scattered in a multitude of sources, many of them undated, so a chronological presentation of the poems is nearly impossible. Lopez therefore arranges them in six thematic sections: “Teachings of a Master Without Disciples,” “Laments of an Unknown Sage,” “The Ways of the World,” “Songs of the Tibetan Kings,” “Precepts on Passion,” and “English Compositions.” These titles convey the range of topics Gendun Chopel addressed in his poetry, which include traditional Buddhist sutra and tantra teachings, his long-standing sense of persecution and isolation, the vanity and ignorance of people everywhere (whether lay or monastic, Tibetan, Indian, or Western), the greatness of Tibet in its early era, and the joys and snares of sexual love. Some of these are themes found in Tibetan verse from any era, and many of Gendun Chopel’s poems could as easily have been composed in 1640 as 1940. At the same time, though, his first-hand knowledge of India and its culture, his acquaintance with Western scientific and political ideas, and his pessimism in the face of his own and the world’s limitations set him off as decidedly modern relative to other Tibetans of his era―though he himself, as Lopez suggests, must have felt as if he inhabited an in-between state, a bardo, neither traditional nor modern, monk nor layman, Tibetan nor outsider.

The short poem from which the book takes its title is typical:

The old sayings that contain the seeds of truth
The footprints of the rabbit that jumped to the wondrous mountain,
When one enters the forest of faded wisdom,
Who can distinguish right from wrong?

There is a mixture here of nostalgia for the certainties and wonderment of bygone times and regret that in the present day we are lost (like Dante in his time) in a dark wood, where truth and virtue are hard to trace. In his philosophical writings, Gendun Chopel expressed a profound mistrust of all forms of conventional truth, and this view permeates his verse:

How can the deceptions of the mind be counted?
Our attitudes change so much
From childhood to when we are old and decrepit.
Analyze your own experience and you know this.
How can you have confidence in today’s thoughts?
Due to the mind’s insanity, we do not recognize our own face,
Yet we constantly measure the secular and the sacred, heaven and earth.
Courageous are we who seek lasting refuge
In this series of mistaken appearances.

This refuge in illusion, he suggests, is the result of a common trait of human nature:

Calcutta, Nepal, Beijing,
The city of Lhasa in the Snowy Realm,
When I look at people wherever they are,
I see they have the same nature
…
Officials and nobility like flattering talk.
Common people like cunning and deceit.
Today most like cigarettes and beer
…
The natural state of mind in humans and cattle
Is seen to be the same.

In other passages, Gendun Chopel denounces the greed and hypocrisy of the religious elite, compares Tibetan politics unfavorably with systems found elsewhere, and contrasts the superstitions found among his own people with the rationality and effectiveness of Western science. He also laments his own sorry state:

In an unfamiliar region of a foreign land,
I am like a human deer, without companions
…
In the early part of my life, I gathered bundles of books;
In the later part of my life, I carried the burden of hash words.
I have led my life in sorrow.
…
I yearn to return quickly to my own land.

There is a deep strain of melancholy that runs through Gendun Chopel’s verse, yet his poems also evince the curiosity, intellectual breadth, and embrace of the world that made him so extraordinary a figure. He writes of people he has met, sights he has seen, ideas he has considered, and pleasures he has enjoyed. It is clear that despite his renunciation of monastic life and his deep enmeshment in the world, he maintained a basic trust in the buddhadharma and its disillusioning truths:

When looked at, the marvels of the world seem pleasing.
When attained, each has its own suffering.
After moments of brief happiness become but a dream,
There is always something that makes me sad.

He also expresses faith in the luminous nature of the mind, the compassion of buddhas and bodhisattvas, and the importance of virtue, and he feels that in the end,

True, divine dharma, solace of this sadness,
At least once, is certain to come to mind.

In a longer review, one might explore the ways in which Gendun Chopel fits with and differs from a long line of Indian and Tibetan poets, including Saraha, Milarepa, and Shabkar; or how his modern subject matter and sensibility are framed within traditional Tibetan poetic modes, and what his verse tells us about the Tibetan and Indian world of the first half of the twentieth century. One might, as well, debate particular translation choices and lament the occasional appearance of that most persistent of solecisms, the dangling participle. It suffices for now to say that In the Forest of Faded Wisdom makes Gendun Chopel accessible to both Western and Tibetan readers as no book before it has, and that Donald Lopez is to be thanked for the many years of painstaking and fruitful labor that have led to its publication.