Imprisoned author Jarvis Jay Masters is in headlines again in 2022, as his book That Bird Has My Wings: The Autobiography of an Innocent Man on Death Row has been announced as the latest addition to Oprah Winfrey’s book club, thirteen years after its original release. Masters is a well-known Buddhist writer and practitioner who has spent over thirty years on death row for a crime that many believe he did not commit. Masters’ writings focus on healing, meditation, and finding freedom during his sentence. He and his work have been championed by Pema Chödrön, Rebecca Solnit, Susan Moon, and many others.

In his unforgettable memoir, Masters covers his childhood, his imprisonment, and his experience finding Buddhism and meditation. Here’s our review of That Bird Has My Wings, written by Jenny Phillips and published after its original 2009 release. 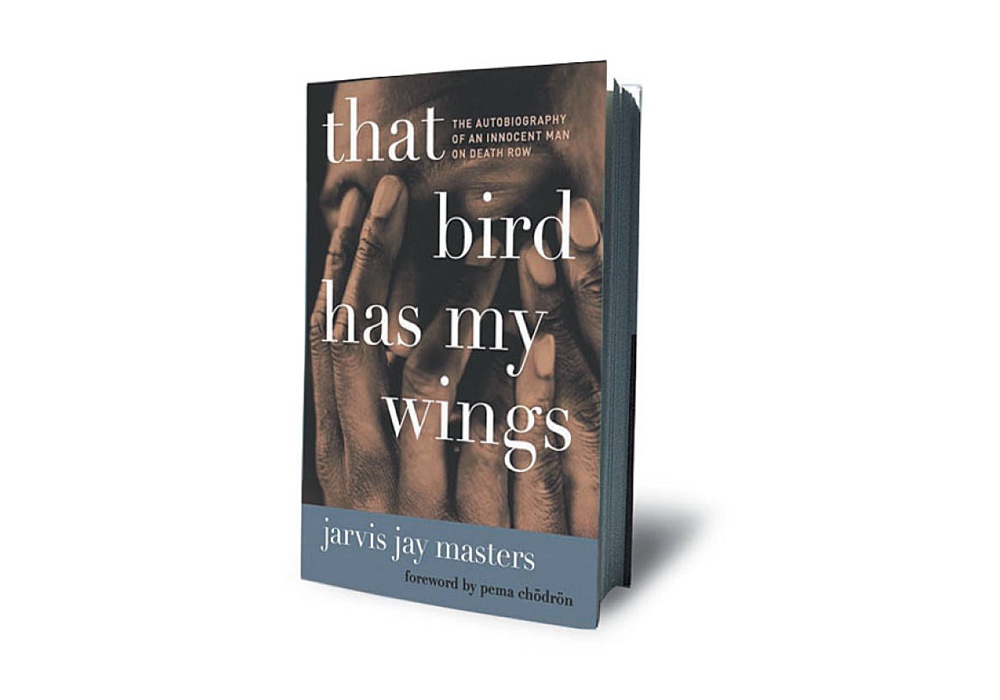 That Bird Has My Wings is a powerful narrative of a life lost on the streets, and then found again in a prison cell on San Quentin’s death row. This is not a book about guilt or innocence, but about the possibility of redemption.

Jarvis Jay Masters’ struggle to write his life story had many challenges, starting with his pen. Like many prisoners, he was given a floppy ink tube, a “pen filler,” rather than an ordinary hard-bodied pen. He says:

I literally cursed the makeshift pen caught painfully between my fingers. There was no name I did not call it. It was not just that it hurt to hold it, but that it moved so slowly, forcing me to attend to every detail. I couldn’t write any faster than it let me; it refused to skim lightly over the surface as I tried to breeze past the unpronounced emotions that would crawl up my throat and fill my eyes with tears… Then I began to silently challenge myself: Without anyone else having to know, I asked, how honest can I be with myself as I write all the scattered memories of my life?

Masters’ incisive unearthing of his past is a graceful and ultimately liberating story. But in what ways did prison, particularly death row, foster this reconstruction? To answer that question it’s necessary to consider the impact of incarceration and all it entails.

Prisons are characterized by danger and deprivation, and they promote feelings of failure, guilt, and shame. The rough, raw underbelly of the battle for survival is acted out in the cellblock, prison yard, and gym, as the subordinated population fights over limited spoils and victories. That said, prisons are also compared to monasteries because both institutions are isolated and offer long periods of time for reflection and introspection. Inmates, therefore, can assume the role of monk or gladiator, and the duality between prison warrior and prison monk is particularly true on death row. In that place, time endlessly stretches ahead with a crushing sameness, and yet it is also running out. There is a heightened awareness of the impermanence attached to all things and experiences, and in the midst of this there can arise a vibrant search for meaning, a need to begin a process of healing.

One way Masters’ healing is revealed is in the way he writes about himself as a boy. He isn’t telling the reader about his boyhood self from an external position but rather from the inside. This is not accomplished solely with skillful writing, but also in the depth of Masters’ journey to connect with his childhood.

Masters’ life story began in a drug house with his siblings, an addicted mother, and a violent and soon to be absent father. In rags, the children roamed through the house, sleeping on urine-soaked mattresses, rarely fed or in any way nurtured or cared for. When darkness came, they gravitated to the stuffy attic dimly illuminated by a streetlamp—there was no other source of light. In Masters’ words, “Only now can I imagine the awful stench of our pee-stained mattresses. After urinating on them for months, we’d become immune to the smell, like a rancher to his cows.”

Eventually Masters was removed from the house by youth services, which began a life-long yearning to be reunited with his mother and to keep her safe from the dangers he’d witnessed while living with her. Separated from his siblings, he was placed with loving foster parents. He absorbed their nurturing and thrived in the safety and structure of their home life, but this was the only time he would have “a taste of normal.” Due to his foster mother’s severe health problems, he was soon taken away and placed with an abusive foster family.

After he ran away, the next stop on Masters’ journey was a juvenile detention hall. Here, briefly, his need for loving figures and a place to belong was satisfied. He excelled at sports and made a best friend, Fred, who had been badly burned by his father. Fred’s courage in the face of disfiguring scars and severe physical pain inspired in Masters a sense of admiration and personal capability.

Eventually, Masters was united with his mother’s extended family, but within this large and at times loving family, he found neither safety nor stability and he took a downward course, culminating in incarceration at the age of nineteen. He struggled to establish himself within the prison gladiator culture and, four years later, this led to his being convicted of participating in a conspiracy to murder a prison guard and being sent to death row.

At that moment, an important teacher stepped into Masters’ life. Melody was a private investigator working on his legal appeal. Rather than a distant, well-heeled expert, she possessed the perfect alchemy to help Masters pick up the pen filler. She sent him books on how to meditate and how to deal with pain and suffering. “Like me,” writes Masters, “she was confronting a lot of things in her past.” She was a fellow human being with whom he could establish a sense of empathic connectedness.

As a result of the initial contact through Melody, Masters gradually became established within a community of Tibetan Buddhists. Through Tibetan teacher Chagdud Tulku Rinpoche and many others, he found at last a place in which he belonged. “Rinpoche and I had something in common,” explains Masters. “He had been a rebellious kid who wasn’t born with a silver spoon in his mouth. I thought, here’s a tough guy who can take me out of prison, even as I remain here.”

The reinforcement and loving guidance offered by Rinpoche and the Buddhist community were all that Masters needed. Meditation allowed him to seamlessly weave together writing and spiritual practice. He says:

Alone with myself, I began to write and the floodgates of memories began to open. I started getting up early to try to calm my mind so I wouldn’t panic. Through meditation I learned to slow down and take a few deep breaths, to take everything in, and not to run from the pain but to sit with it, confront it, accept it in a way I never had before.

Through meditation, Masters was able to quiet his mind, become softly aware of his breath, and allow his thoughts, memories, and emotions to rise to the surface. By remaining an active witness, he felt a shift in understanding—a fresh sense of truth and personal responsibility, and a new compassion for others. With his breath, he rode out the storms of emotion, painful memories, and unwanted but essential realizations. The journey was turbulent, yet ultimately healing.

The interwoven spiritual and writing processes soon manifested in Masters’ relationships with others. For instance, fellow-prisoner Bork, a neighbor in his cellblock and a serial child rapist and murderer, became grist for the mill of Masters’ psychological recovery. Before learning of Bork’s crimes, Masters had enjoyed long chess games with him. After, he was swept away by outrage, contempt, and hatred. Masters realized, however, he was being poisoned by this hatred and he began to work within on his negativity. Through this process, he was able to extend his newfound empathic connectedness to Bork. Masters describes it this way:

Then a bigger feeling broke through as I plugged into all the human suffering throughout the world. Why hadn’t I seen Bork as part of it? … I felt a mental clarity that lifted me above all the clouds of my own making.

Jarvis Jay Masters is still living on death row but—from attic to prison cell—he has never ceased his search for meaning and belonging and, at last, he has found it inside.

Jenny Phillips is the director and producer of the documentary film, The Dhamma Brothers, about the impact of vipassana meditation courses on the lives of inmates in a maximum-security prison in Alabama.