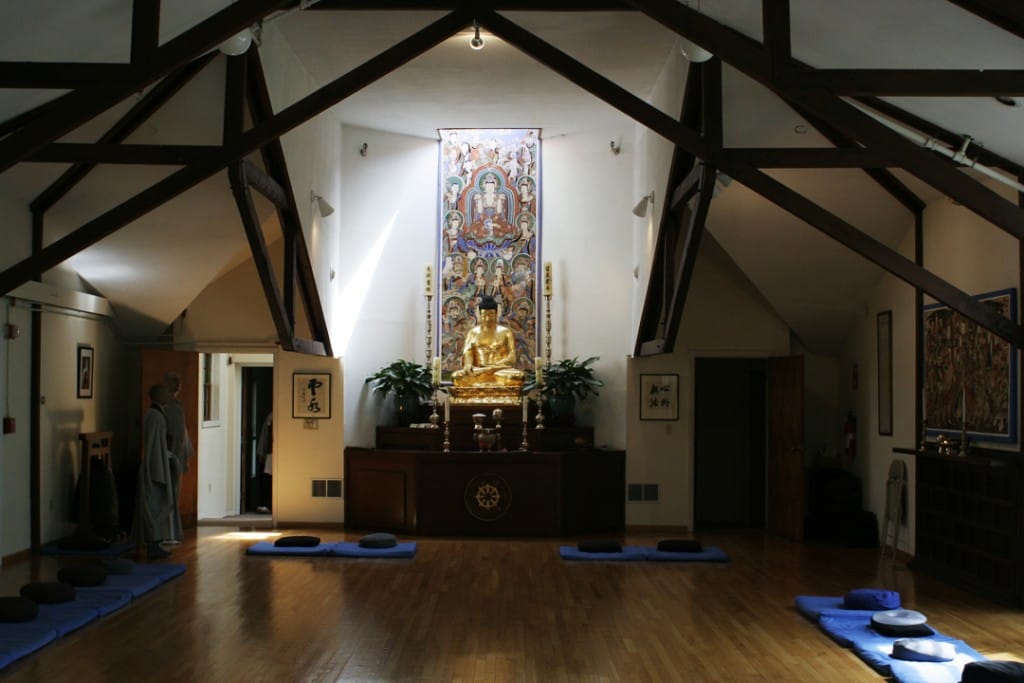 In the days before the internet and local dharma-supply shops, Buddha statues were hard to come by in the United States. This meant that in 1974, Master Seung Sahn’s emerging American sangha had to make do with the paint-it-yourself Buddha that they’d managed to acquire. It also meant they had to agree on what color to paint it.

One sangha member wanted to paint the Buddha deep brown and another wanted to paint it light green. Unable to agree, they went to Seung Sahn and they each explained why their color of choice was the best. Seung Sahn listened patiently and then he took the two paints and he mixed them together. “Paint it that color,” he said.

That color was slime green, recalls Mark Houghton, who is now a guiding teacher of the Cambridge Zen Center, a branch of the Kwan Um School of Zen founded by Master Seung Sahn. Slime green didn’t make for a pretty Buddha sitting on the altar, but it did remind students to let go of attachment, to let go of likes and dislikes. “There were countless things he did like that that accentuated the simplicity and clarity of the teaching,” adds Houghton.

Seung Sahn’s personal life, particularly his life before he became the first Korean Zen master to live and teach in the West, wasn’t something that he talked much about. Though he was warm and inviting, says Houghton, “he remained a teacher, not a friend.” Even Houghton and other close students only learned about Seung Sahn’s early life through his biographies.

Seung Sahn was born to a Christian family in 1927 in northern Korea. In 1944, he joined the underground independence movement to help liberate his country from Japanese rule, but he was caught and narrowly escaped execution. After his release from prison, Seung Sahn began to study Western philosophy at university. But he later decided that he couldn’t help his country by studying, and instead shaved his head and went into the mountains, vowing not to come down until he had found the truth he was seeking.

In 1948 Seung Sahn became a Buddhist monk. After his ordination, he began a hundred-day retreat that involved eating only pine needles, taking ice-cold baths, and chanting for twenty hours daily. According to his biographies, he experienced terrifying visions as well as visions of bodhisattvas, and his skin turned green from the pine needles. On the hundredth day, he said he felt his body disappear, and when he returned to it, he understood that everything was his true self.

At the age of twenty-two, Seung Sahn received dharma transmission from Zen Master Ko Bong, thereby becoming the seventy-eighth patriarch in this line of succession. In 1957, he became the abbot of Seoul’s Hwa Gae Sah temple. In the course of his duties, he heard of a Japanese temple in Seoul that had the bones of five hundred Japanese corpses. Lay Koreans wanted to throw the bones out, but when Seung Sahn heard this, he told the temple officials, “Whether those bones were once Korean or Japanese, dead people’s bones are all the same.” He brought the bones to Hwa Gae Sah and chanted for the spirits.

Later, some Japanese people came to claim the bones of their ancestors and, out of appreciation for his care, they invited Seung Sahn to go to Japan. Some Koreans say, We lost a great master to Japan and America because of some dead bones.

In 1972, Seung Sahn arrived in the United States and established his first American Zen center in a dodgy area of Providence, Rhode Island. The only furniture in the small apartment-turned-zendo was a table and a few chairs, but there was also an old pot in which Seung Sahn made delicious soups that he shared with his small but growing circle of students.

After two years, the apartment could no longer accommodate the expanding community and they bought their first house. Over time, more properties were acquired and now, fast-forwarding to 2009, the Kwan Um School of Zen is an organization of more than a hundred centers and groups, located across Asia, Europe, and the United States. Seung Sahn, however, passed away on November 30, 2004, after a long struggle with diabetes. He was at Hwa Gye Sah temple when he died.

Barbara Rhodes, one of Seung Sahn’s first American students is now the Zen master and guiding dharma teacher of the Kwan Um School of Zen in the U.S. Zen Master Richard Shrobe, the guiding teacher of Kwan Um’s Chogye International Zen Center of New York, says that Rhodes “has tremendous strength and tremendous sincerity, and is very down to earth and everyday-oriented.”
She seems to have gotten her practicality from Seung Sahn. Rhodes says of her teacher, “He would hand enlightenment to people on a platter. He would explain exactly what clear mind actually is: it’s nothing. What you see, what you hear, what you taste is the truth. He did not make a mystique out of it.”

Rhodes, however, doesn’t run the American branch of the Kwan Um School of Zen in the same way that Seung Sahn did. “He was very chauvinistic in some ways,” she explains. “He was very bossy. He used to say, ‘I speak. You only action,’” Rhodes laughs.

Now the school is much more democratic. The teachers have meetings three times a year, and they make decisions by consensus. How to handle other matters is left up to the individual centers. Rhodes and other senior teachers juggle their school duties with their householder duties. Rhodes, for instance, is a nurse and mother who has lived with her partner, Mary, for twenty years. Houghton, on the other hand, works as an executive in his family’s chemical company.

The sangha of the American branch of the Kwan Um School of Zen mourned the loss of Seung Sahn but, in terms of both teaching and organization, things are still running smoothly more than four years after his death. Rhodes attributes this to Seung Sahn’s teaching style. “He didn’t believe in thinking that a teacher had special powers,” she says. As Rhodes sees it, instead of creating students who were dependent on him, he nurtured students to be able to stand on their own two feet.

As for the future, Rhodes hopes more people practice and come to the retreats. “There is a lot of attendance,” she says. “But we’re never going to be popular. The Korean version of Zen is kind of funky and unpretentious and not quite as attractive. But there are people who are attracted to it.”

“We have an incredibly beautiful practice,” Houghton says. “The emphasis has always been on plunging in the water, not studying the book or reading the menu. I love that quality.”