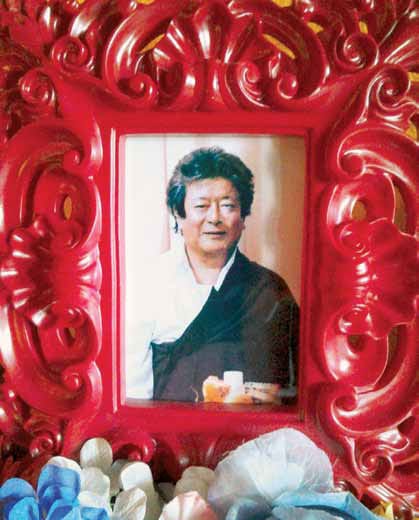 Kyabje Thinley Norbu Rinpoche was fond of quoting Omniscient Longchenpa’s Treasury of the Dharmadhatu and in particular the following verse:

Thinley Norbu Rinpoche was a quintessential Dzogchen master of modern times, forever loyal and faithful to the lineage of pure wisdom awareness. Whoever had the good fortune to encounter him was either directly or indirectly led toward their innate buddhanature.

Often Rinpoche would use himself as an example when teaching or giving pointing out instructions, as though he was the one learning what was being said. One time he told me that, even though contemplating impermanence was a crucial step on the path to liberation, without the view of the deathless dharmakaya, it could lead to depression and lethargy. He said that to uplift himself, he would bring the thought of impermanence into the view of the deathless dharmakaya; in this way he could look forward to death, knowing that there was no death from the point of view of the three-kaya-wisdom buddhanature, and that this nature permeated every aspect of our reality. During the more than thirty-five years he taught in the West, Rinpoche’s most consistent, crucial instruction was to always have faith and confidence in the three-kaya-wisdom buddhanature.

Rinpoche was adamant about maintaining the purity of the wisdom lineages traced back to Guru Padmasambhava and Lord Buddha Shakyamuni and spoke out with impeccable logic against anyone who tried to water down or change the truth to meet their own modern agenda. To be a disciple of Rinpoche was to undergo a core level transformation that would leave one’s ego and self-grasping baseless from the root. How amazingly fortunate we were here in America that Rinpoche decided to live among us and work deeply with disciples, young and old, to sow potent seeds of authentic transmission that will endure for future generations.

Though there are many accounts of amazing teachings that occurred in my own personal relationship with Rinpoche that have shaped and directed my life, one story is my all-time favorite. Many years ago I was suddenly asked to go to a venue where Rinpoche was teaching for several weeks and offer English translation so that he could speak Tibetan and conserve energy. Warned by colleagues that for various reasons no translator lasted more than a short while when working with Rinpoche, I was decidedly nervous. I took my seat and did my best that first night, and much to everyone’s surprise Rinpoche did not stop or criticize me, and the teaching concluded without incident. The second night, I took my seat and one of the attendants came over and said she needed to tie a small cord around my big toe, and the other end would be in Rinpoche’s hand. As she tied the cord around my toe I looked up and saw Rinpoche gazing down upon me with a mischievous smile. Then the fun began.

Rinpoche explained to me that even though he did not know English very well, if there was a word or phrase that might need adjusting while I was translating, he would simply tug on the cord to indicate I should stop speaking. He would then speak to me quietly in Tibetan and suggest another way to translate something. For those of you who never met Rinpoche, he was extremely polite and gracious. So the teachings began, and as I spoke he repeatedly tugged on the cord. He would then ever so kindly help me find a better way to express the teaching, based on a choice of terms that brought out the wisdom perspective. This process continued for several days, with most of the attendees oblivious to what was going on. Then one night, the cord was not tied to my toe and I knew that Rinpoche trusted me to represent what he was teaching in the way it should be expressed. He empowered me to know how to let the wisdom blessing pass through me without ego or pride so that the listeners could hear and feel exactly what he had said. This experience was a turning point in my life and has given me the opportunity to refine translation work and develop a sense of confidence that otherwise would not have happened.

Even though Thinley Norbu Rinpoche was among the greatest scholars and realized practitioners of our time, he never referred to any of his thousands of disciples as “his students.” Rather, he referred to us as friends. He believed Western teachers and translators needed to be aware of the problem of pride, which he referred to as the ugliest and most detrimental of the five poisons. This was just one of the ways he demonstrated the teachings.

May the legacy of Rinpoche’s wisdom transmissions and blessings remain in this world forever and may he swiftly return as a nirmanakaya to continue working for the benefit of all living beings.

Sangye Khandro has served as a translator for many prominent masters, including Thinley Norbu Rinpoche, and is one of the founders of Light of Berotsana Translation Group. A longtime practitioner of Vajrayana, she studied with Thinley Norbu and his father, Dudjom Rinpoche, her root teacher.