Pico Iyer on the Dalai Lama’s unerring ability to home in on those who most need his love. 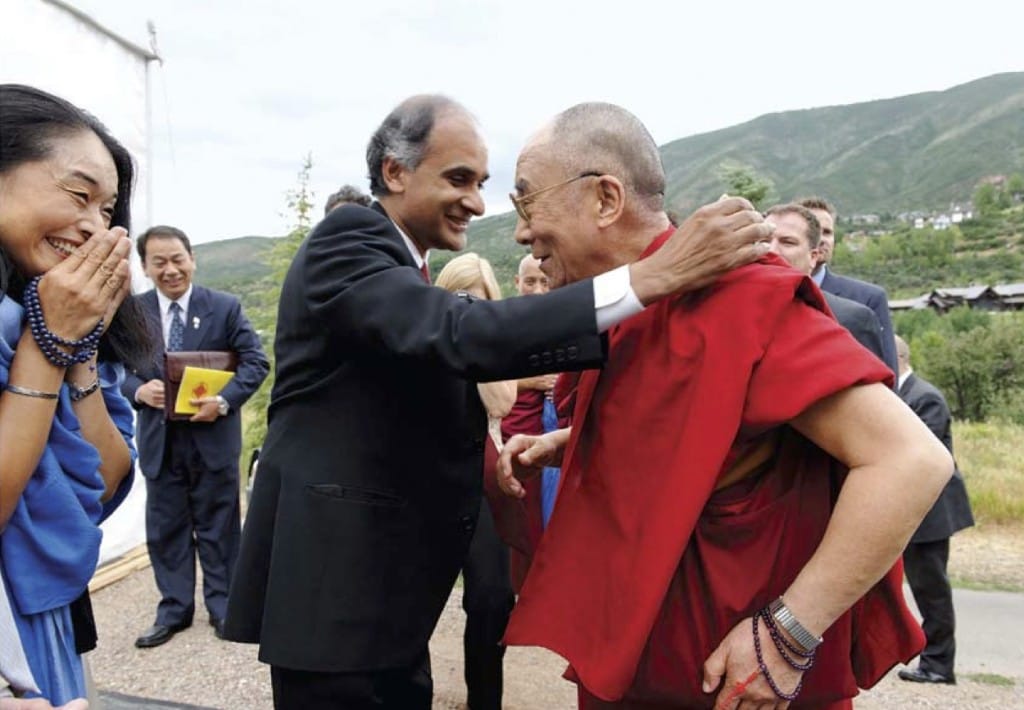 While going through an almost unimaginably busy schedule on a typical day of touring, he’ll be hustled toward his next appointment and then, suddenly, alone among a crowd of fifty or so, he’ll veer off, because he’s seen a child in a wheelchair, by herself and ignored, over in one corner. Often, he’ll respond warmly to even the pushiest person trying to make contact with him on the street, and that is perhaps not only because he tries to live without aversions as well as attachments, but because he’s sensed that that person is in need in some form—lonely or unsure of himself—and the pushiness is just an expression of deep pain.

Over and over, traveling with him, I’ve seen him bring this kind of vision to each microsecond, as startling to me as the way he’ll remember the color of the shirt my father was wearing the last time he saw him (twenty-three years before) or, peering into a large crowd, recognize someone he last saw in Lhasa in 1957 (one of the least esoteric but most practical results, I suspect, of all the meditation and other forms of training he engages in every day).

As leader of his people for seventy years now, used to dealing with kings and prime ministers and Amdo peasants, the Fourteenth Dalai Lama is of course as richly schooled in diplomacy and every kind of protocol as the Queen of England or Thailand’s king IS. And his intuition means that, upon suddenly greeting a roomful of strangers, old acquaintances, and colleagues, he’ll know which one to shake hands with, which one to hug, which one to greet with a namaste, whose pony-tail to ruffle, so each feels individually warmed and touched and none feels left out or hard done by. But there’s something more going on here that makes him a kind of virtuoso of kindness, as every doctor (even of philosophy) aspires to be—and as befits one believed to be the incarnation of Avalokitesvara, the bodhisattva of compassion.

I took my mother to see him last spring, in Santa Barbara, and though she had met him before, in Dharamsala and California, it had been many years, and she was of course excited. The Dalai Lama, as we went into his suite, had a cold, looked to have just awoken from a nap, and was (I could tell) not at his best after having flown all the way from India to California, a twenty-four-hour trip across twelve and a half time zones, the day before.

The minute he saw her, though, all his attention was on her, and only her. He explained impermanence by picking out a stray hair falling across her forehead. He asked her for a copy of the photo she had brought along from their last private meeting. He tried to answer questions she’d been storing up for twenty-five years to ask him. When she ran out of them, he just held her, pressing his head against hers, and suggested a photo with only the two of them, till my mother was sobbing and sobbing with joy as I’d never seen her do in my fifty-two years of almost hourly acquaintance.

The next week I was doing an onstage event with him and Mary Robinson, former President of Ireland, at New York’s Town Hall, and his plane down from Boston was caught up in a thunderstorm, causing him to arrive seconds before he was due onstage. He took time to offer a proper hello to everyone and then, though he had another appointment right after, made sure to have a private moment with President Robinson and me after the public conversation, and then to spend several minutes with the event’s organizers, who had been hoping to see him beforehand. I noticed that a mother, father, and small daughter were trying to shake hands with him, but were obscured by the large crowd in front of them. Somehow, just as I was wondering whether to intercede, he picked them out, and said, “Come, come, a photograph!” as if voicing their unspoken thoughts and hopes.

Five days later, as flames encircled our family home in Santa Barbara, and I, forcibly evacuated, was thinking anew of impermanence, I got a call out of the blue from Dharamsala, where it was midnight. It was my wife, telling me that the Dalai Lama, though just off the plane from America—not a short flight for a seventy-three-year-old—had shared some moments with her too, and she began sobbing, and saying how unworthy she felt, just as my mother had done two weeks before.

Only one typical household and three typical beings of the many, many thousands the Tibetan leader must have encountered that month. But it’s safe to say that somehow, with every person he’d met, for the first time, the tenth time, or the ten-thousandth time, he’d found just the way to break her open emotionally, till she saw no division between him and herself, and was running over with thanks and happiness. It’s not, finally, just a matter of the Dalai Lama’s training or teaching or even temperament; those who are really deep in the Buddhist teachings feel every pain of another as keenly as if it were their own. Conversely, they share every joy and blessing in themselves as if the other were just themselves in a different form.

The Dalai Lama’s ideas are what stay with us and enable us perhaps to draw a little closer to the people we would like to be; but his instant, instinctive, almost miraculous compassion is what may wake us up to these possibilities as immediately as the wooden stick of Zen can do. You don’t just hear or think about compassion when you see the Dalai Lama; you feel it in that place beneath all words and texts.

Even after thirty-five years of knowing someone, it’s still possible to be surprised, enlightened, moved—especially if that someone is as constant, as multifaceted, as the Fourteenth Dalai Lama. It took me decades, I think, of watching him and following him on his travels around the world to see that one of his greatest and most mysterious gifts is a kind of radar that alerts him to who in a crowded space is most in need of help. He’ll walk into a jampacked school auditorium and, in the midst of greeting his hosts and shaking hands with everyone eager to say hello to him, making eye contact with each one, he’ll notice through a kind of peripheral vision (or intuition) someone on crutches, and walk instantly over to that person and offer a blessing, a reassuring touch.