Now more than ever, says Buddhist teacher Pamela Weiss, we need to do away with patriarchal values and reweave women’s voices into the torn fabric of our world. As the Buddha did in the face of Mara, we need to reach down and touch the earth. 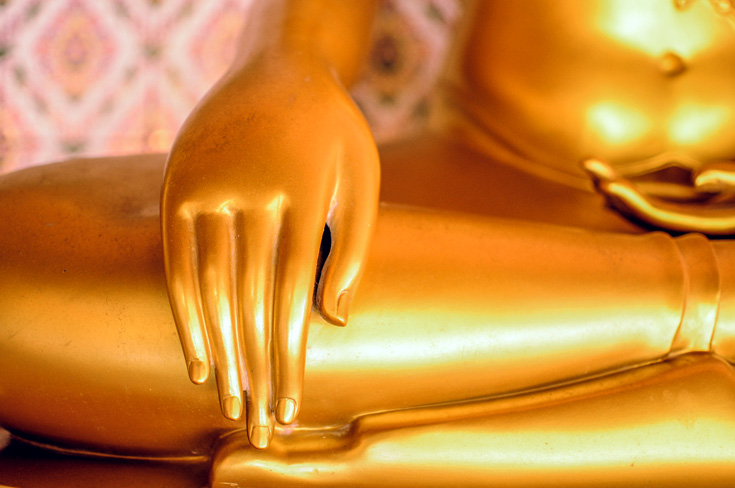 Every morning in Soto Zen temples around the world, the names of the ancestors are chanted. It is a powerful practice of recognition and recollection, honoring the lives of great teachers across India, China and Japan, and reminding us that we do not walk alone. Real people—with real human struggles, doubts and breakthroughs—have kept Buddhist teachings alive, passing them warm heart to warm heart for over 2,600 years.

The beautiful gesture of touching the earth reminds us that awakening is less about stretching up toward transcendence than it is reaching down into the dirt.

While I lived at Tassajara, the first Zen monastery on Western soil, I committed the names of the lineage to memory. I delighted in learning their stories, and found inspiration in their quirks and foibles as solace for my own bumpy journey. Several years after leaving, I returned for a visit and was surprised to hear a new chant announced: the names of the women ancestors. I remember listening, rapt, as the names of these previously unsung, unacknowledged women washed through me. Then I burst into tears.

All those women. I hadn’t known how much I missed them until their names were literally ringing in my ears.

The Rent in the Cloth

History is shaped by the perspective and agendas of those who record them. For several hundred years, the teachings of the Buddha were passed down in an oral tradition. By the time they were written down, their tone and flavor were influenced by the male monastic scribes who recorded them. Early written accounts of the Buddha’s teaching are rife with distrust and disgust toward sexuality, desire, and women’s bodies. These teachings consistently depict women as only obstacles to male ambition. Women’s stories and perspectives are markedly absent, flitting around the edges like shadows. The Buddha’s wife Yasodhara, for example, is rarely mentioned, and is often only named as “the mother of Rahula,” their son.

According to these early accounts, the Buddha was reluctant to include nuns into his community at first, though women (including Yashodara) were eventually invited to join. Buddhist nuns’ experiences of awakening are recorded in the Therigattha, a collection of poems that illuminate their insights and pay tribute to their capacity to awaken, even while they were saddled with oppressive rules to keep them in perpetual subservience to the monks. It is unclear whether these rules originated from the Buddha himself, or were added later. What is clear is that they were woven into the fabric of the sangha (community), and that their long shadow persists in Buddhist sanghas today.

Untangling the history of misogyny from Buddhism asks us to consider how modern-day Buddhist institutions continue to preference men, overlook the experiences of women (and those who are transgender or gender fluid), and disregard feminine qualities. To recount the historical and mythic stories of women surrounding the Buddha is an act of reparation, stitching the parts left out back into the fabric of spiritual life.

Here are three examples to help repair the rent in the cloth and begin to restore a fuller, more balanced spiritual life.

Voices of the Feminine

After leaving home, Siddhartha Gautama, wandered the countryside, studying with the foremost spiritual teachers of his time. During this period, he took up the practice of extreme asceticism. For a period of time, it is said, he ate only a single sesame seed a day. Teetering on the edge of self-annihilation, a question arose in him: “might there be another way to enlightenment?” In response, a memory bubbles up in him: he recalls a time as young boy, seated under the shade of a rose apple tree, when he spontaneously fell into a state of meditative bliss, and he realizes: yes! There is another way to enlightenment —a gentler way, ripe with pleasure and enjoyment, and absent denial and hatred of the body.

This memory causes Gautama to abandon his severe ascetic practice and accept a bowl of rice-milk from a beautiful, young milkmaid, Sujata, who was bringing it as an offering to the tree spirit of the tree where Gautama was seated. Instead, out of compassion, Sujata offers the rice-milk to the emaciated yogi. After receiving Sujata’s offering, Gautama begins to regain his health and strength. Although his ascetic companions ostracize him for succumbing to the temptation of food, he realizes that hostility and hatred toward the body is not the path to awakening.

After he has been nourished, Gautama takes a seat, determined not to move until he awakens. As he sits, he is besieged by the “armies of Mara.” Mara is the archetypal figure who represents inner judgment and doubt. As Mara’s arrows arc through the air toward him, Gautama calls out, “I see you Mara. I know you Mara.” And with the power of his mindful awareness, each arrow magically transforms, mid-air, into a lotus blossoms, showering him with fragrant petals

But Mara is not yet ready to give up. In a final attempt to unseat the soon-to-be-Buddha, he whispers in his ear: who do you think you are? This potent question cuts right to the heart of spiritual practice—who do we think we are? Gautama’s response is telling. He doesn’t argue or defend. He reaches down and touches mother earth. The earth trembles in response, and Mara slinks away, defeated.

The lessons gleaned from these mythic stories belie the hyper-masculine trope of a solo, self-reliant hero’s journey, and suggest a more feminine flavor of practice. The Buddha’s memory of the rose apple tree invites the inclusion of non-linear, intuitive ways of knowing—listening to inner questions and calling on memories and dreams. The tale of Sujata illustrates that hatred and aggression toward the body are (literally) a dead end, and emphasizes the need for true sustenance as we walk the path. And the beautiful gesture of touching the earth reminds us that awakening is less about stretching up toward transcendence than it is reaching down into the dirt, honoring our earthly, maternal home.

The World on “Tilt”

Now more than ever, we need to reweave women’s voices and feminine values into the torn fabric of our wide, aching world. We live in an entrenched ethos of patriarchy, which is defined as “the passing of power and privilege through a male lineage.” The impact of patriarchy shows up in the many ways we favor masculine over feminine principles: mind over body; intellect over emotion; light over dark; speed over stillness; hard over soft; activity over rest; logic over intuition; rationality over mystery. This energetic “tilt” has resulted in tremendous personal, cultural and planetary dis-ease.

We will need to slow down, listen more, and do less.

Traditional Chinese Medicine describes that when masculine (yang) and feminine (yin) energies fall out of balance, disharmony in the body arises, often leading to illness. When these energies tip into disequilibrium within society, we witness growing cultural and political divisiveness, economic inequity, and rampant levels of stress, loneliness and anxiety. At a planetary level, we see wild swings in weather patterns, ecosystems dying, and the emergence of pernicious disease.

The COVID-19 pandemic has laid bare the truth that we really are one world. Man-made walls and barriers are no match for it. “Social distancing” will only work if each of us engages in physical separation as an act of care and generosity for the collective good.

As a culture, we are skilled in taking action: wash your hands, cough into the crook of your arm. But we are less skilled in restraint: stay inside, don’t hoard soap or toilet paper. But if we are to succeed in flattening the curve of the pandemic, we must also flatten the curve of our greed and reactivity. We will need to slow down, listen more, and do less. We will need to question, as the Buddha did, the inner rev toward ambition and accomplishment, and to quiet ourselves long enough to listen for responses we may have been moving too fast to notice.

In times like these, it is vital to nourish and rest rather than push or punish the body, and to discern true sources of nourishment—perhaps a bowl of rice-milk from time to time, but also the sustenance of meditation, prayer, laughter and the raw beauty of nature. As we take in the onslaught of bad news, it is essential to discern real fear and sadness, from the sharp, disparaging arrows of Mara. And when we feel our heart quiver as we gaze into the chasm of unknown, it is useful to remember to reach down and touch the earth; to be humble and grounded; to lean into what really matters; and to realize: we, too, belong.

Pamela Weiss is the author of the forthcoming book, A Bigger Sky: Awakening a Fierce Feminine Buddhism. She is the first and only layperson in the Suzuki Roshi Soto Zen lineage to receive full Dharma Transmission, and is among the few Buddhist teachers authorized to teach in two traditions. She is currently a member of the Spirit Rock Teacher Council, a guiding teacher at San Francisco Insight, and a visiting teacher at the Brooklyn Zen Center.