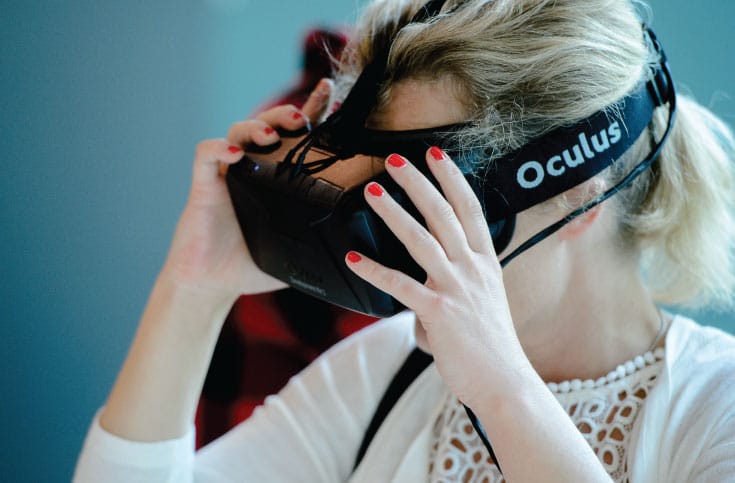 It won’t be long before you can slip on a headset and enter a new dharma realm. But, says Vincent Horn, we should watch our step.

“Presence”—that’s the term used by the makers of virtual reality (“VR”) to describe how immersive it feels when you’re in one of their simulated three-dimensional environments. It’s the visceral feeling of actually being somewhere. I experienced this myself when I tried the Oculus Rift (a VR headset technology that Facebook recently purchased) and found myself actually leaning over to peer under a digital table.

Virtual reality has been around for decades now, but it’s in the last few years that we’ve seen real breakthroughs. Shrinking computer components and next-generation smartphone screens are combined in wearable headsets that create immersive visual and auditory environments and place us “present” inside them.

As VR develops and improves, the applications will only get more mind-blowing. We’ll also see these technologies affect how many of us connect around and practice dharma together, changing our experience of the Buddhist community as new contemplative technologies take advantage of VR. We’re also likely to see new challenges and problems unique to these technologies. Some of these challenges might best be understood from a dharmic perspective, as they’re intimately tied to our sense of identity, as well as to its potential fracturing.

So what does the future hold?

Dharma in the Cloud

Many geographically based sanghas already have a virtual component: they share their teachers’ in-person talks online or use the web to get out information about their activities. Some are going completely virtual, like the Buddhist Geeks Dojo, a virtual sangha I’ve been helping build. I think of these as cloud-based sanghas, because they exist almost entirely on the web and in the cloud.

Instead of meeting online in two dimensions, cloud-based sanghas will gather in three-dimensional virtual environments.

Over the next several years, we’ll see sanghas integrating and adopting virtual reality technologies. Instead of meeting online in two dimensions, these cloud-based sanghas will gather in three-dimensional virtual environments. No longer reaching locals only, brick-and-mortar sanghas will become what I call ubiquitous sanghas, able to bring people into their “space” from all over the world. Fixed in neither analog nor digital space, they will exist everywhere, attracting people of different backgrounds and lowering the barrier of entry into communities dedicated to the practices of awakening.

There are already “consciousness hackers” developing a new generation of contemplative technologies that use things like virtual reality, biosensors, and brain/computer interfaces to supercharge the processes of various kinds of meditation. Meditation, after all, has gone mainstream—so it’s natural that the technology industry is following suit.

These technologies may do for meditation what MapQuest and Google Maps did for travel. Using programmable sensory environments and advanced bio- and neurofeedback, they could help us quickly learn styles of meditation usually only mastered after years of training. 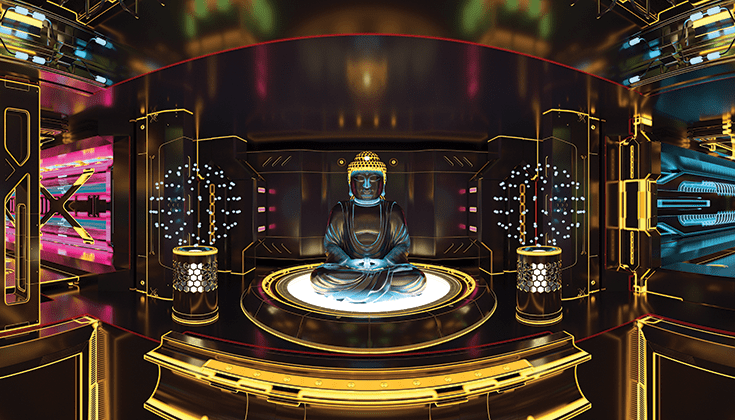 More people will be exposed to contemplative states, but there will also be something lost in the process. Take Google Maps as an example—while it has enabled millions of people to travel easily in places they don’t know, it also creates a dependency on the technology. How many people simply rely on the software to show them how to get somewhere, rather than learning for themselves? The same may end up being true when certain aspects of meditative training can be outsourced to our machines.

The Dark Side of Virtuality

We can’t know what the downsides of VR are going to be yet, but there are already some hints. When I was interviewing virtual reality philosopher Michael Heim recently, he mentioned what he called “alternative world syndrome.” AWS can happen when someone moves too quickly between different worlds and isn’t able to integrate their experience of each. The result is a sense of disorientation—not really knowing where or who one is. Soldiers using virtual reality trauma treatments have already reported having AWS effects, so this is a very real danger.

There’s also the issue that VR is not a complete enough sensory immersion. We don’t yet know what the effects will be of having a complete visual and auditory immersive experience, while the rest of our senses are left behind. Nor do we know how this will affect people’s relationships with the natural landscape of the earth. If you can go to a beautiful environment that is virtual, will that encourage you to care more for the actual planet? Or will it cause the perceived split between digital and analog to only deepen? The same must be asked of dharma centers: how much will they suffer declining attendance as new devices, and new options, appear in our homes?

When Grandma is able to put on a headset and suddenly have a series of identity-disrupting experiences, what will the fallout of that be?

Contemplative technologies may also have the effect of rapidly dissolving one’s sense of a normal reference point. Many forms of Buddhist meditation are designed to do just that, but they have safeguards built in. These include explicit warnings and maps, the support of mentor and peer relationships, and special environments of training that are designed to minimize the fallout of such disruptive insights. But when Grandma is able to put on a headset and suddenly have a series of identity-disrupting experiences, what will the fallout of that be?

Since creators of VR meditation experiences are ultimately offering meditation experiences stripped of the supportive frameworks that systems of dharma offer, they must create safeguards so that VR tech can lead us to transformative experiences, not destabilizing ones. Perhaps the best way to do this is to build and maintain relationships with trained dharma teachers and communities that can help.

Buddhist contemplative traditions have, for millennia, carefully led us in the process of deconstructing our normal sense of identity and replacing it with one that’s both fluid and responsive. Our challenge is to build that wisdom into our next generations of contemplative technology. If we can do it well, our experience of reality will never be the same.

Vincent Horn is a cofounder of Buddhist Geeks, which asks, "How can we serve the convergence of Buddhism with rapidly evolving technology and an increasingly global culture?"