From childhood on I have had to struggle to break from the impositions of images that don’t represent me accurately or well. Even though this is a drag, it too is part of the struggle, part of the process of decolonization. 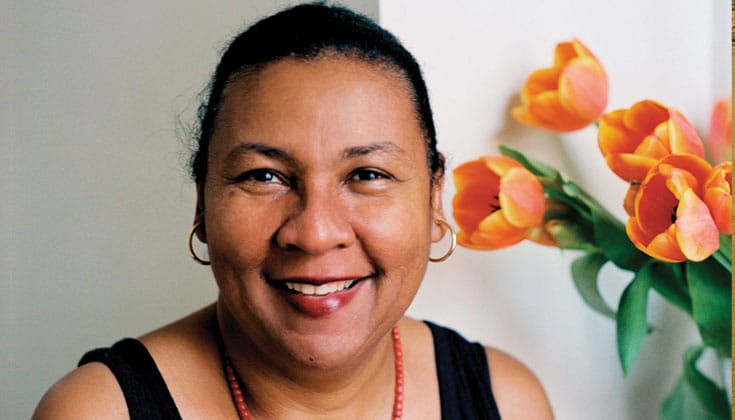 The lights are low in my place and I am listening to Brandy sing: “I’d like to get to know if I could be the kinda girl you could be down for.” Tonight, I am sitting alone. The last time I was listening to this song I was with my honey. We were just talking—”conversation” in the best sense of the word—continuing an ongoing dialogue about artistic production, about working overtime to create decolonized images of black folk when so often the means of production are in the hands of those who ain’t even thinking about decolonization. We are stealing a feel or two and sharing our dreams about the work we do—where we want to see it go. We are talking about Fanon and the issue of whether or not black folks have any “ontological resistance to the white gaze.” Sometimes we stop our talk to watch the light in the room, the shadows. He makes films and is into thinking about light.

His work is always so way out there he does not have to struggle to get folks to take him seriously—to see him as someone who thinks deeply about the world, whose vision moves with and beyond the need for political justice. Even though much of his work deals with radical black subjectivity, he is not seen as hung up about race. In my critical essays I am always talking about white supremacist capitalist patriarchy. Nobody accuses him of lingering too long on the “feminist” trip. Me—I’ve grown accustomed to being looked at through a narrow lens by most folks.

Whether it’s the black women who “trash” me for folks giving my work just too much “play” (even though these same folks rarely talk about the significance of the work or why lots of readers are into it and never trash black male peers who get mega-bucks and mega-play) or those who have read one of my fifteen books and think they know everything there is to know about me, from childhood on I have had to struggle to break from the impositions of images that don’t represent me accurately or well. Most folks don’t seem to want to believe that one can be struggling for justice and into nuanced cultural perspectives, aesthetics, and the vernacular at the same time. I have to constantly resist the censorship and silencing that my self-declared enemies hope will be the outcome of attacks and dismissals. Even though this is a drag, it too is part of the struggle—part of the process of decolonization.

The struggle to “be myself” in all the complexity of my being has been waged on the homefront and in the public world. During my first year in college I was always hanging out with a white hippie with long hair and a bright red beard who played bluegrass. One evening in the wee hours of the night as we were taking a midnight stroll on what appeared to be vacant streets, five black males walked up to me, pushing me into a dark corner where they taunted me with the question, “Nigger gal, what you doin’ with a white man—who do you think you are.” I was too startled to speak. And even if I had found my voice, had found the words, I could not have answered the question. It was a question I used to hear as a girl whenever I in any way transgressed the boundaries of the rules set by a solid working class religious intact patriarchal black family.

That question has haunted me over the years whenever I have said or done things that break with bourgeois decorum; whenever I have been a rebel with a cause that requires breaking rules and speaking against the imposed silences. As an intellectual and critical thinker, I have always wanted to follow wherever my mind and heart lead me. I have not wanted to get stuck in absolutes. I have wanted to be always “existentially self-reflective”—those are philosopher Cornel West’s words. Back in the day when we were not well-known public intellectuals, but dissenting critical thinkers who liked to play music and dance and talk ideas way into the night, this was his playful taunt. Then, neither of us wanted to be hemmed in by bourgeois etiquette and rules. We wanted to be “cool,” “down.” Academia was where we worked but we wanted a life on the outside. We did not want to be imprisoned in institutions of higher learning that would reward us and then demand that we stop being outlaws—that we stop stepping out on the edge.

It takes courage and critical vigilance not to conform. It takes knowing the rules of the game, how to play and win, as well as finding strategies to win without compromising in ways that violate or destroy the integrity of your being. Years ago, when I did not have tenure, I naively imagined that after tenure, after job security, it would be possible to just be myself, do my thing, play the game the way it suits me. I know better now. I know that outside pressure to conform never stops, that there are myriad ways those in power who don’t like what you do can make coming to work hard and stressful. Now that I am a Distinguished Professor at the very top of the corporate academic mountain, the pressures intensify, as does the sense of isolation. How wrong I was to imagine that there would be “freedom” at the top. There is definitely more money at the top, more perks, but this rarely translates into greater freedom.

My desire to leave academic work has intensified not only because of the way its conventions restrict creativity in the classroom, but also the way it restricts the mind—the way intellectuals think and write outside the classroom. To a grave extent the academy has always been so similar to the dysfunctional patriarchal family hierarchy that hemmed me in as a child that I feel that I can never be truly healthy—well and whole in the deepest sense—without leaving it. Like my family of origin it has offered a place to settle and collect myself, even as it has sought to limit and confine that self.

In the endless work and play of doing my own thing, I am sometimes assailed on all sides. Mama and daddy don’t like what I do—putting their business in the streets. According to one black woman feminist, “Black women academics don’t like me.” When I go to lecture I am more likely than not to be told that I am not at all like the image created by gossip and rumor— that I am not “difficult.” And being single it’s hard on the romance front (most bodies come to me having heard more about me than I have heard about them).

At the end of the day though, despite all the hassles and bullshit, I am a lucky “girl.” ‘Cause I walk the paths I need to walk, and always write only what I need to say. As a soul in this world seeking to fully self-actualize, I feel free. I know who I am. I know I like to go the distance, to go all the way. I know I have the courage to transgress when necessary without making a virtue or a fetish of transgression.

I write with intensity, discipline and constancy, because this is the work that calls me—the vocation of my heart. The writing I do is always meant to serve as critical intervention, as resistance. Balancing the desire to have work meaningfully touch relevant issues without, as well as always reflect artistic expression and integrity within, is not an easy task. While much of my cultural criticism challenges representations that reinforce existing structures of domination, it also offers new and different representations. The work then is always part of our struggle for liberation.

Much of that struggle begins with challenging sexist and racist stereotypes that offer such a flat vision of black female identity. Since practically everyone is socialized to expect certain stereotypical behavior from black females (including black females), one of the most useful interventions has been feminist critical discussion that both defines what the imposed stereotypes are and offers both strategies of resistance and alternative ways to construct self and identity. Even though more black females than ever before are critical of sexism, this does not mean that they are embracing feminism or a critique of gender roles in all aspects of life. For example: the idea that black women are “stronger,” more capable of withstanding abuse than other groups of women, has been continually challenged by feminist thinkers. Even so, black women across class, along with everyone else, continue to embrace this image.

In the worst ways, mass media offered—and continue to offer—a vision of feminism to the public that suggested it was a movement for equal rights that would make women be like men. The fact that the feminist movement was equally critical of male identity formation within patriarchy was rarely given attention in the media. Clearly, the aspect of reformist feminism most people could understand was the insistence on equal pay for equal work. Coupled with that was the stereotype of women become pseudo-men. In the final analysis, mass media and the mass public have shown a willingness to embrace women acting like patriarchal men while they eschew feminist attempts to transform male and female roles.

bell hooks describes herself as a "Black woman intellectual, revolutionary activist." A leading cultural critic and thinker about such issues as feminism and race, bell hooks has published more than twenty books, including All About Love: New Visions.