Pema Chödrön on the brilliance of the seemingly counterintuitive Buddhist practices of tonglen and mind-training with lojong slogans. 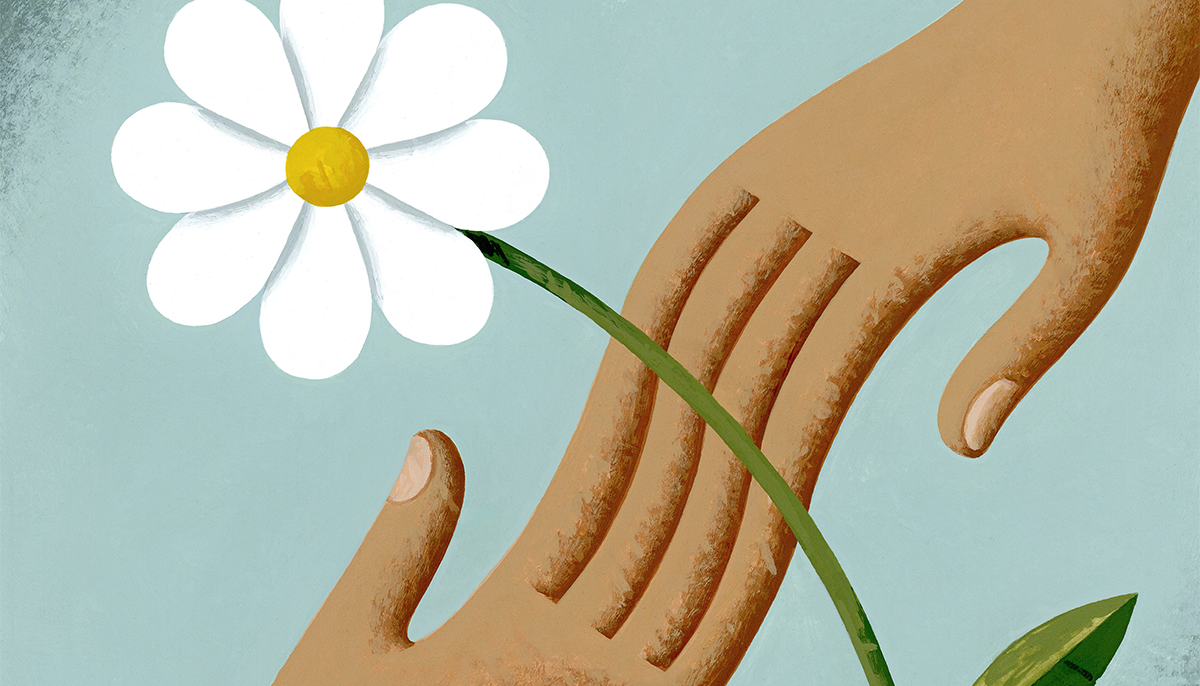 The slogan “Begin the sequence of taking and sending with yourself” is getting at the point that compassion starts with making friends with ourselves, and particularly with our poisons—the messy areas. As we practice tonglen—taking and sending—and contemplate the lojong (mind training), gradually it begins to dawn on us how totally interconnected we all are. Now people know that what we do to the rivers in South America affects the whole world, and what we do to the air in Alaska affects the whole world. Everything is interrelated—including ourselves, so this is very important, this making friends with ourselves. It’s the key to a more sane compassionate planet.

If you have rage and strike out, rather than surrendering to yourself and allowing yourself to see what’s under all that rage—especially if you feel very justified in striking out—it’s really you who suffers. The other people and the environment suffer also, but you suffer more because you’re being eaten up inside with hatred, causing you to hate yourself more and more.

When you have an addiction and you get to fulfill that addiction, there is a moment in which you feel some relief. Then the nightmare gets worse.

We strike out because, ironically, we think it will bring us some relief. We equate it with happiness. Actually there usually is some relief, for the moment. When you have an addiction and you get to fulfill that addiction, there is a moment in which you feel some relief. Then the nightmare gets worse. So it is with aggression. When you get to tell someone off, you might feel pretty good for a while, but somehow the sense of righteous indignation and hatred grows, and it hurts you.

On the other hand, if we begin to surrender to ourselves, begin to drop the storyline, and experience what all this messy stuff behind the storyline feels like, we begin to find bodhicitta, the tenderness that’s under all that harshness. By being kind to ourselves, we become kind to others. By being kind to others—if it’s done properly with proper understanding—we benefit as well. So again, the first point is that we are completely interrelated. What you do to others, you do to yourself. What you do to yourself, you do to others.

Start Where You Are

As we begin to practice shamatha meditation, following our breath and labeling our thoughts, we can gradually begin to realize how profound it is just to let those thoughts go, not rejecting them, not trying to repress them, but just simply acknowledging them as violent thoughts, thoughts of hatred, thoughts of wanting, thoughts of poverty, thoughts of loathing, whatever they might be. We can see it all as thinking and can let the thought go and begin to feel what’s left. We can begin to feel the energy of our heart, our body, our neck, our head, our stomach—that basic feeling that’s underneath all of the storylines.

If we can relate directly with that, then all of the rest is our wealth. It isn’t that lead gets transformed into gold, but that the poison already is the medicine. You don’t actually have to transform anything. Just simply letting go of the storyline is what it takes, which is not that easy. That light touch of acknowledging what we’re thinking and letting it go, that’s the key to connecting with this wealth that we have. So with all the messy stuff, no matter how messy it is, just start where you are, not tomorrow, not later, not yesterday when you were feeling better, but now. Start now, just as you are.

Demons Took Over The Joint

Milarepa is one of the lineage holders of the Kagyu lineage of Tibetan Buddhism. Milarepa is one of the heroes, one of the brave ones, a very crazy, unusual fellow. There’s a story about the main turning point in his life. He was very much a loner and lived in caves by himself and meditated wholeheartedly for years and years and years. He was extremely stubborn and determined. If he couldn’t find anything to eat for a couple of years, he just ate nettles and turned green, but he would never stop practicing.

One evening Milarepa returned to his cave after gathering firewood. He went back to his cave only to find out it was filled with demons. They were cooking his food, reading his books, sleeping in his bed. Basically, they had taken over the joint. He knew about nonduality of self and other, but he still didn’t know quite how to get these guys out of his cave.

Even though he had the sense that they were just a projection of his own mind, and that they were all the unwanted parts of himself, he didn’t know how to get rid of them.

So first he taught them the Dharma. He sat on this seat that was higher than they were and talked about compassion and shunyata and how poison is medicine. Nothing happened. The demons were still there. Then he lost his patience and got angry and ran at them. They just laughed at him. Finally he gave up and just sat down on the floor, saying, “I’m not going away and it looks like you’re not either, so let’s just live here together.” At that point, all of them left except one. Milarepa said, “Oh, this one is particularly vicious.” We all know that one. Sometimes, we have lots of them like that. Sometimes we feel that’s all we’ve got. He didn’t know what to do, so he surrendered himself even further. He walked over and just put himself right into the mouth of the demon and said, “Just eat me up if you want to.” Then that demon left too. The moral of the story is, when the resistance is gone, so are the demons.

As unwanted feelings and emotions arise, you actually breathe them in and connect with what all humans feel.

That’s the fundamental underlying logic of tonglen practice and also of lojong altogether. When the resistance is gone, so are the demons. It’s like a koan that we can work with by learning how to be more gentle, how to relax, and how to surrender to the situations and people in our lives.

Having said all of that, now I’ll talk about tonglen. I’ve noticed that people generally eat up the teachings, but when it comes to having to do tonglen, they say, “Oh, it sounded good, but I didn’t realize you actually meant it.” In its essence, this practice of tonglen is that when anything is painful or undesirable, you breathe it in. That’s another way of saying you don’t resist it. You surrender to yourself, you acknowledge who you are, you honor yourself. As unwanted feelings and emotions arise, you actually breathe them in and connect with what all humans feel.

We all know what it is to feel pain in its many guises. This breathing in is done for yourself, in the sense that it’s a very personal and real experience, but simultaneously there’s no doubt that you’re at the same time developing your kinship with all beings. If you can know it in yourself, you can know it in everyone. If you’re in a jealous rage and it occurs to you to actually breathe it in, rather than blame it on someone else, if you get in touch with the arrow in your heart, it’s quite accessible to you at that very second of time that there are probably seven hundred million people all over the world feeling exactly what you’re feeling. This practice cuts through culture, economic status, intelligence, race, religion. People everywhere feel that kind of pain—jealousy, anger, being let out, being lonely. Everybody feels that exactly the way you feel it.

By the same token, if you feel some sense of delight—if you connect with what for you is inspiring, opening, relieving, relaxing—you breathe it out, you give it away, you send it out to everyone else. Again, it’s very personal. It’s your feeling of delight, your feeling of connecting with a bigger perspective, your feeling of relief or relaxation. If you’re willing to drop the storyline, you feel exactly what all other human beings feel. It’s shared by all of us. In this way if we do the practice personally and genuinely, it awakens our sense of kinship with all beings.

The other thing that’s very important is absolute bodhicitta. In order to do tonglen, we’ve first established the ground of absolute bodhicitta because it’s important that when you breathe in and connect with the vividness and reality of pain, there’s also some sense of a lot of space. There’s that vast, tender, empty heart of bodhicitta, your awakened heart. Right in the pain there’s a lot of room, a lot of openness. You begin to touch in on that when you relate directly to the messy stuff. It’s said that the reason space begins to open up when you’re willing to relate directly with the messy stuff, is that it’s completely undoing or turning around the way ego holds itself together.

When we relate directly in this way to the unwanted areas of our lives, the small, dark room of ego begins to be ventilated.

We shield our heart with an armor woven out of very old habits of pushing away pain and grasping at pleasure. We push away what’s unwanted and grasp what’s wanted. When you begin to breathe in the pain instead of pushing it away, you begin to open your heart to what’s unwanted. When we relate directly in this way to the unwanted areas of our lives, the small, dark room of ego begins to be ventilated.

In the same way, when we open up our clenched hearts and let the good things go—radiate them out and share them with others—that’s also completely reversing the logic of ego, which is to say, reversing the logic of suffering. So lojong logic is the logic that transcends mess and unmessy, transcends pain and pleasure. Lojong logic begins to open up the space and it begins to ventilate this whole cocoon that we find ourselves in. Whether you are breathing in or breathing out, you are opening the heart, which is awakening bodhicitta.

From Be Grateful to Everyone: An In-Depth Guide to the Practice of Lojong by Pema Chödrön. Reprinted by arrangement with Shambhala Publications, Inc. Boulder, CO.