Dexter Cohen Bohn examines how the police killing of Breonna Taylor awoke the beginnings of a repatterining of justice in the American judicial system, and the work still to come. 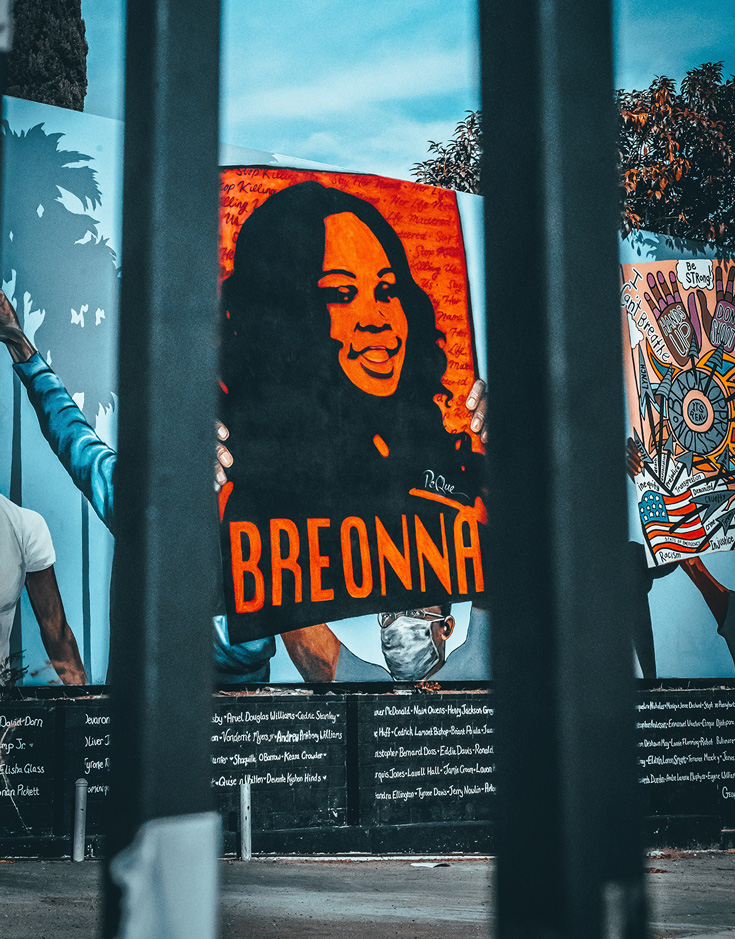 “Breonna Taylor should be alive today.” U.S. Attorney General Merrick Garland solemnly spoke those words at a news conference on August 4, 2022. At the same news conference, he announced new federal charges leveled against four police officers involved in the botched raid that led to Taylor’s death in March of 2020.

The tragedy of Taylor’s case has brought into sharp focus the failure of American justice to hold law enforcement accountable for extreme violence committed against civilians, especially people of color.

Successful convictions and the ratification of key legislation are needed to concretize the momentum of Black Lives Matter into a new edifice of American justice.

From a Buddhist perspective, this federal intervention indicates the fruit of a penetrating reflective process that seeks to break the conditioned cycle of violence and suffering that deprived Breonna Taylor, and so many like her, of rights supposedly held unalienable to every American heart.

Utilizing the Four Noble Truths as an analytical framework, a deep-seated culture of impunity emerges as one root cause of injustice which the American public has come to expect from a judicial system notorious for letting officers off the hook.

On March 13, 2020, Breonna Taylor was shot six times by officers who knocked down her door while executing a search warrant for narcotics. Suspecting intruders, Taylor’s boyfriend shot one of the officers in the leg as they entered; the police returned a frenzy of fire that struck Taylor and sent multiple bullets into a neighboring apartment.

After more than six months of investigation and more than 100 continuous days of protest in Louisville, a Kentucky grand jury indicted just one of the officers involved for wanton endangerment. In March 2022, that officer, Brett Hankison, was acquitted of all charges. No charges or acknowledgment of Taylor’s death were mentioned in the court proceedings, sparking nationwide demonstrations and violent clashes with police.

The court’s decision came days after the city of Louisville reached a $12 million settlement in a civil lawsuit filed by Taylor’s family for her wrongful death. The city’s agreement included adoption of sweeping reforms across its law enforcement department, including “Breonna’s Law,” which bans the use of no-knock warrants.

While this sizable settlement represents an important affirmation of the wrong committed against Breonna Taylor and a municipal pledge for structural change, monetary restitution and hindsight policies do not in themselves constitute justice.

Publicly announcing the results of the grand jury proceedings, Daniel Cameron, Kentucky’s first African-American attorney general, stated that his office “did everything we possibly could to uncover every fact.”

While Cameron may have intended to inspire confidence with this statement, Buddhists will recognize an inherent tension, if not arrogance, in such a claim. Reflection on the Second Noble Truth reminds us that causes and conditions are innumerable; to know them all is a truly cosmic task. Thankfully, the inquiry did not end in Kentucky.

Following a two-year federal investigation, the Department of Justice formally accused three previously unknown officers of intentionally including false information in an affidavit used to justify the raid. Civil rights offenses, unlawful conspiracy, unconstitutional use of force, and obstruction of justice were all cited as crimes connected to Taylor’s death. One ex-officer, Kelly Hannah Goodlett, pleaded guilty this August. Brett Hankison, the previously acquitted ex-officer, was also charged in a federal indictment and will be tried in October 2022.

The dismal picture of willful deceit that these new charges reveal are a testament to the power of concentrated inquiry honed toward the root cause of injustice.

And yet, the question must now be asked: What factors conditioned this deviant behavior?

In pursuit of clarity, the broader context of accountability in policing comes into view. Approximately 1,000 people are shot and killed by law enforcement every year, according to Philip Stinson, head of the Police Integrity Research Group and professor of criminal justice at Bowling Green State University. Of these fatal shootings, roughly eight officers are arrested and charged annually with either murder or manslaughter. Fewer than half of these cases end in a conviction.

Stinson further notes that “surprisingly little is known about the crimes committed by law enforcement officers, in part because there is virtually no official nationwide data collected” (Police Integrity Lost). This is due to the fact that reporting is voluntary and many police departments fail to participate.

These facts are evidence of an ingrained culture of impunity that has infected law enforcement institutions from the local level up, thereby weaving itself into the very fabric of America’s so-called justice system. If basic accountability protocols, such as accurate reporting and appropriate consequences, are not structurally integrated, flagrant abuses of power will continue to remain unchecked.

While this pattern of intentional ignorance has, so far, gone underreported and largely unprosecuted, structural tides are beginning to shift. The George Floyd Justice in Policing Act (H.R. 7121) is one salient example of lawmakers attempting to right these wrongs on an institutional level. The bill, which passed the House in March 2021, proposes to “increase accountability for law enforcement misconduct … enhance transparency and data collection, and establish best practices and training requirements.” In essence, H.R. 7121 lays out a comprehensive vision of Right Conduct in policing that hinges upon a foundational realignment with integrity as the necessary cornerstone of trust-based law enforcement.

Without doubt, the federal indictments announced in connection with Breonna Taylor’s case represent an important step in a new direction of justice. Uprooting the systemic corruption that has failed to hold any officers accountable for her death is a task which necessitates penetrating observation and principled action. So far, the Department of Justice has demonstrated these qualities, marking the first time in American history that police officers have been charged on the federal level for killing a Black woman.

This is undeniable progress but not an end in itself. Successful convictions and the ratification of key legislation are needed to concretize the momentum of Black Lives Matter into a new edifice of American justice.

Driving this sentiment home, legendary Black civil rights activist John Lewis struck a Bodhisattvic chord when he addressed Congress just three weeks before his passing: “While we use our speech to advance American ideals such as freedom, liberty, and justice for all, we must use our hands to implement these values. H.R. 7121 puts us on the right path” (Legistorm.com).

Dexter Cohen Bohn is a British/American social activist and Communications Coordinator at the International Network of Engaged Buddhists (INEB) based in Bangkok, Thailand.