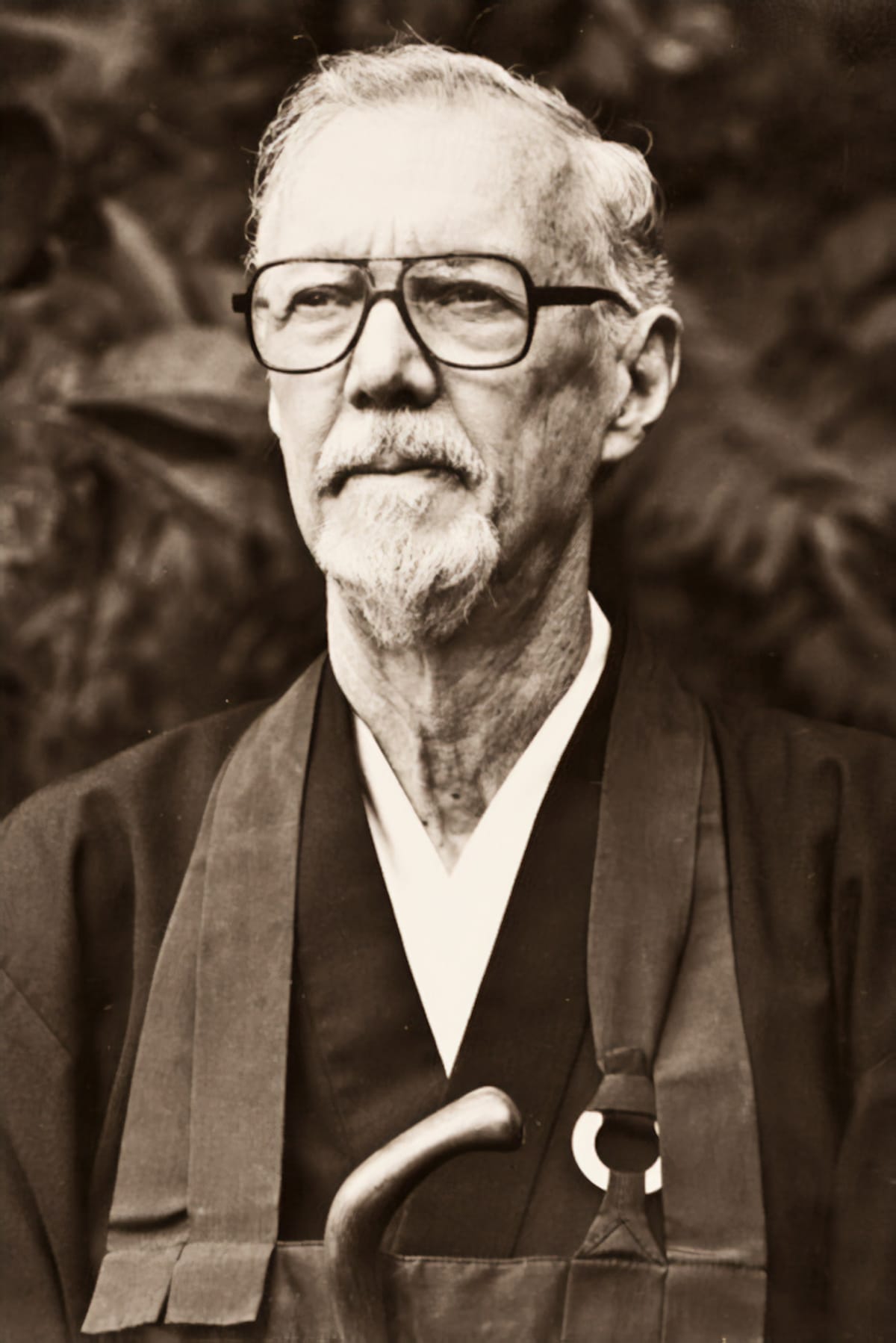 James Ishmael Ford tells the story of the great teacher Robert Aitken, who died in 2010 at age 93.

Robert Aitken was, without doubt, one of the most truly venerable elders of the Western Zen way.

Aitken was born in Philadelphia in 1917. When he was five years old, his father accepted an appointment as an ethnologist at the Bishop Museum in Honolulu. Except for a year and a half in California during high school, he was raised entirely in Hawai’i. Before the outbreak of World War II, he spent two and a half years at the University of Hawai’i. Then, taking a break from his university career, Robert took a fateful job in Guam.

In 1941, the day after Pearl Harbor was bombed, he was captured by the invading Japanese Army and spent the entire war in various civilian internment camps in Japan. Fortunately, at some point a guard loaned him a copy of R. H. Blyth’s Zen in English Literature and the Oriental Classics. Fascinated by Blyth’s book, Robert reread it so many times the guard became afraid he’d break its spine and so reclaimed it. But through a fateful coincidence he and Blyth himself were transferred to the same camp. Robert took advantage of this opportunity to start the intellectual aspect of what was to become a formidable Zen training.

After the war, Robert returned to Hawai’i and completed his undergraduate degree in English literature. He then moved to California where he met Nyogen Senzaki, the itinerant Zen teacher who was leading his “floating Zendo” in various rented venues up and down the California coast. Senzaki Sensei gave Robert the Dharma name Chotan, which means “Deep Pool,” and introduced him to koan study.

He returned to Hawai’i where in 1950 he earned a master’s degree in Japanese studies. The year before, Robert had helped put on the East-West Philosopher’s Conference, at which he met and began what would be a lifelong friendship with D.T. Suzuki. Also in 1950, he made his first visit to Japan since his time as a prisoner of war. There he began studying with Rinzai master Soen Nakagawa Roshi.

After traveling for a time between Hawai’i and California, during which time he married and divorced, Robert landed a job teaching at Jiddu Krishnamurti’s Happy Valley School in Ojai. There he met Anne Hopkins. They married and traveled together to Japan for their honeymoon. While there, Robert again sat with Soen Roshi and also met Yasutani Roshi. In 1958, when Soen Roshi came to California to preside at Nyogen Senzaki’s funeral, Robert served as the teacher’s jisha, or attendant.

“His deeper understanding was eventually confirmed […] long after he had been successfully engaging in koan study and demonstrating his abilities as a teacher in his own right.”

He had his first intimations of what Zen is about during a sesshin in 1961. But his teacher Soen Roshi was reluctant to confirm it as more than “a little light.” His deeper understanding was eventually confirmed by Soen Roshi in 1971, long after he had been successfully engaging in koan study and demonstrating his abilities as a teacher in his own right.

Over time Aitken worked with a number of teachers, but his principal guides were first Yasutani Roshi and then Yasutani’s successor Ko’un Yamada Roshi. In 1974, Yamada Roshi conferred Dharma transmission on Aitken Roshi. Hesitant to accept the responsibility and unsure of himself in many ways, Aitken Roshi traveled to California where he spent some time reviewing koans and deepening his insight with Maezumi Roshi. As mentioned earlier, Maezumi Roshi’s generosity of spirit launched Aitken Roshi into what would become one of the most widely respected Zen teaching careers in North America.

In 1959 he and Anne established the Koko An Zendo. This was the nucleus of what would become the Diamond Sangha network, with centers on several Hawai’ian islands and in California, Arizona, Texas, Washington State, Germany, Argentina, Australia, and New Zealand. In Australia, working with his senior student and Dharma heir, John Tarrant, he’s built the Diamond Sangha into the largest Zen organization Down Under.

Aitken Roshi would become one of Western Zen’s foremost social justice activists. He was a founder, with another of his senior students Nelson Foster—along with Anne Aitken, Thich Nhat Hanh, poet Gary Snyder, deep ecologist Joanna Macy, Pure Land exponent and priest Al Bloom, and others—of the Buddhist Peace Fellowship. Among the ten plus books written by Aitken Roshi, Taking the Path of Zen is a classic and seminal to many starting the Zen way, and his Mind of Clover is still considered the best book on Buddhist ethics. These books should surely be read by every beginning Zen student.

Aitken Roshi retired in the late 1990s, first to Kaimu on the Big Island of Hawaii, then to Honolulu, then an assisted living facility in Hawaii Kai, before moving back to the Diamond Sangha’s Palolo Zen Center in Honolulu, where he spent his final years. He died on August 5, 2010. The Diamond Sangha network is led by a teacher’s circle consisting of his Dharma heirs and their successors. Aitken’s principal heir is Nelson Foster Roshi, a noted social justice activist, writer, and editor of one of the two most important anthologies of ancient Zen teachings currently available in English, Roaring Stream: A New Zen Reader (the other is Andy Ferguson’s Zen’s Chinese Heritage). Foster Roshi guides Ring of Bone in North San Juan, California.

Adapted from Ford’s Zen Master Who? with permission from Wisdom Publications.