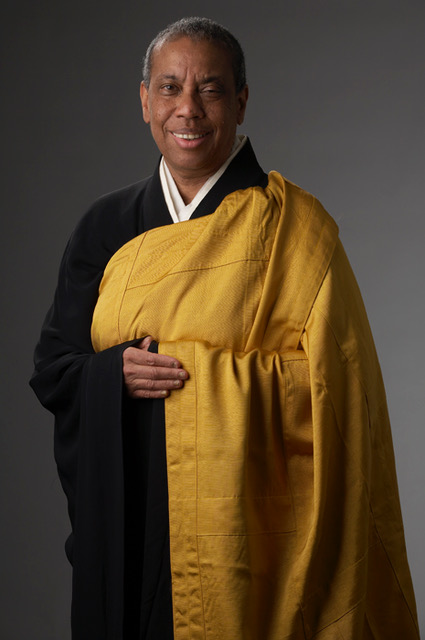 Roshi Merle Kodo Boyd (1944-2022) passed peacefully at her home in Durham, NC, on Sunday, February 20, 2022. A Zen Buddhist priest and teacher, she was beloved for her keen wisdom, gentle kindness, and big love. Possessed of a fierce and independent spirit, Boyd was the first fully transmitted African American Zen teacher in the United States. Her life as a Black woman, particularly those experiences that shaped her throughout her childhood in a segregated but nurturing community in Houston, TX, and her life in the buddhadharma were intimately interwoven. She was of fond of saying, “You can’t fall out of your life.”

Boyd first began Zen sitting on her own in the 1980s, when a picture of a Chinese painting of a solitary angler awakened a deep recognition in herself. She sat alone for a few years before traveling to Yonkers, NY, to study at the Zen Community of New York, led by Roshi Bernie Glassman and Roshi Sandra Jishu Holmes. Boyd received jukai, the Buddhist precepts, and tokudo, ordination as a Zen Buddhist priest, from Holmes in 1996. Around that time, she met her Zen teacher Roshi Egyoku Nakao and began making extended trips to the Zen Center of Los Angeles for study and training. In 1994, with two other practitioners, Bill Nordahl and Peter Nyodo Ott, she co-founded the Lincroft Zen Sangha in New Jersey, for which she remained the Guiding Teacher at the time of her passing. In 2002, Boyd completed her Priest training and was empowered by Roshi Nakao in 2006 as a Zen Teacher in the Maezumi/Glassman line of the White Plum Zen lineage. In 2011, Boyd served as the Abbot Seat Holder of ZCLA during Nakao’s sabbatical year. In 2015, she received Inka (Seal of Approval) and the title Roshi. Boyd was also active in interfaith dialogue and travelled together with her teacher to Bearing Witness Retreats at Auschwitz Berkinau, the Native American Retreat, SD, and at the Tule Lake Japanese-American Concentration Camp in California.

Boyd received a Master’s Degree in Early Childhood Education from New York University and a Master’s Degree in Social Work from Hunter College in New York City. She worked as a clinical social worker and therapist, primarily with veterans of the Vietnam War in Middletown, NJ. She is survived by her husband, Ken Boyd, daughter Malaika, and her many Dharma brothers and sisters.