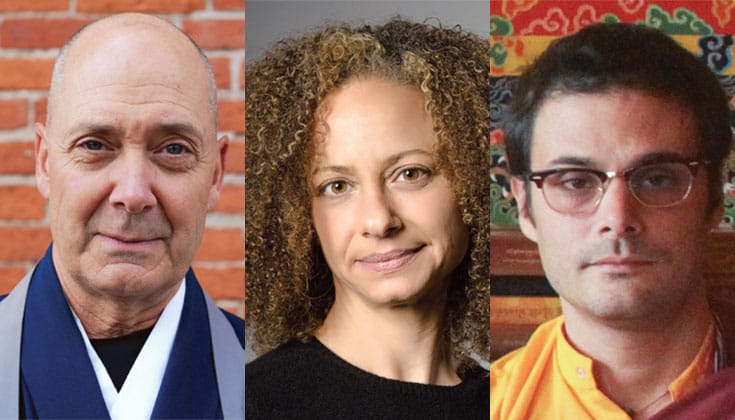 Question: I’m addicted to pornography; I have been for a long time. I have good days in my practice, but often I end up bringing pornography into my meditation, and once it begins, it’s hard not to stay with it. Is meditation even a good idea for me? Or am I someone who should spend less time in his own head, away from these kinds of thoughts?

Bodhin Kjolhede: Indeed, we should all spend less time in our head. And we need meditation to do that.

The pivotal issue, always, is attention: how we are using—or misusing—it. From moment to moment, it is our privilege as human beings to have choice in where to direct our attention. It is like holding a flashlight in a dark room—with a flick of the wrist, we can aim that beam of attention up, down, or side to side. When we notice that the beam has drifted into thoughts or images, whether of pornography or politics, food or family members, we find freedom simply by redirecting it to the practice we’re working on.

Easier said than done. First we have to notice that our attention has wandered, and that can take a while. A whole round of sitting can go by—and much longer when we’re not sitting—without our noticing that we’re lost in thought. More problematic still is when we do notice but choose to linger in the thoughts. And why would we do that? Because we’re basically addicted to our thoughts. This, not the content of the thoughts, is the core issue.

If you’re in a retreat and you find yourself getting stuck in pornographic or other tenacious mind states, see the teacher. She or he will provide a reality check, starting with the reminder that since those mental formations have no substance, you should avoid either clinging to them or fighting them. If you don’t have access to a teacher, you can develop self-awareness skills through participating in a porn-addiction support group or supervised group therapy. Best of all is to do this while maintaining daily meditation.

JoAnna Hardy: You’re not alone. Working with sensual desire (at varying degrees, flavors and intensities for different minds) is a normal part of our practice. There is a common misconception that our practice is supposed to be sterile and “thoughtless” and that somehow when we sit on the cushion, our everyday habitual thought processes will end and an enlightened mind will show up. I’d like to debunk that myth. Who we are in life, what we think about, and our actions all join us on the cushion. When you say, “I end up bringing pornography into my meditation,” well, of course you do! Our minds are really honest. What’s important is how we decide to look at what comes up.

In the Cittapariyandana Vagga Sutta, the Buddha acknowledges, “Both men and women would find no better sight, sound, smell, or touch than that of one to whom they are sexually attracted.” The power of sexual energy was not lost on him. There are many stories in the suttas in which the armies of Mara, the tempter, visit the meditating Buddha and attack his sense desires.

Meditation is a good idea—for you and all of us humans who have incessant or obsessive thoughts. I look at practice in two ways when dealing with a tenacious mind. First, we don’t have to take it personally. Thoughts happen; the practice instructs us to recognize, not judge, the mind’s process. Second, there is a way out—and the practice is about retraining the mind toward that potential. The mind does not get to be the boss in our practice. If we find our lives and relationships really sucking because we can’t control our thoughts or actions, this practice gives us the opportunity to redirect our untrained habit mind from unwholesome/unskillful to wholesome/skillful. Ask yourself, is this thought true? Does it have to control me?

In your case, knowing that you contend with the mind’s Mara of slipping into sexual fantasy, it would be wise to work with the practice of right effort. The Buddha stresses the need for effort, diligence, exertion, and unflagging perseverance, the tools with which we can change the thought patterns that keep us stuck and out of reach of freedom. The suttas state that “we can prevent the arising of unarisen unwholesome states”; if we’ve missed that chance, “we can abandon unwholesome states that have already arisen.” Often, sexual fantasy is trying to pull us away from boredom; the mind tends to want to entertain us. Knowing this is key to not letting that part of the mind win. At the beginning of your sit, set the intention to stay with a steady object, perhaps the breath. Every time you notice the mind wandering, return to the steady object, knowing that the mind is in a rigorous retraining, maybe even a marathon. The work of self-cultivation is not easy but also not impossible. And there is no one who can do it for us but ourselves.

One last thing: The pornography industry can be seen as unwholesome, supporting exploitation, abuse, and addiction; part of your work, then, is to ask yourself if you are participating in oppression. The reflection is “Am I causing suffering to myself or others?”

Justin Von Bujdoss: I hear how intense this experience is for you and am moved by your clarity and desire to find something that works in your practice. I think that meditation can still be meaningful. But you may need to change things up a bit.

In the biography of Milarepa, close to the end, Milarepa is on his deathbed after having been poisoned, and one of his students comes up to him and says, “Teacher, you are such an ideal practitioner—you have manifested the act of transforming all the negative karma of killing so many people with black magic and have reached enlightenment. Surely you are the reincarnation of a great master. Can you please tell us who that was?” Milarepa, explains that when you think like that, you are removing the power from the person who practices as well as the power of the practices themselves. This, for me, is the power of Milarepa’s story—the message that you are always enough to manifest awakening through your practice.

You mentioned getting out of your head. It was the same for Milarepa. More or less orphaned as a child, he was indentured to his aunt and uncle, then pressured by his mother to murder them through black magic. He killed not only them but also his entire extended family and the angry mobs who come searching for him later. He spent years sifting through his remorse, the pain of what he did, and his sadness and feelings of worthlessness. It took meeting his teacher, Marpa, to finally break through that obsessive thinking.

Marpa got Milarepa out of his head by putting him through physically trying tasks—by being tough with him and not giving him the room to hate himself. As a result, Milarepa’s perspective was able to shift. He wasn’t stuck anymore.

I often see dharma practitioners inadvertently place themselves in a story of how they should practice, even if it doesn’t feel appropriate for them. It feels spiritual, but not good, not empowering; definitely not liberating. In moments like this, practice can feel like a prison. When that’s the case, the important thing is to break free of it.

My practice is always changing because I am always changing. In my moments of getting stuck or hitting the wall, I usually get up, do something to shift myself, then do what feels appropriate in that moment, even if it doesn’t look like “practice.” In moments of frustration, I read biographies of the eighty-four Indian mahasiddhas—my role models on the path.

We are all awakened; the practice is finding that unique path that reveals this. What feels right for you?

JoAnna Hardy is co-guiding teacher at Against the Stream Buddhist Meditation Society.

Bodhin Kjolhede is abbot of the Rochester Zen Center in Rochester, New York.

Bodhin Kjolhede is abbot of the Rochester Zen Center and dharma successor to the late Roshi Philip Kapleau.

JoAnna Hardy practices in the Theravada Insight tradition, with a focus on teaching meditation in communities dedicated to seeing the truth of how racism, gender inequality, and oppression go hand in hand with the compassionate-action teachings in Buddhism. She is leader of the Lion’s Roar Online Learning course, How to Cultivate a Loving Heart: The Buddhist Practice of Metta.