We can control our fears—even primal fears conditioned by evolution and genetics. The key, says Jeff Greenwald, is the stories we tell ourselves, as individuals and as cultures. 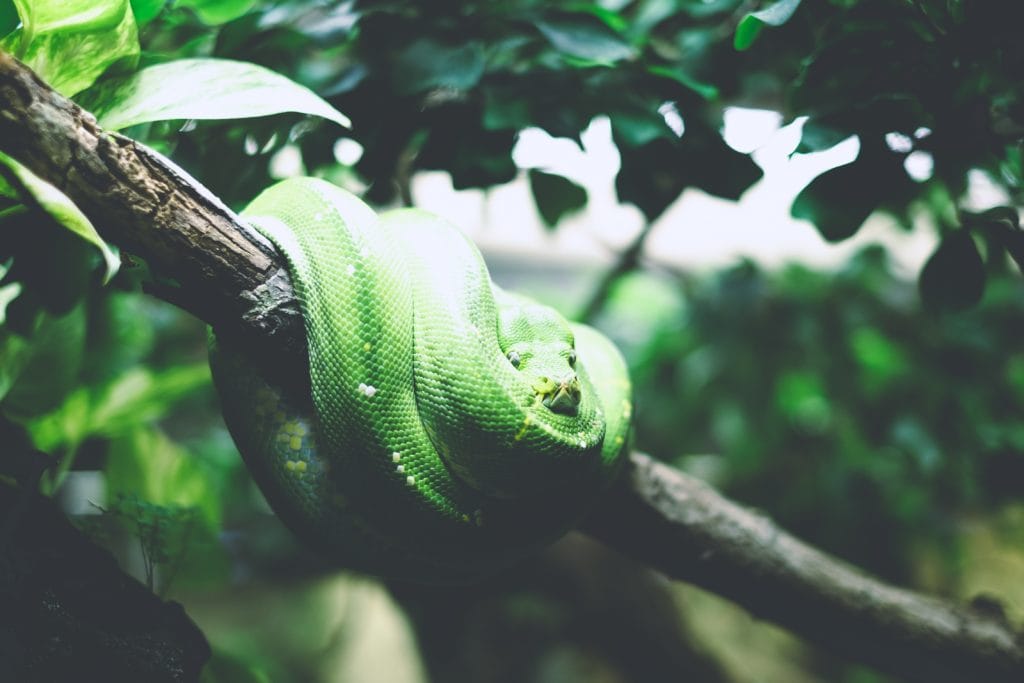 Last August, walking with a friend near the Point Reyes National Seashore, I spied a snake on the trail. It was a harmless creature (to humans, at least): a common Coast Garter, sunning itself beneath a blackberry branch. I turned to point it out to my friend, but he’d already seen it. He stood frozen, eyes wide, as if the lazy reptile might strike at any instant.

“I know,” he replied sheepishly. “It’s the ‘snake’ part that gets me.”

Fear is a strange thing. The United States sees about twelve deaths a year from snakebite, compared to 115 traffic fatalities every day. Very few people, however, express a phobia of cars.

The human relationship to suborder Serpentes is ancient and ambivalent. It ranges from the despised serpent of Eden to the honored nagas who bring Asia’s monsoon rains; from the reptiles entwined around the medical caduceus to the slithery antagonists in Snakes on a Plane. We may honor them or loathe them, but we’re always fascinated by them.

Since the early 1980s, my travels in South Asia have made me more aware of snakes and their very different roles across Eastern and Western cultures and mythologies. Why do they provoke such strong and varied reactions? My search for answers has helped me understand why cultural traditions around the world respond so differently to these amazing creatures.

As it turns out, there may be a biological reason for our widespread aversion to snakes. Recent studies by Lynne Isbell, a professor of anthropology at the University of California at Davis, suggest that critical aspects of human evolution—from our three-dimensional eyesight to our ability to perceive color— may be rooted in the tense relationship between Cretaceousperiod primates and these reptiles. The success of the primate order hung on our ability to recognize and avoid deadly snakes.

“That humans have been afraid of snakes for a long time is not a fresh observation,” Isbell says. “That this fear may be entwined with our development as a species, is.”

Whether or not predation pressure from snakes forced our primate brains to develop, humans have given serpents an unusually high place in our collective conscious.

John Emberton is one of the owners of the East Bay Vivarium, located near my home in northern California. Since 1970 the Vivarium has sold reptiles and amphibians to the general public, given educational programs, and helped people overcome snake phobias. I asked him the pivotal question: Why do people in the Hindu and Buddhist traditions generally treat snakes with respect and reverence, while those in the Judeo-Christian world tend to see them as frightening and evil?

Emberton shrugs. “Years ago, there was a poll done asking people why they hate snakes. Their answer, overwhelmingly, was ‘The Bible.’”

When we look for the root of our Western prejudice against snakes, it’s obvious how superficial (and misogynistic) it is. Our collective loathing seems to date back to that single morning in Eden, when a laudable episode of serpentine wisdom was cast as a duplicitous dare.

“Ignorance,” that canny snake told Eve, “may seem like bliss— but it’s also ignorance. God knows this, I know it, and that impressive brain of yours knows it, too. But don’t take my word; have a bite of this pomegranate.”

At which point Eve—whose defiant courage would be twisted into a betrayal of everything high and holy—helped herself.

What do we find distasteful in this scene? Do we really wish Eve had refused? Of course not. But something inside of us that clings to dependency—the lost innocence of the cradle— remains bitter. A snake got us banished from our little garden, and we’ve been bashing them with shovels ever since.

It’s not only the Eden myth, Emberton says, in which the serpent serves as a vehicle for Satan. It’s the whole mindset of Western religion. In the Old Testament, man was given dominion over the animals. The creatures of the earth and sea exist for us to use—or extinguish—at our whim. Hinduism and Buddhism, on the other hand, don’t afford humanity that right.

Emberton has a point. While an Asian pedigree doesn’t protect animals from harm (ask any rhino, elephant, or tiger), it does grant them an equal share in creation. From the Vedas to the Jataka Tales, the stories of Buddha’s past lives, all animals—snakes included—are capable of being generous, humble, and heroic. They have their own families, kingdoms, and moral codes.

Snake gods and goddesses—nagas and naginis—are ubiquitous characters in South Asian lore, bridges between the visible and elemental realms. They’re viewed with a combination of caution and playfulness, as befits their mercurial nature. Lord Vishnu, the Great Preserver of the Hindu trinity, dozes on the infinite coils of Ananta-Shesha for eight months of the year. Muchilinda Naga—a seven-headed cobra—rose to shelter Gautama Siddhartha, the Buddha-to-be, during his pivotal weeks of meditation on the banks of the Anoma River.

Snakes have a special place in Nepali culture. Nag Panchami, a holiday devoted exclusively to snake worship, is so ancient that it cuts across caste and religious boundaries. Families prepare ceremonial offerings of milk and tack colorful posters of serpents above their doorways, petitioning the noble reptiles for nourishing monsoon rains and protection from snakebite.

The relationship dates back to prehistory. Serpent deities inhabited the Kathmandu Valley aeons ago, when it was a vast inland sea. But the sea was ultimately drained by the bodhisattva Manjushri, forcing the nagas to relocate in small ponds and aquifers, the “snake lakes” that now dot the valley.

My favorite naga tale is set centuries ago, when a devastating drought parched the Kathmandu Valley. In desperation, Nepal’s king turned to a great guru named Shantikar. The Buddhist sage ordered his disciples to round up the cartel of nine nagas who controlled the monsoon rains and protected the earth’s bounty of underground treasures. But the nagas, still peeved by their eviction, were not eager to help. Especially reluctant was Karkot Nagaraja, their king. He had to be captured in a sack and carried to Kathmandu under protest.

But it is the nature of nagas to be generous. At last they complied, and rain filled the reservoirs. For this, the nagas were rewarded with a personal teaching from the great Shantikar himself. When the audience ended, the noble snakes bowed to the saint, and as a parting gift, they each drew portraits of themselves—using their own blood as ink. The paintings would serve as a kind of panic button, to be used at desperate times. When the images were worshiped, the snake gods promised, the crucial rains would fall.

While Eastern religion has always honored snakes, a cautious admiration for them was once part of Western culture as well. More than four thousand years ago— long before the Old Testament was compiled— a charismatic serpent appeared as Ningishzida, the Mesopotamian god of the underworld. Like the Asian nagas he was an earth spirit, and a patron of the trees.

Asclepius, the son of Apollo and Koronis, was the first physician in Greek mythology. His worshipers included Hippocrates, the pioneer of Western medicine. Asclepius’ first tutors were snakes; he watched them bring healing herbs to each other. This may explain why nonpoisonous snakes were allowed to slither around on the floors of ancient Greek hospitals (a practice since discouraged by the AMA). It may also explain how the Rod of Asclepius, entwined by a single serpent, became the symbol of medicine. And there’s a more ambiguous link between snakes and medicine: The earliest pharmaceuticals, which included venom, could be lifesaving or lethal, depending on dosage (and luck). A serpent thus provided a good allegory for the medical profession, with its mixed success rate.

The strangest nod to serpents that I’ve come across, in Western spirituality at least, is found in gematria, a form of Hebrew writing inspired by Greek geometry. In this mystical system of Jewish wisdom, each Hebrew letter is assigned a number. A common example is chai, which in Hebrew means “life” (as in l’chaim, “to life”). The two letters that make up the word have a combined value of 18, a highly auspicious number in Jewish tradition. Every word in Hebrew thus has an occult numerical value—and a strong (not to mention divine) relationship with words of identical values. It turns out that the numerical value of the word for “serpent” is 358: identical to the value for the word “messiah.”

Some Christians might bristle at this, but it makes perfect sense. Both snakes and messiahs, after all, are masters at the art of liberation. A snake literally sheds its skin, emerging as a rejuvenated being. A messiah offers the same opportunity, metaphorically: a chance to reinvent ourselves, and emerge with an overhauled soul. There’s even a biblical root to this bit of wordplay. In one of the more controversial passages in the Gospels (John 3:14-16), Jesus himself is compared to a bronze serpent that Moses displayed on a pole during the Exodus to cure victims of snake bite: “Just as Moses lifted up the snake in the desert, so the Son of Man must be lifted up, that everyone who believes in him may have eternal life.”

What these many and varied stories about snakes show, if nothing else, is that we have a surprising amount of control over our fears—even primal fears, conditioned by evolution and genetics. The key to this control seems to be the stories we tell ourselves, as individuals and as cultures. Sometimes, those stories trade one fear for another. If one believes what the Bible says, for example, fear of death is mitigated—but snakes become creatures of darkness.

A few days ago, at the Oakland Zoo, I stood by the snake enclosure and watched as parents brought their children up to the glass. Terror and fascination were common first responses, but the children usually calmed down when the parent read the descriptive notes about the reptile’s diet, lifestyle, and love of climbing trees.

It makes sense. In the West, the stories we’re read about bears, lions, monkeys, and elephants have tempered our fears about those sometimes dangerous animals, and motivated their protection and conservation. But there are almost no stories featuring benevolent snakes. My guess is that it will take the serpentine equivalent of Winnie the Pooh or Curious George to dispel our ancient loathing and welcome Ophidia out of exile.

Meanwhile, a few of us will continue to honor these iconic animals in our own way. Last week, walking alone in the Berkeley Hills, I saw a snake poised on the path ahead. Its head was held high; it seemed lost in thought. I felt a thrill pass through me, and crept forward to offer a few drops of my soy-based protein shake. This time, I was the one left feeling sheepish. It was only a stick.