Yoga practitioner Alison Wearing discovers how to appreciate the moment, even in the great white north. 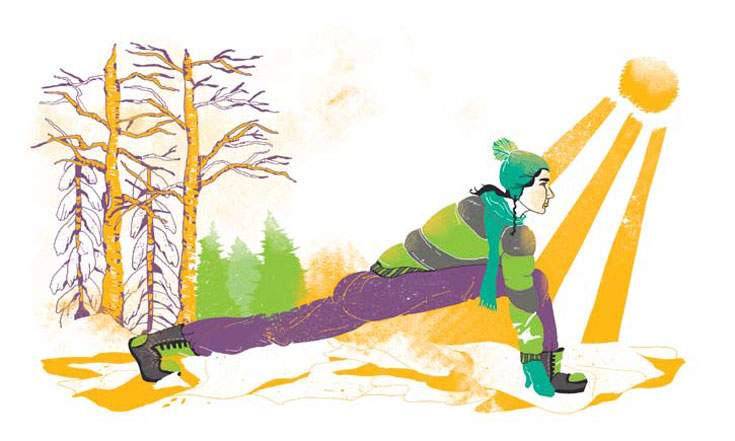 “Nothing is taken more for granted,” my stepfather told me one night after dinner, as bits of salad wilted on his plate and cancer crept through the marrow of him. “When you’re healthy, you don’t give it a second thought. You just spend all your time getting worked up about all kinds of other things,” he laughed, a quick smile cracking the stiffness of his face. No, it wasn’t a smile exactly, though his teeth were there. He stared at his plate, at the bits of green food he hoped would restore him, and he whispered, “Everything else you can do without, but if you don’t have your health, you have nothing.”

A few weeks later, my mother and I found him curled up on the carpet, his face smooth and blue with cold blood. When we pulled him up, he exhaled. Or so we thought. It was his last breath, trapped until our stirring released it, a sigh that was the last of him escaping.

That night I dreamed my stepfather had a ceramic face that smiled until it fell away in shards, until all that was left was a radiant joy—something between a light and a song.

This morning, years later, I can feel that light-song owing into me as I breathe, and I take a moment to honor my stepfather’s words and the casual miracle of my health. I don’t give a second thought to the soft power in my belly and the life in my bones; I give it my first.

The fire must have twisted itself to ashes during the night, while I glowed between wool, water, feathers, and dreams.

From there, I move to my pillow, a down-puff extravagance, a gift from last Christmas. Such bountiful softness, how lucky my head and neck are to be cradled there. I continue on to my feet, warm from the previous night’s hot water bottle, the same one I used as a child, when school nerves would turn my stomach to snakes and I was calmed by the weight of its warmth. My toes reach for the last traces of heat and I take delight in this small sensation before turning my attention to the bed that has housed my resting body yet again. I pat it—thanks, bed—then crawl my fingers across the weaving of Mexican wool against my body, especially delicious this morning, when the thermometer reads twenty below outside and a brittle forty-two degrees indoors. The fire must have twisted itself to ashes during the night, while I glowed between wool, water, feathers, and dreams.

Until recently, I awoke to bougainvillea and birdsong, the reliability of hot sunlight lifting over the neighboring mountains. For five glorious years, Mexico cooed me out of bed with the promise of papaya and mango, freshly roasted coffee from a friend’s garden, creamy ripe avocados, and cheese. There was the rustle of fringe-leaved banana trees and the seduction of flowers in every imaginable color—fuchsia, magenta, vermilion, azure. It was a culture more prone to dance than depression.

Recently we returned to rural Ontario, to the snow and the cold and a shy, reluctant sun. Here there are bare trees and a new color, gray—varieties of it everywhere. There’s silence—the stillness of ice and a long, annual death. And there are people less inclined to spontaneous fiestas than to going home, closing the door, and staying there.

It has been an adjustment, this move to the eastern shore of Lake Huron, a hundred and fifty miles northwest of Toronto. Since arriving here, my vocabulary has increased by two compound words: the first is “storm-stayed,” an adjective that describes the condition of being unable to go out due to excessive snowfall—prolonged whiteouts being a regular occurrence in this area. My son’s teacher once went to a friend’s house for dinner and was storm-stayed there for six days.

The second expression is employed when the buildup of snow in the center of the road is so high that the car’s body becomes suspended, its wheels spinning fruitlessly above the ruts on either side. She’s “belly-hung,” she is, and the driver probably storm-stayed—one condition lending itself quite naturally to the other. That’s charming from a linguistic vantage point and rather less quaint when it is twenty below, the wind is raging outside the car, there is no cellphone reception, no one has driven by in more than an hour, and a nearby house is a hope rather than a certainty.

I have a right to complain, I’m told by those who see the struggle of my transition. And I do for a while, cringing at the weather and the colossal, impersonal grocery store that has replaced my Mexican village marketplace, with its colorful sacks of spices and chilies, its volcanoes of fresh fruits and vegetables, its ancient women with long, grey braids selling eggs, wild berries, and flowers from their gardens. Shortly after returning to Canada, I visited my new northern supermarket and in the middle of aisle ten, the one devoted entirely to the myriad relatives of the potato chip and its cousin, the carbonated beverage, I laid my forehead on the handle of my shopping cart and briefly wept.

I could go on.

But I also have a right to be happy, as my mother pointed out one day on the telephone. “Why complain when you could appreciate all you have?” she asked simply.

I opened my mouth to argue, but nothing came out.

So the next morning, I began with my health, closing my eyes and sinking into the luxury of it. The blissful pulse of life I am so privileged to embody. The tickle of air entering the tunnel of my nostrils and wafting into my chest. The light-song singing into my cell tissue. Then to my pillow—lucky head. My hot water bottle—grateful toes. The blanket of colorful warmth around my body.

I slide out of bed, don a sweater, and snuggle soft stitched leather around my feet. Blessed moccasins hold me above the chill of the floor, as I tiptoe past two boys sleeping in the next room and smile at the gift of their being there. I crouch in front of the wood stove, assemble a small pile of kindling over a curl of birch bark, and reach for matches—striking into another wonder: fire in a box. Access to life-giving heat with one measly flick of the wrist.

I thank the cold for charging me awake rather than wincing at the discomfort of it.

I add a few lengths of chopped wood, content in knowing that in less than an hour, the house will be warm again. In the meantime, I slide into snow pants and reach for my boots, astronaut-sized clunkers that come up to my knees. I pull on my coat and, lastly, I add mittens so cozy that they’re like tiny duvets. I give my fingers a moment to wiggle around their soft surroundings before heading outside.  The air is so cold it slaps my face, lifting my energy instantly. I listen to my heart pick up its pace, feel it in my ears, its determination to keep me alive. Turning, I face a rare sight in these parts: the sun. Today there is a thick yolk of light surfacing on the horizon and the sky is a Mexican ceramic blue.

Inhaling, I reach up, touch the tips of my mittens together. Exhaling, I pull a piece of the sky to my heart. Inhaling, I arch back into an invocation of flexibility, fearlessness, a willingness to bend toward what I cannot see. Exhaling, I bend forward to touch the earth. One boot flies out behind me and I push into postures of agility and strength, the sun warming my teeth as I smile. Snow crunches against my wrists. I lift and lunge, stand and reach, my hands gathering into prayer position and drawing down, slowly, to my heart. “Snowga,” my partner calls this new habit of mine: yoga in the snow.

Often I burst out laughing, especially when images of people doing asanas on tropical beaches come to mind, yet I take this practice seriously. This practice of seeing the rightness in everything rather than zeroing in on what seems wrong. Of thanking the cold for charging me awake rather than wincing at the discomfort of it. Of admiring the beauty of snowflakes and storms. Of appreciating my own wondrous breath and the kindness of a stranger who “un-belly-hangs” my car. It is a practice that invites happiness to arise.

Once I get the hang of it, I add one more step to the practice: dropping the labels altogether and simply allowing things to be as they are. Neither “right” nor “beautiful” nor “bloody cold.” Just as it is—this moment, this life.

My breath puffs beyond my lips. A spiral of smoke rises from the chimney. I bow to my health. To my stepfather. To this day. In the distance, a family of deer leaps along the horizon, antlered angels skimming across a cloud.

I bow to them and head inside.

It is time to chop wood and melt snow for tea.

Alison Wearing is a Canadian writer and performer. Her new book, Moments of Glad Grace, will be published the fall of 2019.